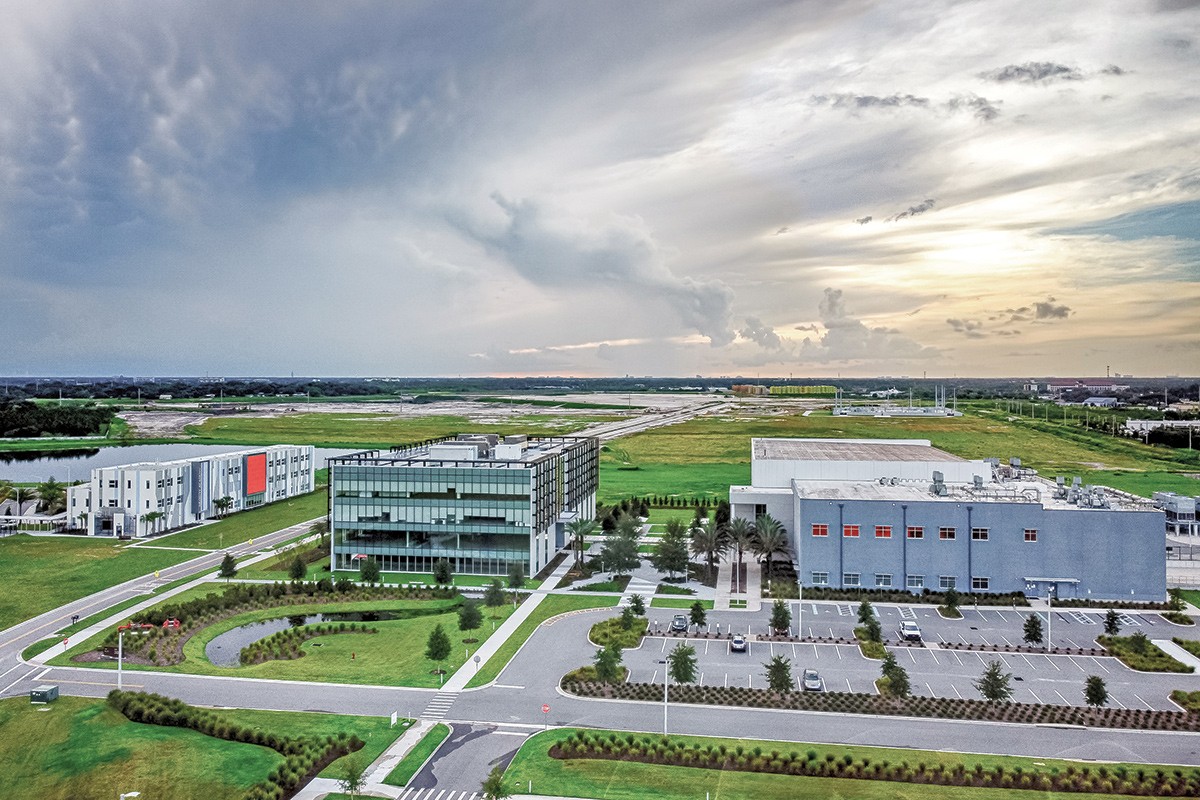 Osceola County's effort to launch a chip-making facility has struggled, but the county recently landed a promising new business partner at NeoCity. 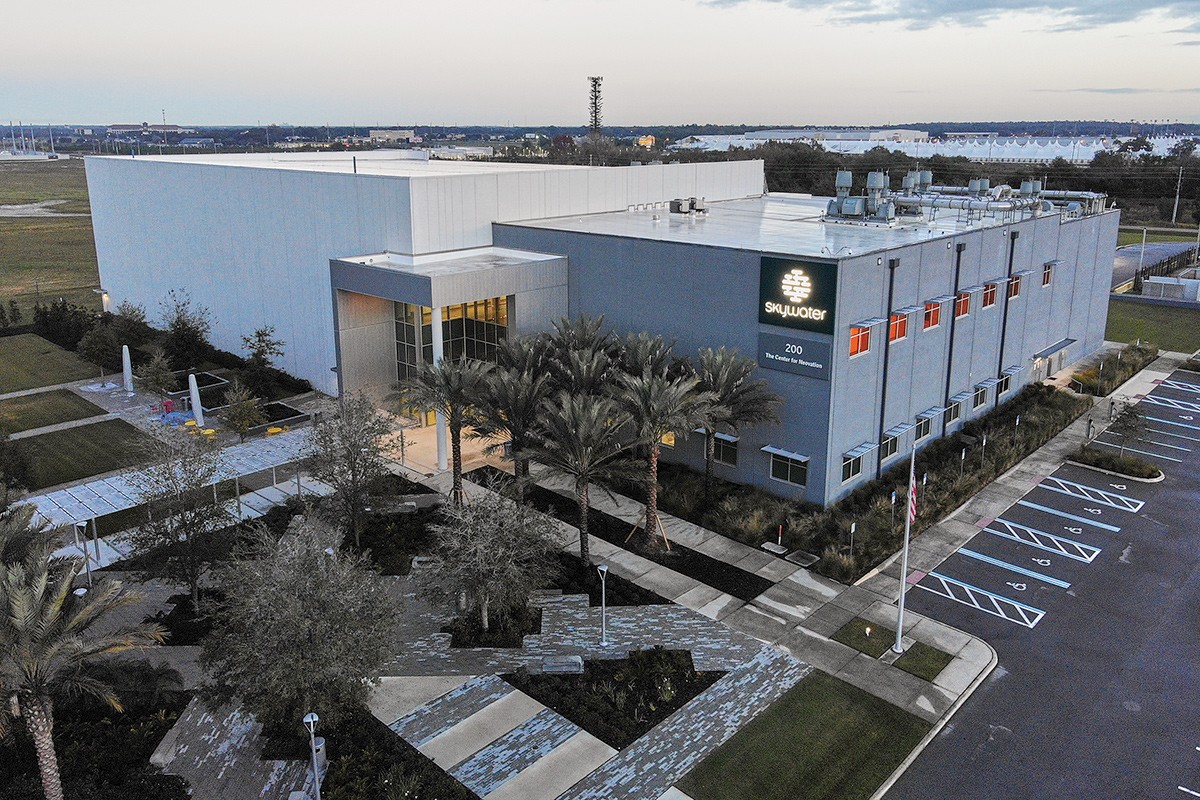 The Center for NeoVation is a 109,000-sq.-ft. semiconductor manufacturing facility operated by SkyWater Florida. 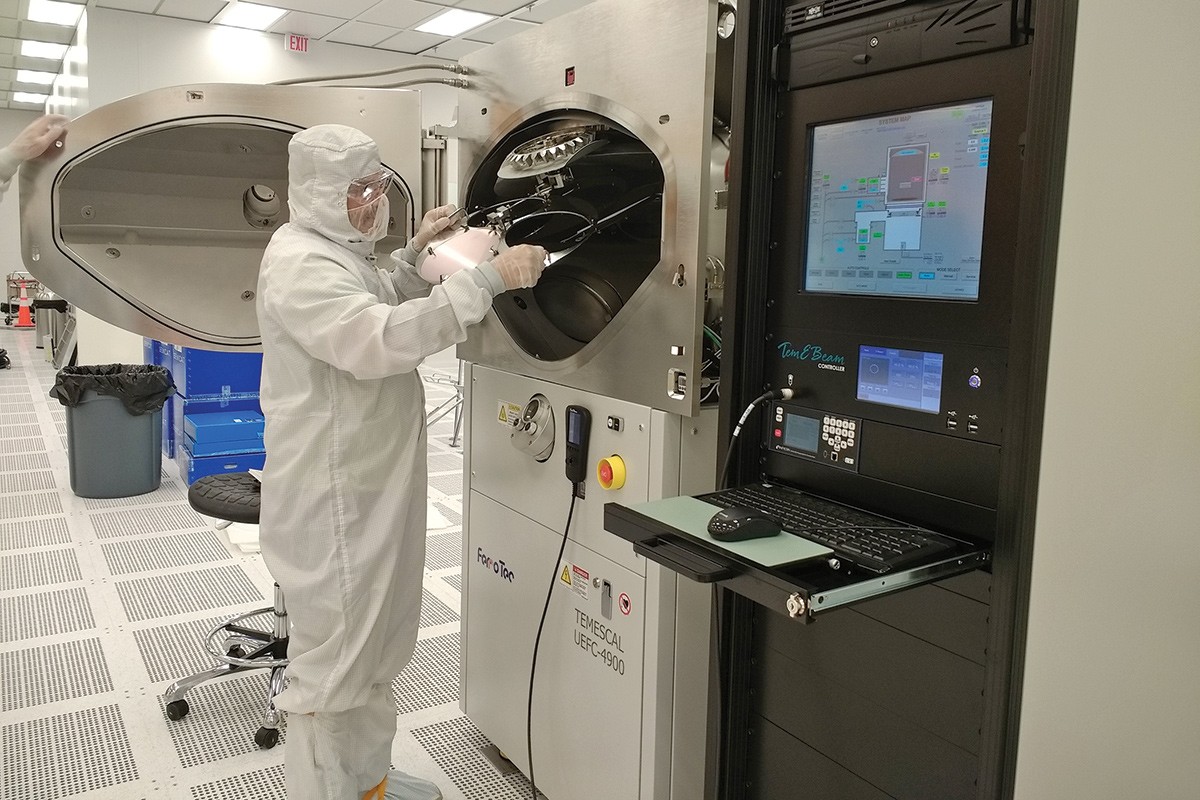 Chip maker SkyWater has invested nearly $1 million in its NeoCity facility. It expects to create 220 jobs in the next four years. 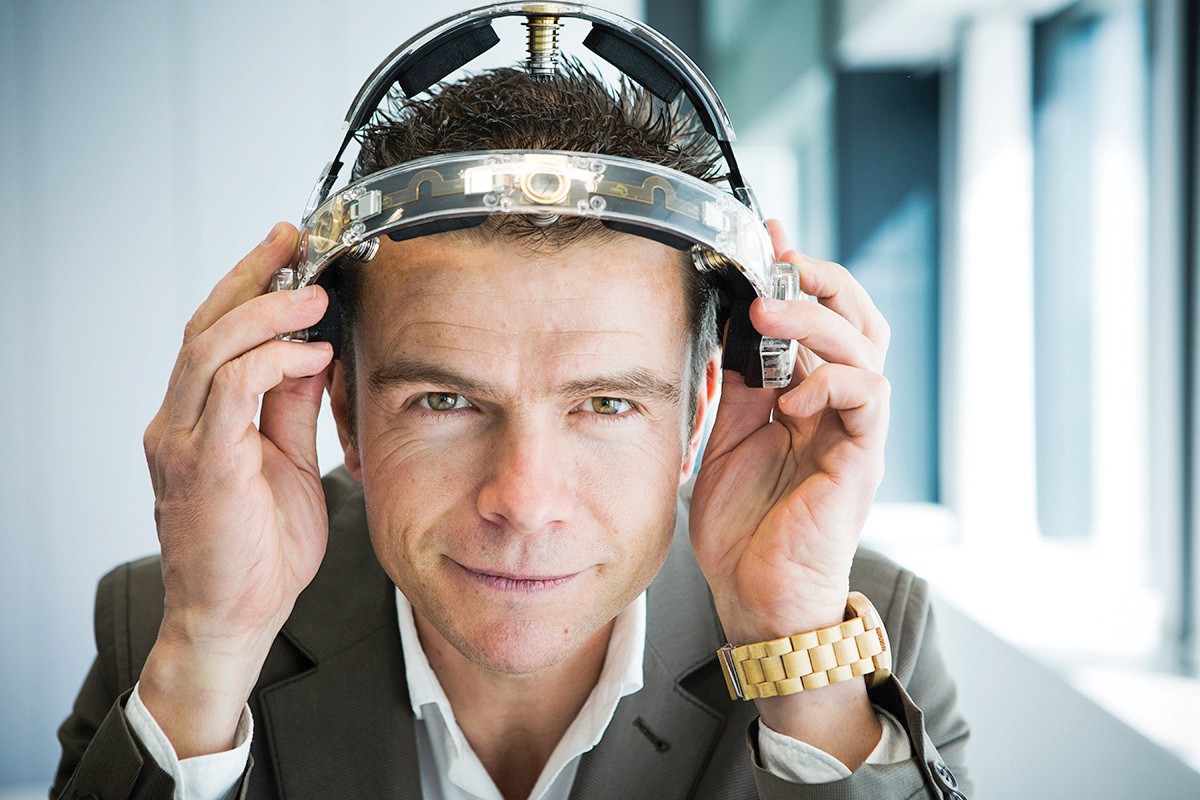 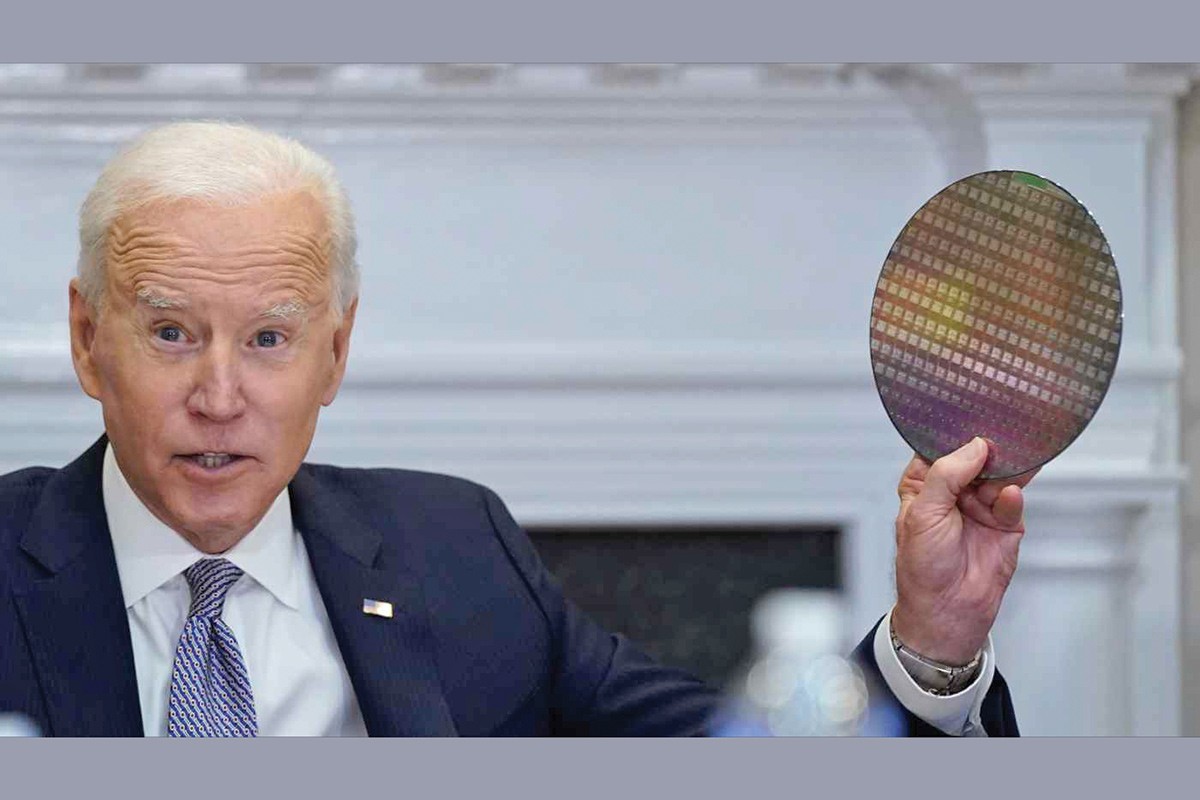 President Joe Biden holds up one of SkyWater's silicon wafers during a meeting about supply chain issues. 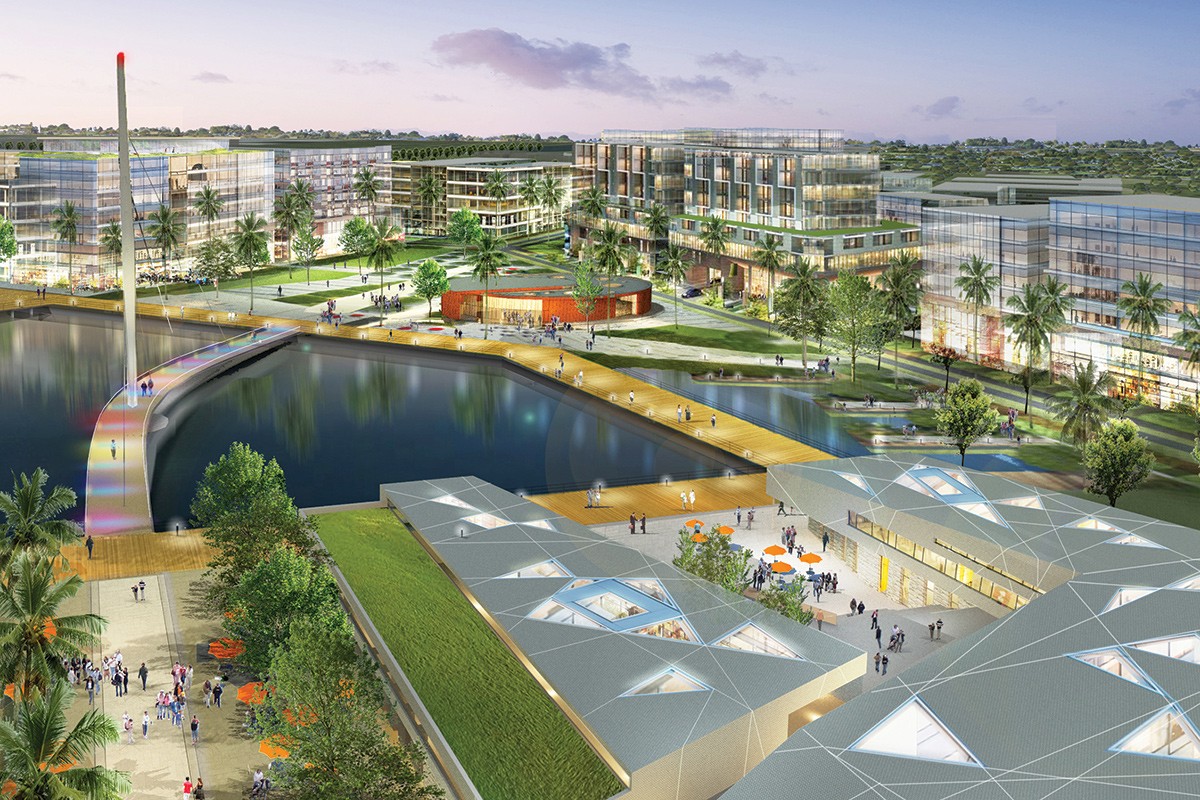 NeoCity plans call for a Central Plaza (center of illustration) and a conference center (bottom right), along with office buildings. 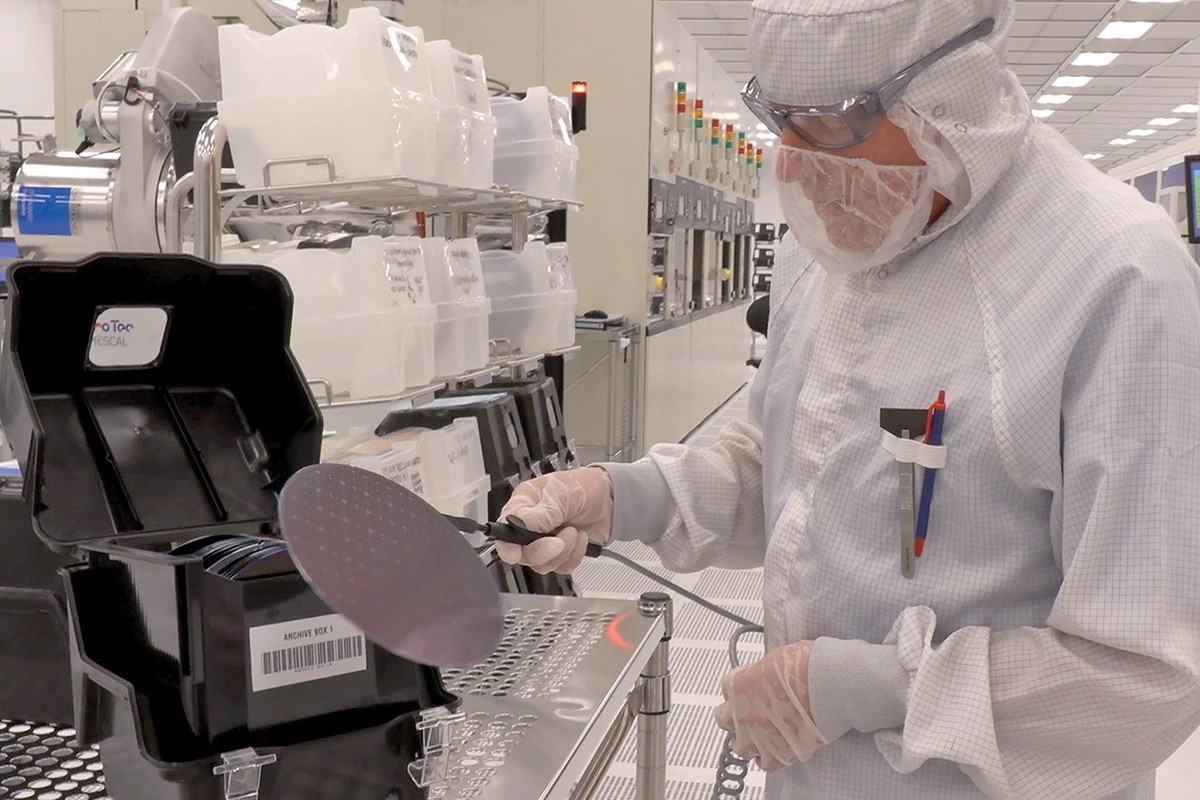 Osceola County has become the fastest-growing county in Florida, reaching a population of 388,656. But with an economy rooted in hospitality, agriculture and residential construction, wages have remained low. Average per capita income is about $8,260 lower than in neighboring Orange County and lags the state average by about $10,700. County Manager Don Fisher says the county knew a decade ago that “we needed to take steps to change. We needed to do things to make it happen.”

In 2010, a deal with a home builder left the county with a 485-acre chunk of former dairy farmland just south of U.S. 192 between Kissimmee and St. Cloud, on the edge of Lake Tohopekaliga. The county considered building an amateur sports facility, then a $160-million two-team spring training complex, but both of those plans fell through.

Neither project would have done much to diversify the economy, and some in the region began looking for a more transformational venture. Backing the push were a raft of the region’s leaders at the time: UCF President John Hitt; M.J. Soileau, UCF’s vice president for research and commercialization; EDC President and CEO Rick Weddle; Randy Berridge, head of the Florida High Tech Corridor Council; and Orlando attorney Charlie Gray.

Their first effort, called Project Galaxy, involved a collaboration between the county, the University of Central Florida and the Orlando Economic Development Commission to try to lure an Albany, N.Y.-based organization called Sematech to the region.

Sematech, short for Semiconductor Manufacturing Technology, was a government-backed consortium of chip manufacturers that got its start in the 1980s in Austin, Texas, before moving to New York. The organization, credited with planting the seeds for Austin’s evolution into a high-tech mecca, decided to stay put, however, declining Osceola’s offer of 20 acres and $30 million to move to Florida.

The prospect of a high-tech economic development engine continued to tantalize county leaders, however. And in 2014, at the urging of Soileau and Fisher, Osceola teamed up with UCF and the tech council to start a new consortium of manufacturers focused on “next-generation” sensor technology. In essence, the region sought to create its own Sematech.

Osceola County and its partners kicked off their effort in 2014 by launching the non-profit International Consortium for Advanced Manufacturing Research (ICAMR), an “industry-friendly consortium for advanced sensors, photonics and optics.”

The effort got a boost in 2016 when Belgium-based imec — a pre-eminent nano and digital technologies research and development organization and a Sematech competitor — signed on as a partner. Imec was to provide circuit design work and consult on the project’s centerpiece, a $75-million, 109,000-sq.-ft. wafer fabrication facility — a “fab” in industry parlance — on 20 acres. The plan called for UCF to run the clean-room facility and fund its operations.

The project’s creators expected the fab to draw interest from private companies who’d pay membership fees to use its clean room and share in intellectual property developed there. But that interest never materialized, and by the time the chip-making facility opened in early 2017, the effort was rebranded as BRIDG (Bridging the Innovation Development Gap) — and had a new strategy based on securing military contracts.

BRIDG succeeded in snagging a $20-million contract from the U.S. Department of Defense and a $7.5-million contract from the Air Force Research Laboratory. But the government work didn’t generate enough revenue to cover the facility’s $25-million annual operating costs. Meanwhile, state financial backing — $22.5 million as of 2020 — never reached the $25 million a year the initiative’s organizers had anticipated.

BRIDG’s woes deepened during the pandemic. In 2020, Gov. Ron DeSantis vetoed $10 million in appropriations BRIDG had hoped to get. Shortly thereafter, UCF ended its contract with the organization and laid off more than two dozen BRIDG employees who’d been on its payroll. “UCF was obligated to operate it for 35 years. We built the facility. They ran it,” says Fisher, Osceola’s county manager. “It was a good deal that didn’t end up working out.”

The county’s hopes now rest with a new partner — SkyWater Technology, a Bloomington, Minn.-based niche chip maker that supplies chips to the U.S. military and other customers. John Cooney, SkyWater’s director of government affairs and a former U.S. Commerce Department official, called Fisher in August 2020 (shortly after then-Commerce Secretary Wilbur Ross had visited BRIDG) to express interest in the site.

The company was looking for an opportunity for its advanced packaging services — a process that involves assembling multiple chips into a single electronic device in a way that saves space and improves performance — and the BRIDG facility had infrastructure the company could use.

Currently, nearly all packaging is done overseas. But the worldwide chip shortages during COVID-19 and security concerns have prompted a push to expand production in the United States.

Brad Ferguson, SkyWater’s Florida senior vice president and general manager, expects the advanced packaging segment will “explode” in coming years. “We saw the potential and chose to make this financial commitment and open up this facility (in Kissimmee) under the Sky- Water banner because we see this potential,” he says.

Since inheriting the facility, SkyWater has spent nearly $1 million installing equipment and hiring employees, according to the public company’s financial reports. As of January, it had more than 30 employees at the site and was looking to hire nine more. It expects to create 220 jobs in Florida by 2026. While the site isn’t generating a profit yet, Ferguson expects it to “turn the corner.”

The success of Osceola County’s partnership with Sky- Water may depend largely on whether the push to reshore semiconductor manufacturing in the U.S. can gather momentum — and government funding.

During the pandemic, disruptions in semiconductor supply chains have slowed production of automobiles, appliances and other electronic products. Bert Gyselinckx, vice president and managing director at imec USA, raises the more ominous specter of possible economic warfare with China. A Chinese blockade of the ports of Taiwan, which manufactures more than two-thirds of the world’s semiconductors, would create a supply chain crisis much worse than during the pandemic, he says.

The Biden administration is seeking to inject $52 billion into the industry to beef up production in the U.S. through the CHIPS (Creating Helpful Incentives to Produce Semiconductors) Act. The bill, which has bipartisan backing, has stalled in House of Representatives, but cities and states are already chasing the funds.

Those involved in the Osceola County effort believe SkyWater could give the region an edge in capturing some of those dollars. Its president and CEO, Thomas Sonderman, was one of a handful of semiconductor leaders invited to an online meeting with the White House last April. When President Joe Biden held up a silicon wafer as he talked about supply chain issues, the wafer was one of SkyWater’s.

Gyselinckx says he hasn’t seen such backing for the domestic semiconductor industry since the 1980s. “This is absolutely the right time” for a facility like SkyWater’s. “It’s better now than it was even when we started five years ago. I think everybody understands much better the need for having a system, a fab like this, locally in the U.S.,” he says.

Osceola County Commission Chairman Brandon Arrington says the county’s effort will require significant government support. The European research consortium (imec) received local government support of close to $300 million during its first 10 years and still gets $150 million annually. But it also generates 10,000 direct and indirect jobs for the region of Flanders, files about 150 patent applications a year and delivers annual revenue of $800 million. “There is a lot of upfront funding by the government to get (initiatives like this) off the ground. Then that financial gap starts to fill in with private dollars and continues to escalate off of that base funding from the government,” says Arrington.

Gyselinckx believes SkyWater and the CHIPS Act could be a game changer for Osceola. “At the end of the day, three, maybe four (semiconductor) centers are going to get the vast majority of the funds. Let’s try to make Florida one of them,” he says. “If we don’t take it, Arizona’s going to take it, or some other state will. It’s going to happen somewhere in the United States, so it might as well happen here.”

Niche: Only U.S.-owned “pure-play” foundry, meaning it makes chips for other companies and does not develop its own products

Notable: The U.S. Department of Defense has accredited SkyWater’s facility in Minnesota as a “trusted foundry” site for military semiconductor production, and the company is seeking the same accreditation for its Kissimmee factory.

Once More, With Feeling

Central Florida has bet big on the semiconductor industry before. Between 1996 and 2003, Central Florida and state officials gave Agere Systems and its predecessors more than $40 million in incentives to expand a microchip plant in south Orange County, hoping to create an industry cluster with high-paying jobs. By 2002, however, Agere had followed industry trends and moved most of its chip production overseas. The eventual buyers of Agere’s 220-acre property, Tavistock Development and Orlando architect C.T. Hsu, had no use for the microchip plant and demolished it in 2010.

Brandon Arrington, a longtime Osceola County commissioner who grew up selling watermelons on the corner of John Young and Main Street in Kissimmee, supports the SkyWater partnership. “We’ve seen how Osceola County always has the highest unemployment when peak recessions happen in our county, whether it was 2008 or during this most recent one with the pandemic. This really set us on a course to try to create that next leg of the economy.”