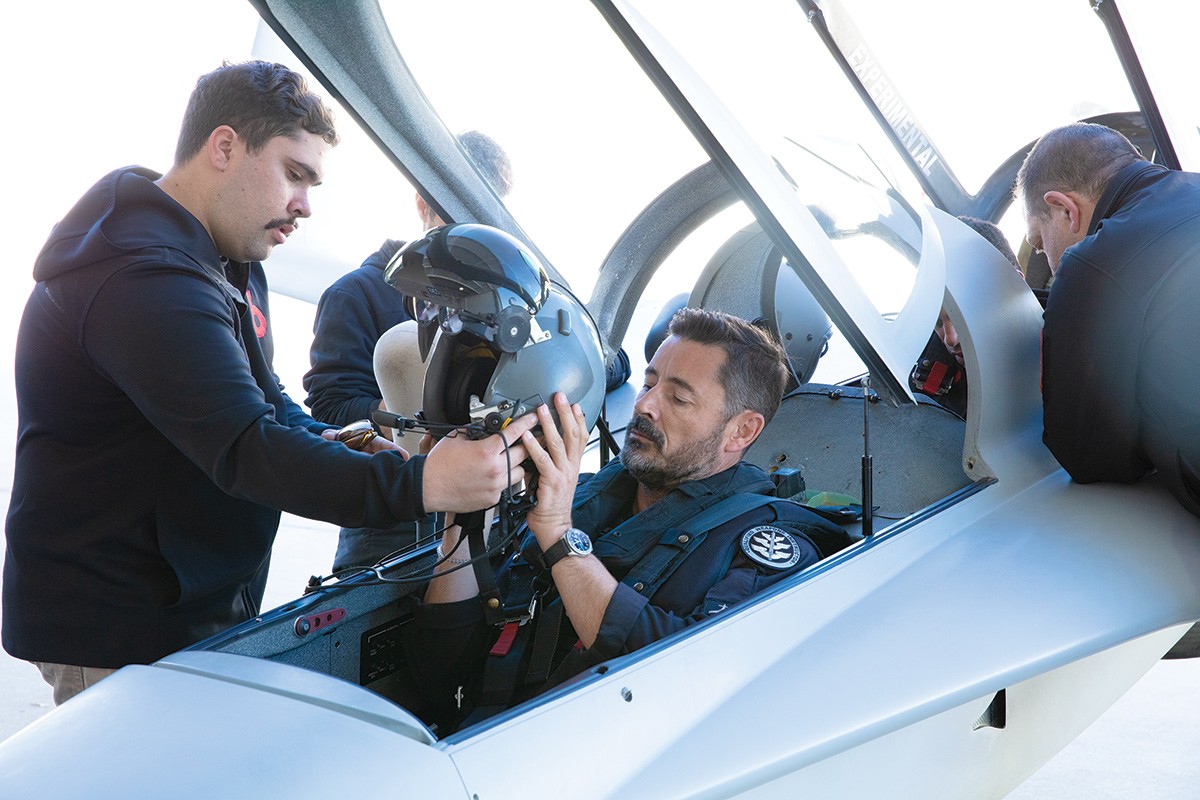 Red 6 co-founder Dan Robinson had a pilot's license when he was 15 and later flew for the Royal Air Force. 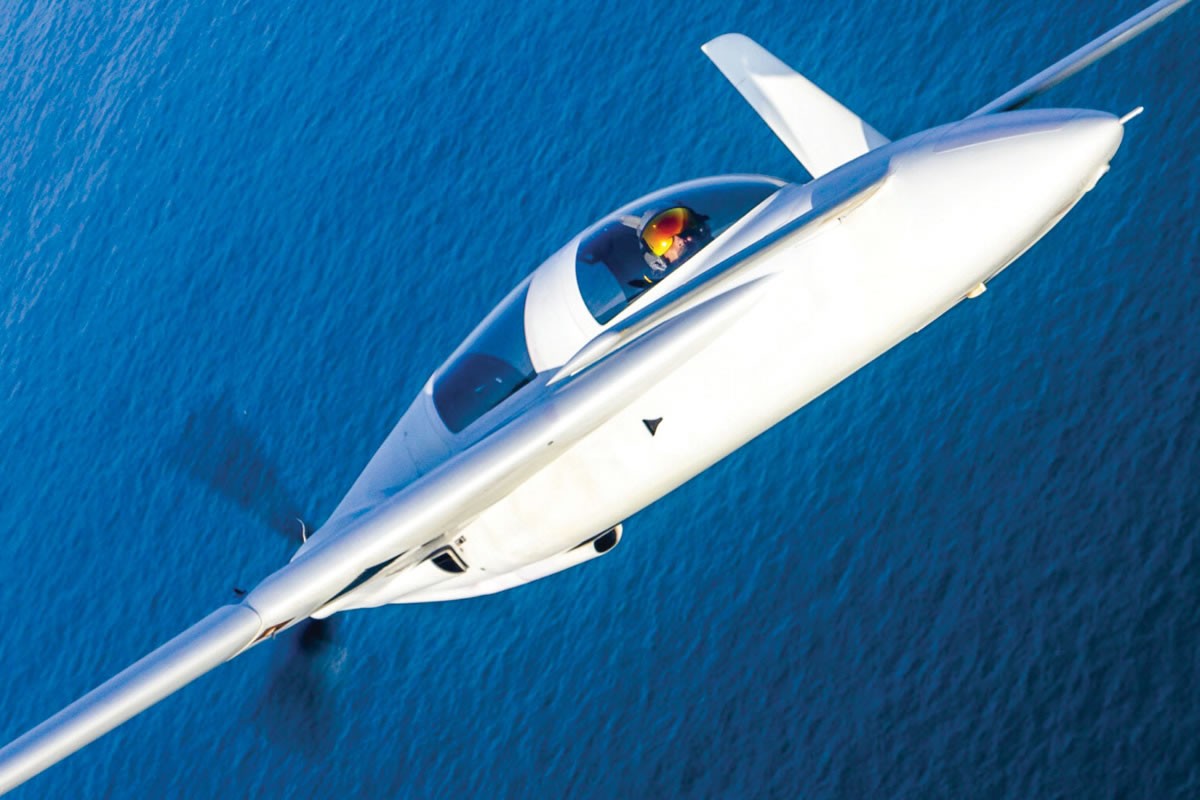 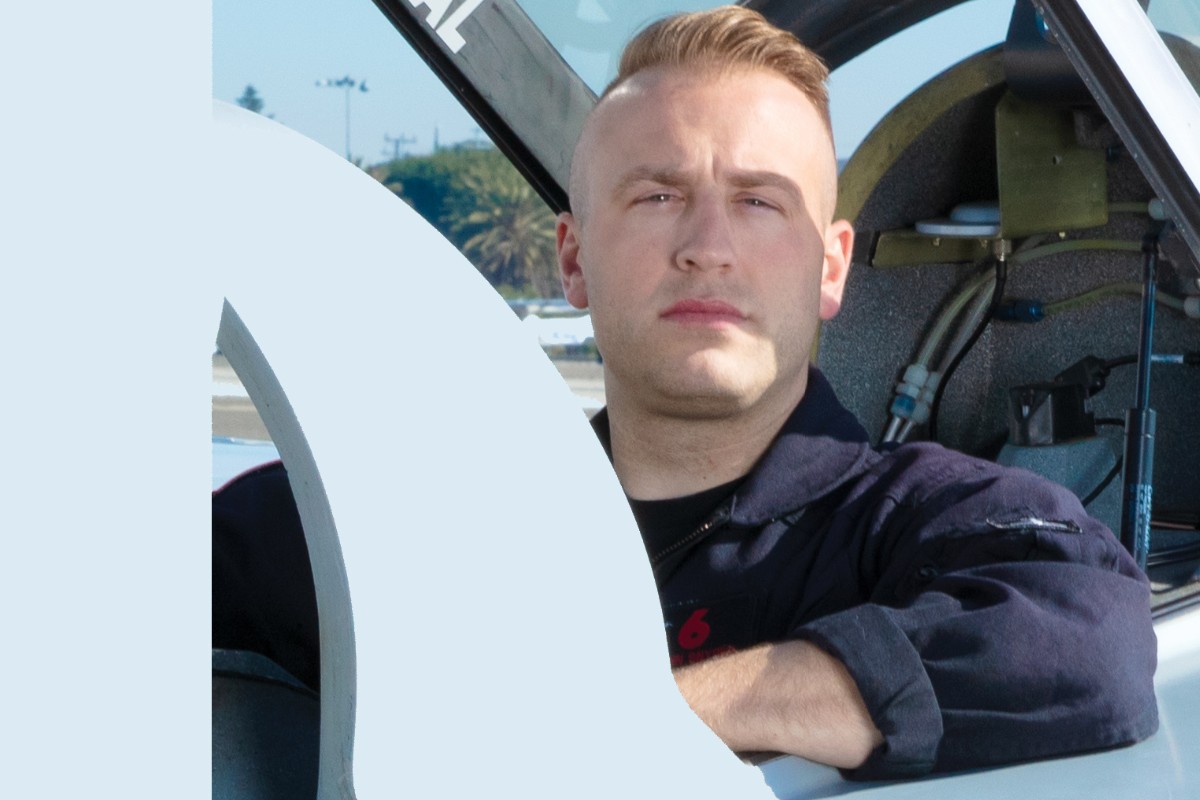 Red 6 co-founder Glenn Snyder, a programming prodigy, made a punching bad into a game controller. 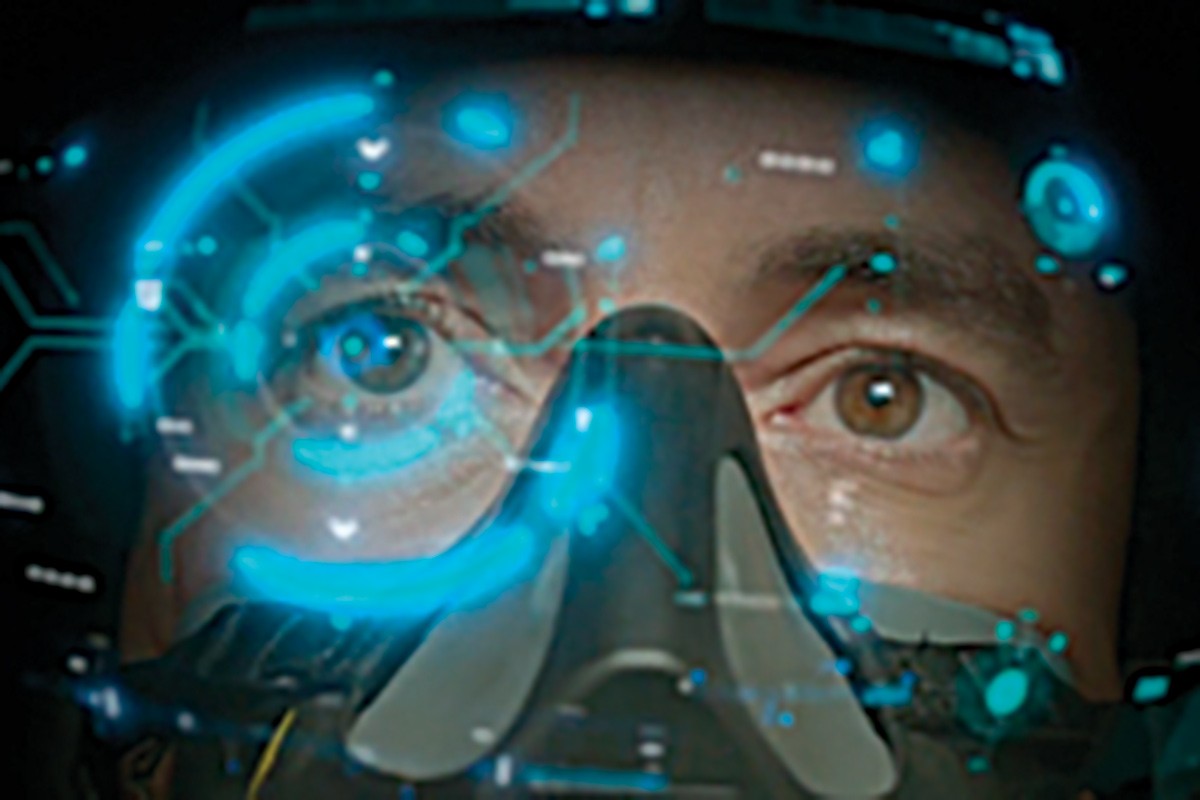 "I saw a home for augmented reality that can solve really defined pain points that I think represent a national security crisis," says Robinson. 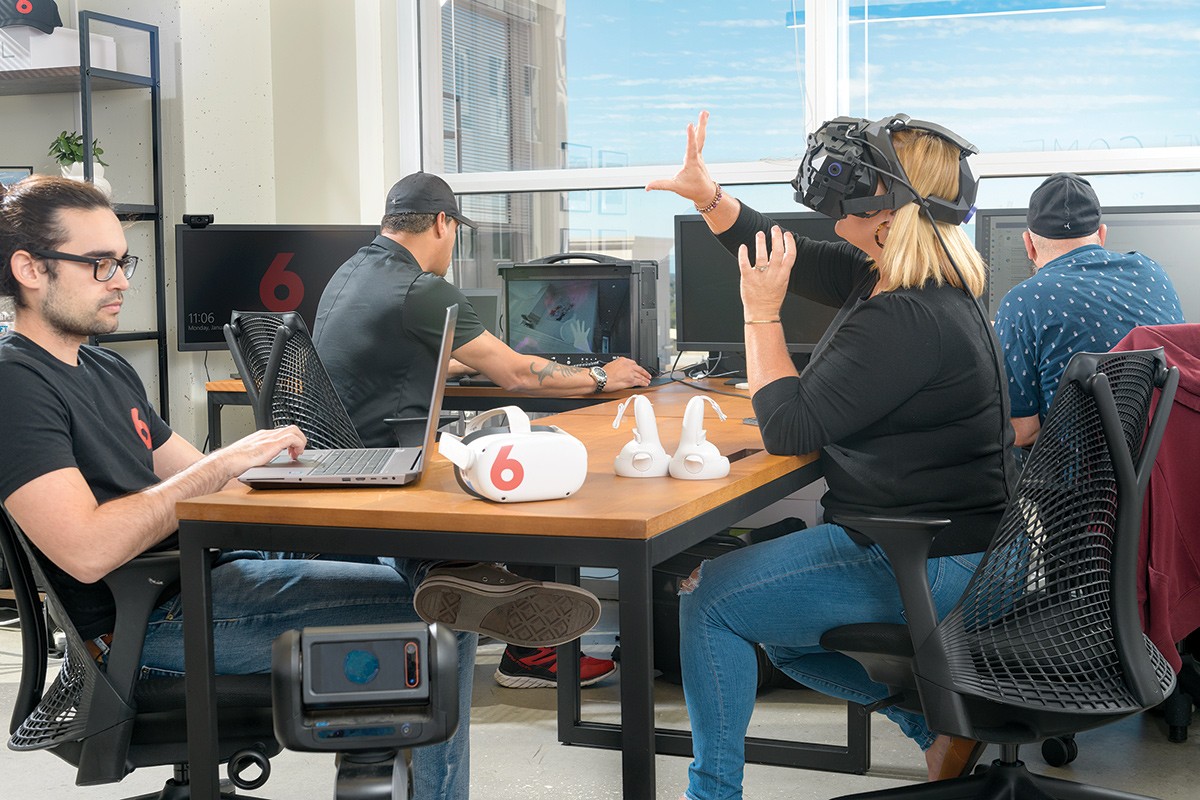 Red 6's Orlando hub will handle software and engineering functions for the company.

Red 6 aims to use augmented reality and A.I. to train U.S. military pilots

Dan Robinson, a soft-spoken native of northeast England, chats in a Miami Beach coffee house, his dog at his feet. Meanwhile in California, representatives of the U.S. Air Force test a video game-like technology his company is developing to answer America’s military pilot predicament.

The nation is short of pilots — by about 2,000 for the Air Force in recent years. It misses the mark in readiness. Training is expensive. “Accelerate change or lose,” Air Force Chief of Staff Gen. Charles Q. Brown Jr. said in 2020 directive to the service.

Robinson echoes Brown’s thoughts. “Whilst we’ve been involved in fighting the war on terror, China and Russia went to school on how to defeat the United States in high-intensity war fighting,” he says over tea. “If we don’t change, if we don’t do something about it, we’re going to lose. I started Red 6 to really do my part to solve what I think is a national security crisis.”

As a youth, Robinson earned money for flying lessons by rising before dawn to deliver milk. He had his pilot’s license at 15 — inspired, he says, by Superman, TopGun and Star Wars. He later joined the Royal Air Force. After graduating from Britain’s equivalent of the TopGun fighter school, he was chosen in 2005 to go to the United States to fly the then-new F-22 Raptor stealth fighter. He became the first non-American to fly the F-22 and spent three years as an F-22 instructor at Langley Air Force Base in Virginia.

“I fell in love with the United States,” he says. He earned an MBA at Georgetown and worked in finance for a year in New York. In 2011, after his father died, Robinson returned home and turned around the family construction business. He was named UK Director of the Year in 2015 by the British Institute of Directors, a business leaders organization.

Returning to the United States in 2018, he wanted a fresh start — California — and a “passion project” — building, from a kit, a Berkut 540 airplane capable of 300 mph and pulling 9Gs.

He met Glenn Snyder, a programming prodigy who’d majored in visual effects at the Savannah College of Art and Design and worked on feature films, including Ender’s Game. Snyder once made a punching bag into a game controller. And he developed a way to combine the virtual and physical: So, for example, two real-life racers could drive real race cars on two separate physical courses laid out identically. Images projected into their visors as they drove enabled them to race against each other in a virtual space where each could see the other’s car.

Robinson saw an opportunity to merge his passions of flying and national defense.

Historically, U.S. pilots trained against a “red team” of other American pilots who mimicked enemy tactics and capabilities. Then, in the mid-2010s, the armed services began privatizing that dogfight-training by contracting with private companies that acquired surplus military planes and hired pilots. (“Private Enemy,” page 59).

Robinson says the private adversary contracts aren’t cheap — and the third-and fourth-generation fighters they use aren’t good surrogates for the Chinese J-20s and Russian SU-57s that U.S. pilots could face. The faux combat provided by the private firms is a “vital part of the solution right now,” he is quick to say, but also a “temporary Band-Aid.”

The U.S. military already trains pilots using virtual reality, in which images are projected onto headset screens as the pilot sits in a simulator. Augmented reality, in which synthetic images are layered over the real world through a pilot’s visor as he’s actually flying, works better. The pilots see real clouds and landscapes, but the augmented reality technology projects images into their visors that let them experience midair refueling or combat without other planes actually being in the sky.

Seeking a solution in Florida

Traditionally, AR hasn’t functioned well outdoors against a blue sky with no features on which to anchor digital content, and it hasn’t work well at high speeds, such as in a dogfight.

Working in Santa Monica, Calif., Robinson, Snyder and Nick Bicanic (who is no longer with the company) founded Red 6 to develop a solution. The Berkut 540 aerobatic plane Robinson handbuilt served as the test vehicle, with him as pilot. Snyder perfected the software. “Glenn and I have spent hundreds of hours together, flying airplanes together, with him throwing up in the back seat,” Robinson says.

They presented their work to the Air Force’s innovation arm and its research laboratory and in 2019 won the first of three Small Business Innovation Research grants. They raised $30 million in a fundraising round in June that valued the company at $130 million and also were awarded a $70-million contract from the Air Force in 2021. Backers include Lockheed-Martin. The former head of the Air Force’s Air Combat Command, retired Gen. Mike Holmes, serves as Red 6’s chairman. Retired Adm. Bill Moran is also on the board, and Will Roper, former assistant secretary of the Air Force for acquisition, technology and logistics, is on the firm’s advisory board.

In July, Red 6 announced it would move to Florida with hopes of hiring 100 by the end of the year. The company cited Florida’s high-quality education systems, talent, economic growth, operating costs, government investment in infrastructure, business-friendly culture and access to military customers. The military bases its simulation offices in Orlando. While development continues in California, software and engineering will be built out in Orlando — “the home of all things modeling and simulation,” Robinson says. The corporate headquarters will be on the Miami bayfront.

Robinson and Red 6 join a long list of aviation pioneers and military aviators tied to the Sunshine State, including World War I ace and longtime Eastern Air Lines head Eddie Rickenbacker, for whom the causeway to Key Biscayne is named, and aviation trailblazer and land developer Glenn Curtiss. Amelia Earhart started her ill-fated worldwide flight from Miami. Pan Am got its start in Key West. The state was home to the first regularly scheduled air service — between Tampa and St. Petersburg.

And Florida also has a history with augmented reality. Plantation-based augmented reality company Magic Leap raised billions from backers, including Google-parent Alphabet, only to see its first product flop with consumers. Its record and that of other AR developers prompts industry headlines such as, “Why are we still waiting for augmented reality?” (Under a new CEO, former Microsoft executive Peggy Johnson, Magic Leap is focusing on a second-generation product for the health care, manufacturing and defense markets.)

At a panel held by the Air Force Association’s Mitchell Institute for Aerospace Studies in March, Robert Winkler, a staff member for the U.S. Senate Armed Services Committee, was asked how to get Washington to buy in on new technologies such as augmented reality. His answer: “What you need to see, writ large, is proof.”

At present, Robinson’s task is delivering the proof. The company is moving the tech from the experimental plane he built to the Air Force’s T-38 trainers. “It’s just been an incredible journey,” Robinson says. “I think we’re doing something really important. And it’s great to do it here in Florida.”

A simulated fighter aircraft is superimposed over a pilot’s view of his actual surroundings. The image can be controlled by artificial intelligence, a pilot on the ground or from another aircraft miles away.