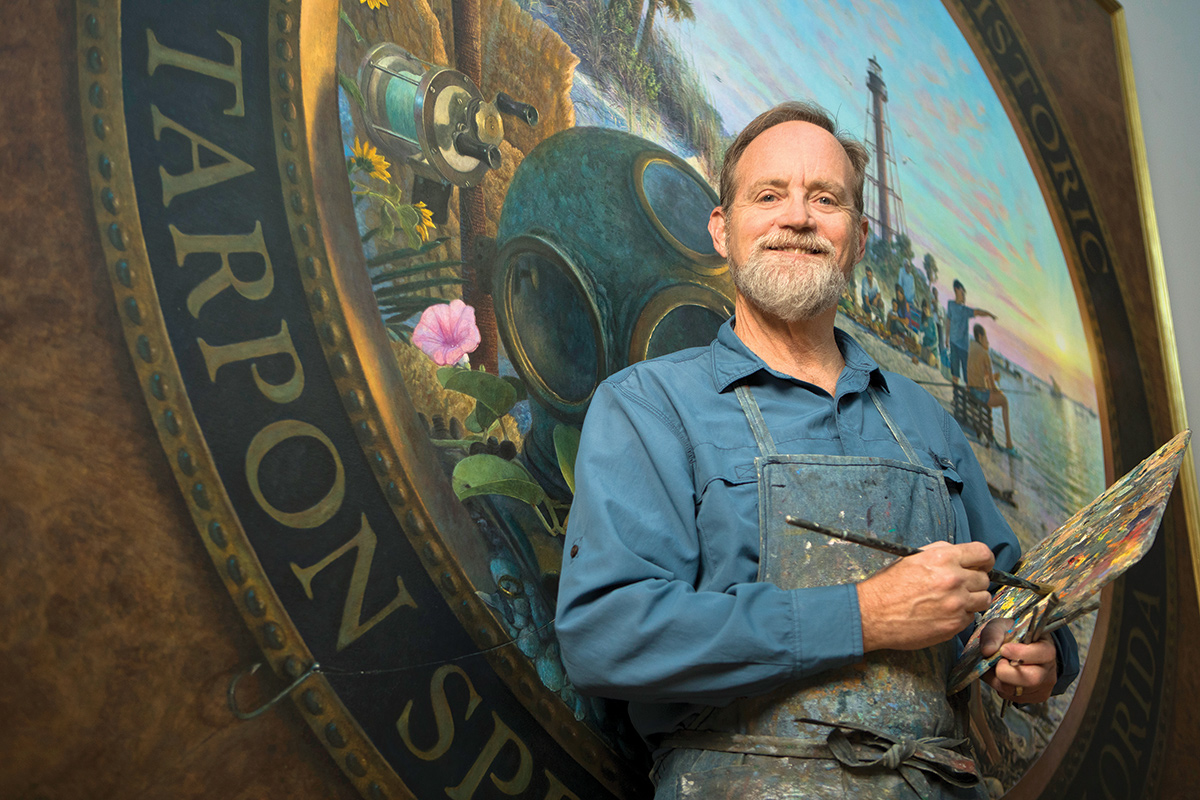 There’s a myth about artists. People like to think of the artist by himself in a field, a lonely individual, but what’s never talked about is the partnerships the artist has with patrons, with family, with friends.

During recess, I’d either have to stay in the classroom because I had asthma or because I was being punished for being hyperactive and talking or fooling around, but the teachers would always give me a stack of paper to draw on. I tried to do as many drawings as I could while everyone was at recess. I remember taping up all the drawings, so I’d have a show for them when they came back.

There has never been a problem with selling my paintings. Everything has always sold out very quickly. My biggest problem has been myself. I love working, and I’ve turned a one-year project and a one-year budget into me spending four years on it.

Our first house was in a grapefruit grove. Then, when we moved from there to Tallahassee, we lived in an apartment house near a creek and some woods, where I would explore and catch newts under rocks. When we came back to Largo, the grove was gone, developed. When we got back to Tallahassee, the creek was gone. A mall was on top of it.

I love eating. I see food as absolutely the cultural fabric of a place.

When I heard about the opportunity to paint murals in the Florida House Chamber, I thought this is me. All my work was heading toward this. The Florida House of Representatives would be my Sistine Chapel. I refer to John Thrasher as my pope.

I grew up with a reading disability. I didn’t know until much later that I cannot track left to right on a page. The spaces between the words, I see a pattern through and I have a hard time. I see the in-between. So I listen to books. I’ll come into my studio and do a 16-hour day regularly, so I listen to almost a book a day on Audible while I’m working. Jack Davis’ The Gulf, I love that. And also Rain by Cynthia Barnett. I love listening to the Sea of Cortez by John Steinbeck. Marjorie Kinnan Rawlings, I listened to Cross Creek just recently. I listen to a lot of Florida books.

People are hungry to see where they live expressed in art.

I could give three months to the surface of an orange. That’s the blessing I have that I feel like, as life passes, I may not understand a lot of things, but I do know the things that I’ve concentrated on very well.

We’re just now beginning to think about who we are and what we are as a state. We’re just beginning to curate our cultural history. Florida’s story is being written now, and I find that exciting.

I designed a box that enables me to sit inside it and paint underwater Florida scenes. I was in my box in Homosassa Springs, and I’m painting and this manatee comes by and is swimming circles around me, looking at me, and I’m looking right into this manatee’s eye. Florida is such a sacred place.

Probably the greatest achievement of my success is the attention that I’m given at Rusty Bellies Waterfront Grill in Tarpon Springs.

It has been interesting to see my paintings be part of political debates on the House floor, like during discussions on changing the speed limit for boats in manatee zones. Having an image there to remind people what a manatee is has value.

I moved to Philadelphia barefooted. I had never been up north. I had never been in a building taller than three stories. And that’s how I started my training at the Pennsylvania Academy of Fine Arts. I met someone there who introduced my work to an artist in Italy, and I left the academy to apprentice for an artist at the Vatican.

The summarized history of me is I have this amazing mother and father.

I’m getting older. I’m not saying all artists, but a lot of artists, and myself, are so excited like I am right now trying to share with you what I do. It’s like an insecurity complex where they want to share what they’re doing, and they’re excited to do it. But I’m getting to the point of thinking, ‘Hey, calm down and enjoy listening to the people around you more.’

Art has power. I don’t want to be a decorator. These aren’t just paintings to me. This is real. I’m trying to make a reproduction of how amazing the world is. I’m trying to say, ‘This is important.’

I was painting Christmas windows in a McDonald’s when I was in the fifth grade, and a person who had been watching came up to me and said, ‘You know, when you’re sitting there painting, you look like a real artist.’ I had more bravado as a child than I do now, so I was like, ‘Of course! I am an artist!’