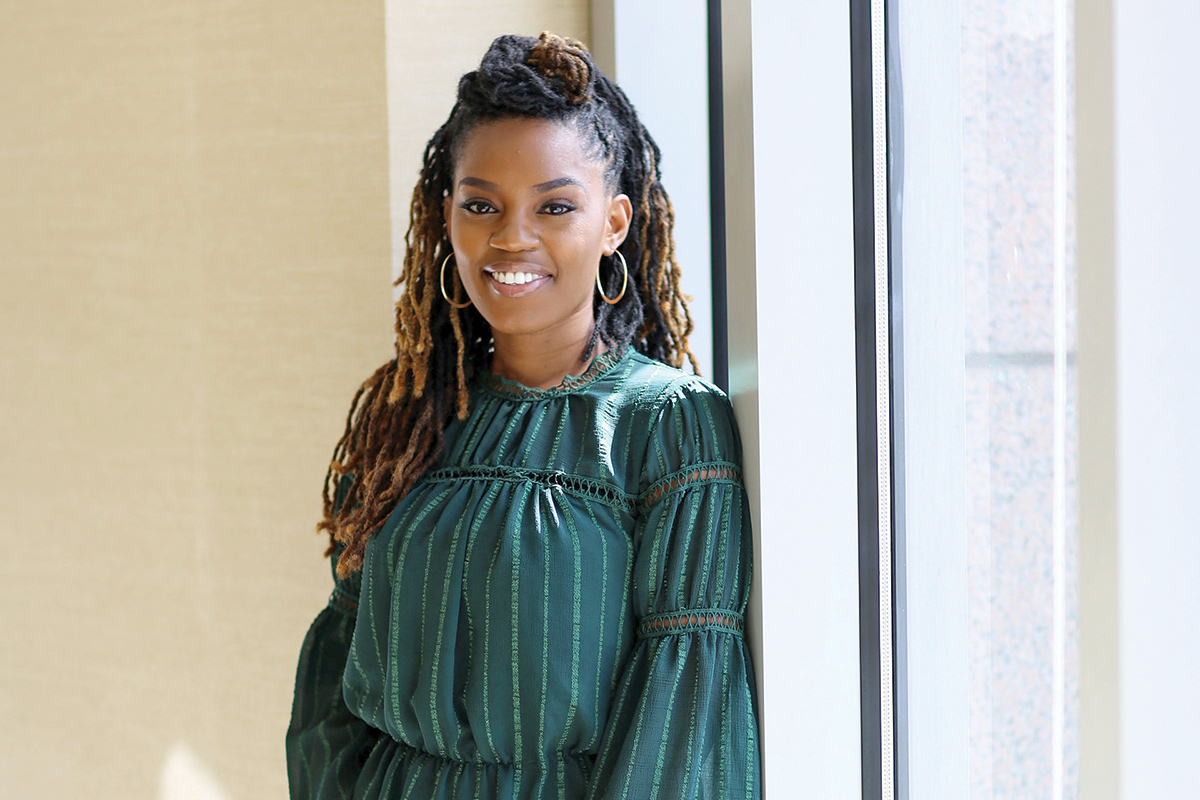 After trying a couple of business ideas that didn't pan out, ShaKeia Kegler eventually formulated the idea for GovLia. “As soon as an idea didn't work out, I was on to the next thing. That's something I gained in the Navy because we had to solve problems quick. You don't have time to sit around and worry.”

Gunner Zachary MacDonald affixes pins for both aviation warfare and surface warfare training onto Kegler's uniform. Kegler completed both qualifications within seven months of being on the USS George Washington aircraft carrier.

By 11th grade, ShaKeia Kegler had at least some of her life figured out — she planned to join the Navy after graduating from Gibbs High in St. Petersburg.

That didn’t please her mom, but for Kegler, the oldest of five sisters, the Navy was an immediate ticket to a job and a college degree. She could help support her family, particularly because money was tight and her mother had health issues, while securing her own future.

Today, 10 years later, the 28-year-old Kegler is a startup entrepreneur in Fort Lauderdale on a mission to make selling to the government easier for small businesses. While startup life may seem nothing like the structured military experience, Navy life prepared her for what would come after. “It turned out to be one of the best decisions I’ve ever made.”

Kegler’s first deployment was to Yokosuka, Japan, aboard the USS George Washington. “Imagine living on an aircraft carrier with 7,000 people? Crazy.” Kegler, though, had a plan: She quickly completed required Navy training and certifications and began college courses through American Military University taught by professors on the ship.

Over her three years in Japan, Kegler held jobs managing Navy supply purchases, developing training materials, updating regulations and assuring safety compliance, receiving several promotions. “I’ve always had a hustler mentality,” says Kegler, who developed a side business sewing patches onto sailors’ uniforms in order to send more money home while she was in the service. Port visits allowed her to explore Southeast Asia and Australia. “It was all a pretty cool journey.”

For her next deployment, Kegler requested San Diego. Instead, she was shipped to the small inland town of Lemoore, Calif. “It always smelled like cows, and they had a ton of cows everywhere. It was not what I expected.” This time, she was stationed on the naval airbase and deployed onto the John C. Stennis carrier offshore, arming missiles and uploading them onto aircraft — manual labor. But she wanted to put her new business knowledge to work. She finished her bachelor’s degree in business and received early discharge before starting year five.

Then came culture shock. “Life hits you fast. You start to feel like everything you accomplished just doesn't mean anything anymore.” She moved to South Florida, where the CareerSource Broward job agency helped her find a position in a pharmaceutical company selling products to the government, allowing her to “see the full picture” of procurement in action.

Kegler learned about federal contracting in two years at the pharma company, but she was itching to run her own company. In 2017, she enrolled in a seven-month startup program by Broward College and CareerSource.

After trying a couple of business ideas that didn’t pan out, Kegler eventually formulated the idea for GovLia. “As soon as an idea didn’t work out, I was on to the next thing. That’s something I gained in the Navy because we had to solve problems quick. You don't have time to sit around and worry.”

Indeed, government agencies have certification and set-aside programs aimed at drawing more bids from small businesses owned by women, minorities and veterans — but these programs come with even more government paperwork than usual. “We love these small-business programs for what they're supposed to represent, but they also add an extra barrier to the process,” Kegler says. Initially, GovLia is focusing on contracting by state and local governments, whose certification processes often differ.

In the process of developing GovLia, Kegler interviewed more than 100 women-owned and minority small businesses. They wanted to go after contracts but didn’t know where to start.

“What we wanted to do is be that one platform where businesses could create profiles and get registered, certified and bid on opportunities with multiple government agencies.” That also includes accessing smaller contracts that don’t go out for bidding but can be a good source of “past performance” for landing larger contracts later. GovLia’s tools can also help public procurement leaders looking for companies that will diversify their supplier base. “There’s a lot that can be changed, and that can change a lot of lives.”

GovLia launched an updated supplier portal in February 2020. Kegler has financed the startup with winnings from a half-dozen pitch competitions, funding from the Camelback Fellows program and revenue from consulting services.

GovLia Academy offers a series of videos and written lessons to help small businesses kickstart their work with the government, military or other public agencies and provides materials such as example bids and a capability statement generator. The podcast includes interviews with procurement officials and prime contractors.

For small businesses, the supplier portal is free, and the academy starts at $299 for a year’s subscription. The academy has nearly 100 paying students.

New training materials are developed as needed, just as Kegler did in the Navy using her research skills to create and update training tools. “Basically everything I learned in the Navy is coming full circle.”