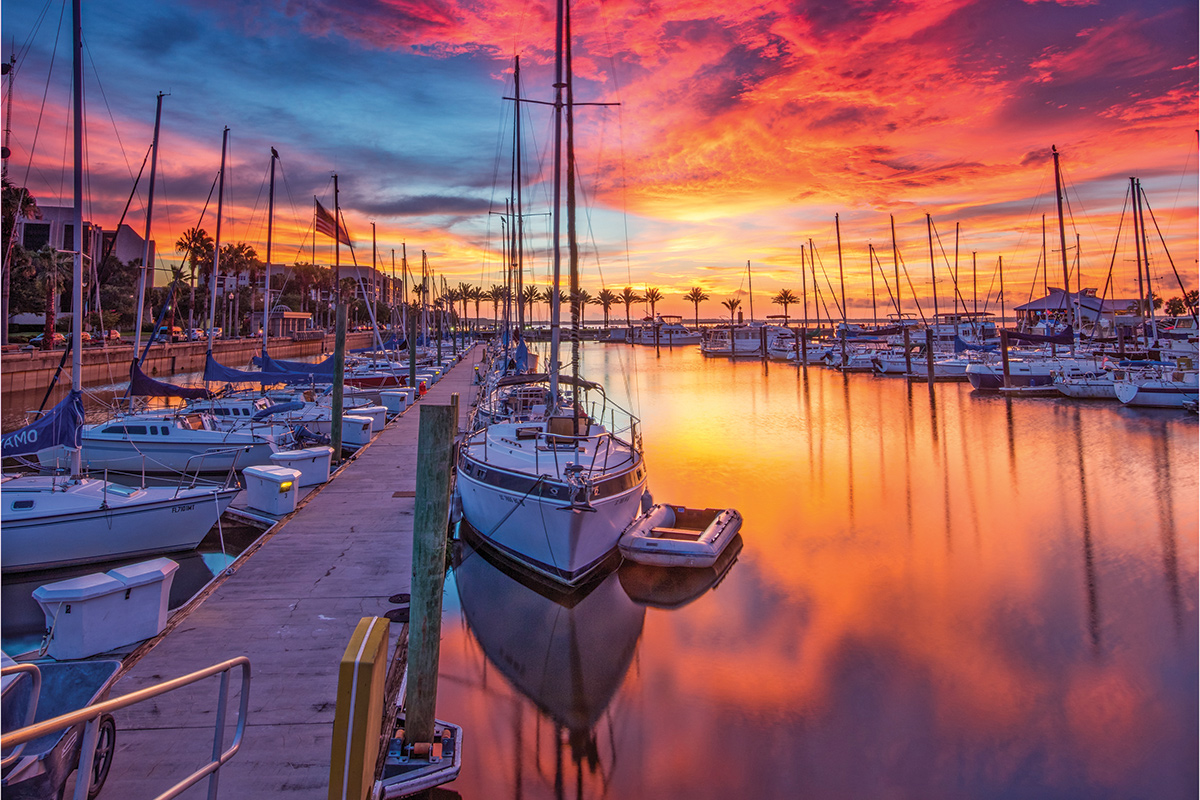 Sanford the Gateway City | For Growth, Opportunity and Fun

Did you know that for at least the past 140 years Sanford has been referred to as the Gate City? It’s true — Google it. In fact, Sanford is Florida’s Original Gateway City, capital letters.

The “gateway” label was based on Sanford being the southernmost navigable point on the St. Johns River. And it remains the same today — a gateway to the rest of the state and beyond.

Whether your business is a start-up or a Fortune 500 Company, the City of Sanford is a premier spot for your enterprise. Sanford’s “gateway” location within the Orlando Metropolitan Area means you will have access to talent, transportation options and unrivaled community assets. Sanford is widely regarded for its quality of life. If you haven’t seen Sanford lately, you’re missing the other half of Orlando.

The Gateway City of Sanford has much to sell. As a matter of fact, we use a verb to describe the unique experience of our City: “Sanfording.”

For starters, Sanford is the county seat and Seminole County’s most populous city (nearly 62,000 people with a growth rate of about 15% since 2010). And, even as COVID-19 descended on the region, there was noteworthy growth.

Gateway to Growth
So, call Sanford a gateway to growth, too.

One example: Since the razing of the San Leon hotel way back in 1917, no new structures ad been built on the prominent corner of 2nd Street and Sanford Avenue in Downtown Sanford — until now, thanks to the San Leon Mixed Use Development. It’s an urban infill project that features new residential and retail as part of a three-story, New Orleans-style building and an adjacent single-story building. San Leon is a vertical mixed-use project that beckons back to the founding of the city, consisting of ground-level retail, with residential uses on top floors. The project represents a tried-and-true development trend that Sanford will see replicated throughout its downtown.

Gateway to Opportunity
As Sanford grows with residents, it also grows with businesses attracted to our talented labor force. Our healthy employment base is complemented by multiple resources to help keep our labor force strong — including 23 major colleges and universities within a 50-mile radius.

For example, Seminole State College of Florida, established in 1965, serves nearly 30,000 students across six sites in the county. A comprehensive college, Seminole State has awarded more than 100,000 credentials, from bachelor’s degrees to high school diplomas, and offers more than 200 degrees, certificates and programs.

Preparing the future work force is a priority for Seminole State. To illustrate, in 2020, its Associate of Science degree in network services technology was named a winner of the Excellence and Equity in Community College STEM Award by the Aspen Institute College Excellence Program and the Siemens Foundation. Also, in 2021, Seminole State and Orlando Health launched a partnership to expand Orlando Health’s Preferred Education Program, enabling full-time and part-time hospital staffers to pursue academic degrees and technical certificates, with the program covering 100% of the tuition.

Further, a new academic school at Seminole State is incorporating the former School of Engineering, Design and Construction and the former School of Academic Foundations to create the School of Construction, Design, Engineering and Information Technologies. The new school now is home to a wide variety of professional disciplines, ranging from computer programming and digital media to interior design and project management.

The University of Central Florida represents another substantial resource. UCF partners with Seminole State to offer DirectConnect to UCF, a nationally recognized program that provides guaranteed entry to UCF for all Seminole State students and alumni who obtain, or have previously obtained, associate degrees. UCF, with its main campus in Orlando, not far from Sanford, has an enrollment of more than 70,000 students, with 13 colleges offering more than 230 degree programs.

Additionally, at last check, Seminole County Public Schools (K-12) was an “A”-rated district with a graduation rate that exceeds 92%. And SCPS is a member of the League of Innovative Schools, a national coalition of forward-thinking school districts organized by the non-profit National Center for Research in Advanced Information and Digital Technologies.

All totaled, Sanford has a work force of approximately 32,000 people, with 40% of them having an associate’s college degree or higher. Sanford is a historic city with a young population. With a median age of just 34, Sanford is Seminole County’s youngest city, and we believe the most entrepreneurial.

Gateway to Fun
Sanford knows how to have fun! How can we not — with a bustling, historic downtown that sits on the shore of picturesque Lake Monroe, part of the St. Johns River? The area boasts the Sanford RiverWalk, a multi-use pedestrian trail and destination for recreational enthusiasts. The site has received numerous awards for urban designed trails, most notably the International Making Cities Livable award in 2009. Earlier this year, a $28 million expansion of the Riverwalk was completed.

Downtown Sanford is marked by 19th-century buildings and plentiful shops, unique, chef-driven restaurants, quaint pubs and microbreweries. The city’s first brewery opened in 2014 and since has attracted plenty of visitors, as well as competitors, all within a few blocks. Today, the downtown district has evolved into something of a travel destination, complete with dinner cruises on Lake Monroe.

That setting has prompted area businesses to establish a Sanford Main Street initiative, with a mission to “preserve and enhance the historic charm” while “encouraging local spending, tourism and a sense of community.” The City of Sanford’s Community Redevelopment Agency provides a free downtown trolley that also connects to the Sanford SunRail station. By the way, historic Downtown Sanford is a mere 20-minute drive north of Orlando.

Other “fun” highlights are categorized under museums, hikes and city parks — more than two dozen city parks. Also, Sanford’s restored Wayne Densch Performing Arts Center is one of Florida’s “newest” facilities for the performing arts, although originally opened in 1923. Simply put, there has never been a better time to experience “Sanfording.”

One indicator of all that fun is a surging market in home construction. Consider this: While construction throughout the entire county has been strong in the past two years, the most single-family home and townhome construction occurred in Sanford.

Gateway to Everywhere
Finally, no city can be a true gateway without location and access, right?
Sanford boasts prime proximity to planes, trains, automobiles, and boats.
Nowhere is more evident than at the Orlando Sanford International Airport (SFB Airport) , where continual activity and expansion are occurring on its approximately 2,400 acres in Sanford.

Highlights include $65 million in recently completed improvements to the main terminal building to accommodate its growth with an expanded ticketing hall and the addition of four new gates. Strongly rebounding from the pandemic, the annual total passenger count is expected to regain its 3.5 million pre-pandemic passenger level with steady growth on the horizon with additional airlines and business tenants adding jobs to the community. Whether it is aerospace or non-aerospace businesses interested in establishing a presence in the Sanford area, Orlando Sanford International Airport has over 400 acres available for development with great highway access, rail access and a Foreign Trade Zone designation. The city, county and state offer a variety of development incentives.

Non-aviation growth also is in the works at Orlando Sanford International Airport, which is owned and operated by Sanford Airport Authority. Approximately 400 acres are available for development, with CSX Rail access, including nearly 350 acres in the Central Development Zone, which is located between two major runways.
On the roadways, Sanford benefits from the nearing completion of the multi-year I-4 Ultimate Improvement Project, which encompasses a 21-mile stretch of Central Florida’s most vital transportation artery. Serving as a complement, the Central Florida Expressway Authority operates a 125-mile toll road network that also continues to expand, connecting Sanford to downtown Orlando, area attractions, employment centers, the airports in Sanford and Orlando, and communities throughout Seminole, Orange, Brevard, Lake and Osceola counties.

Commuter rail service also is available via SunRail, which extends from DeBary in Volusia County (north of Sanford) for 49 miles (16 stations) to Osceola County (south of Orlando).

Sanford even is home to the southern terminus for the Amtrak Autotrain, with scheduled daily train service for passengers and automobiles between Lorton, Virginia (Washington, DC), and Sanford.

We invite you to go “Sanfording.” When you do, we believe you’ll be back for more.
For more information, please visit: www.sanfordfl.gov | www.flysfb.com | www.historicdowntownsanford.com | www.sanfordmainstreet.com