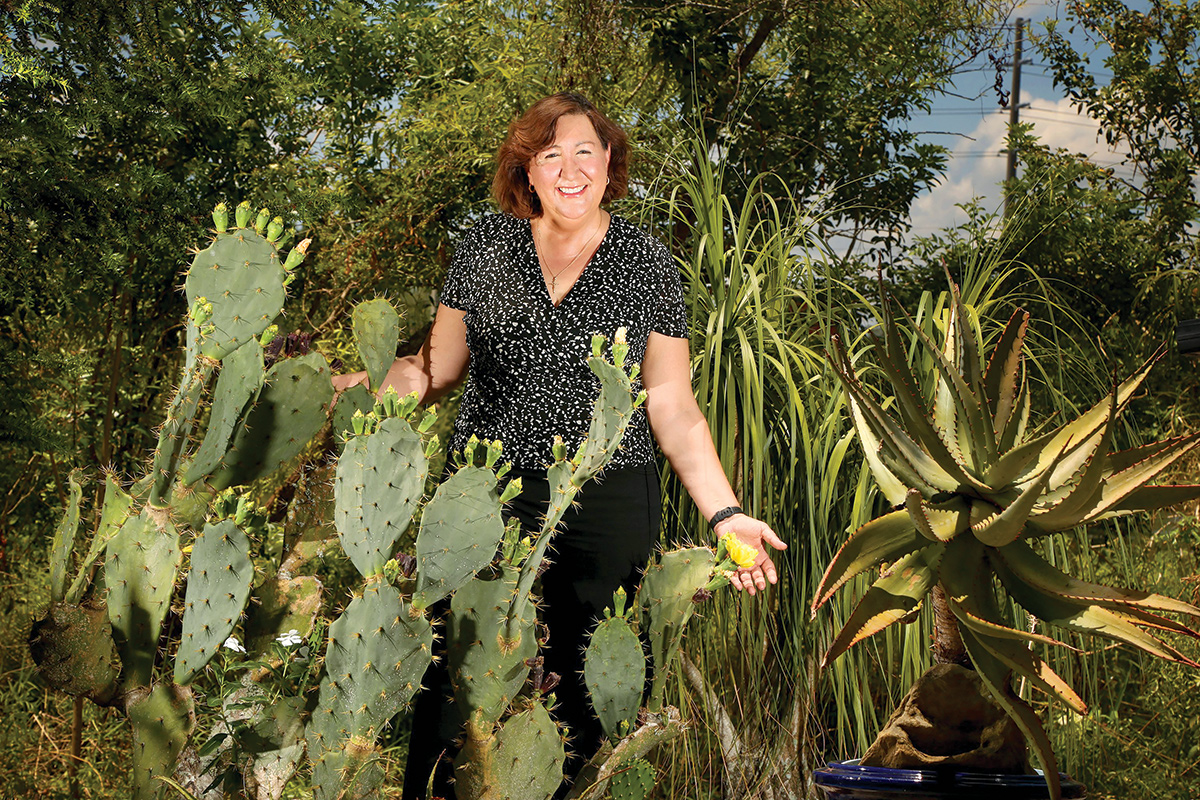 I grew up in Mexico City. My father died when I was 3, and my mother and I lived with my grandmother. My grandmother grew up on a farm and did not know how to write and read until she was about my age now. She worked really hard, pushing us to be educated, pushing everyone to stay in school and even go to college.

One day, when I was about 8, I was very upset about having to do my chores. We had to wash dishes. We had to sweep the house. I wanted to play, watch television or read a book. My grandmother said, ‘Norma, if you don’t want to do this when you grow up, then you have to do very well in school.’ I was like, ‘oh!’

When I came to USF in 2003, we wanted to do something fast. Academia is that way. Your first six years, you have to apply for tenure. You have to be successful in research, successful in teaching and do service to the university.

A lot of people are moving to Florida. It’s good for the economy, but it’s not good for the land being used for development. It’s sad to see green areas turning to housing. The animals that used to live in those areas, they cross the roads and are being killed. You see roadkill every day. That to me, it really hurts my heart.

I told my grandmother I was working on an experiment where we were looking at surfactants. I told her surfactants are kind of like the things you have in soaps and detergents. When you wash your hands, they take the dirt off. I was explaining this to her, and she was like, ‘Yeah, I know all about it.’ She said when she was little, she had to gather water from a pond or river and if it would rain, the day after the water would be very dirty. So she would take the water home and boil cactus, and the water the cactus was boiled in would clean the other water. I told my post-doc about my grandmother and the surfactants and the cactus water and said, ‘Why don’t you do an experiment, quick and dirty. Have two solutions with mud and then add the boiled cactus mucilage to one and see if it separates the dirt.’ Two days later, he comes back and says it worked. The sediments separated much, much faster than the one that had nothing. And that’s how we started.

I’m always looking for a Mexican restaurant. My husband is like, ‘Norma, you’re not going to like it. Why do you even try?’ But we try. Usually, the food is Tex-Mex. Like they will melt the cheese. Cheese is not meant to be melted! When you have beans, you add fresh cheese, not melted cheese. Or like when they prepare enchiladas, they give you tons of sauce. That’s not what an enchilada is. In Mexico, everything is fresh, like the nopalitos salad, cactus salad. It’s so delicious. You cut the cactus, and it smells so good. There’s no real way to describe it. It just smells fresh.

The coronavirus impacted research funding. In academia, you have to pivot to where the funding is, and now everyone is moving toward trying to get grants related to COVID-19.

When (former USF President) Judy Genshaft contacted me to say she wanted to nominate me for the Inventors Hall of Fame (floridainvents.org), I kind of said, well, I don’t know. There’s a lot of people who deserve it. Women in academia and women in engineering, we have a tendency to put ourselves down. We try to be to the side. We try to be modest.

Sometimes, I’ll go to the USF Botanical Gardens and bring my lunch, just to have a little bit of peace. If you want to get away from people and phones, that’s your place.

The Haiti earthquake happened in 2010. We were already doing a lot of experiments on how the cactus interacts with heavy metals. We thought we could apply the methods to clean water when disaster strikes, so we applied for money and went to Haiti. We were able to come up with a set of guidelines on how this can be applied in a country struck by disaster.

Life in Florida is very laid back. Even though my life is full of meetings and everything else, you can still have time to go outside and enjoy a beautiful day.

Nobody really knows how the plaques in Alzheimer’s disease form, so I thought that would be a niche for me. It was not until about 2013 that we realized the (cactus) mucilage could be instrumental in dissolving or disrupting the formation of Alzheimer’s disease plaques. This concept came after we discovered the properties of mucilage as a dispersant of crude oil. Since it could interact and separate large hydrocarbon chains, we thought we should test if amyloid beta plaques could be altered with mucilage. We found that it had an affinity, and that led to two patents on the subject.

Being from Mexico, sometimes I hear a comment or experience a microaggression. It doesn’t bother me for what it is, but it does bother me that so many people don’t understand diversity. Diversity brings new ideas and new experiences. It brings everyone together on the same team.

When I went to the National Autonomous University of Mexico, we lived in the north of the city, and the university is in the south of the city. Mexico City is so huge. It took almost a full hour and a half to get there, and that’s with no traffic. So I used to get up about 5 in the morning, drive to school because my first class was at 7, and my grandmother would always be up and have my breakfast ready. I would not come home until late at night — and my grandmother would always be home, waiting for me.