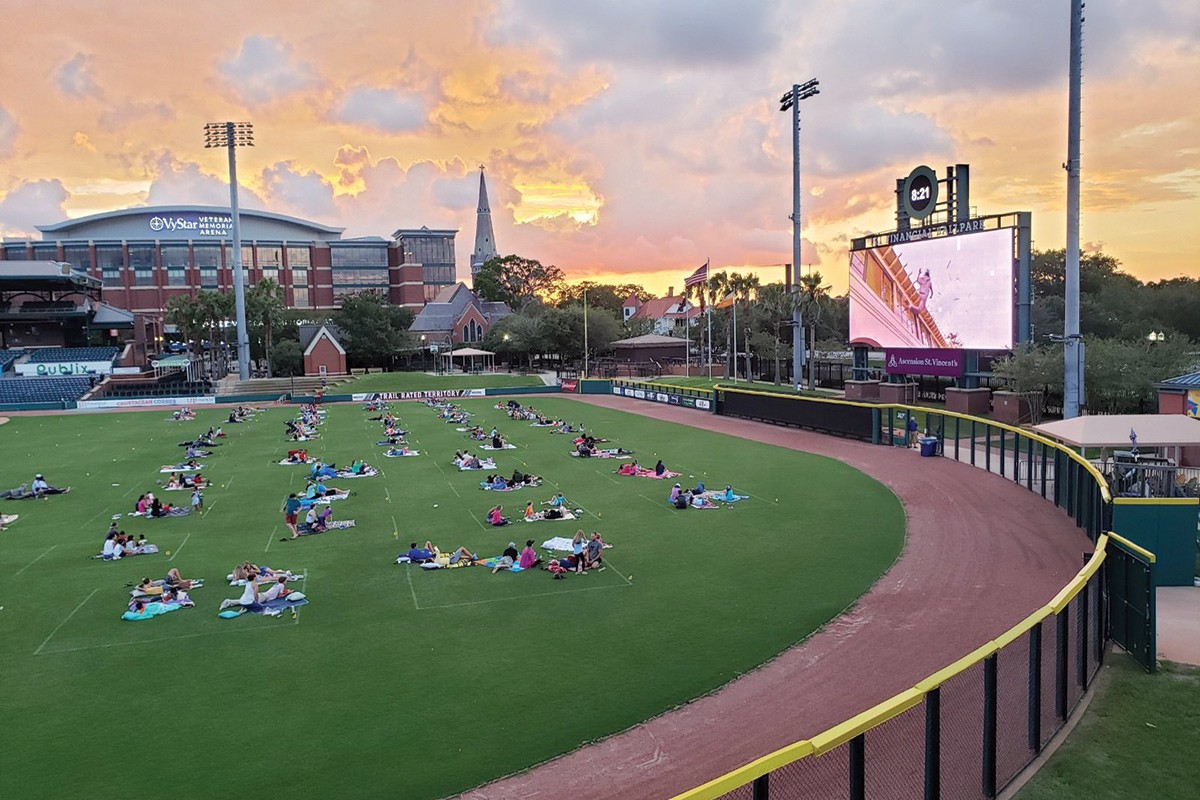 Movie night at the Jacksonville Jumbo Shrimp stadium. Minor League teams have had to get more creative in finding ways to generate revenue without fans in the seats. 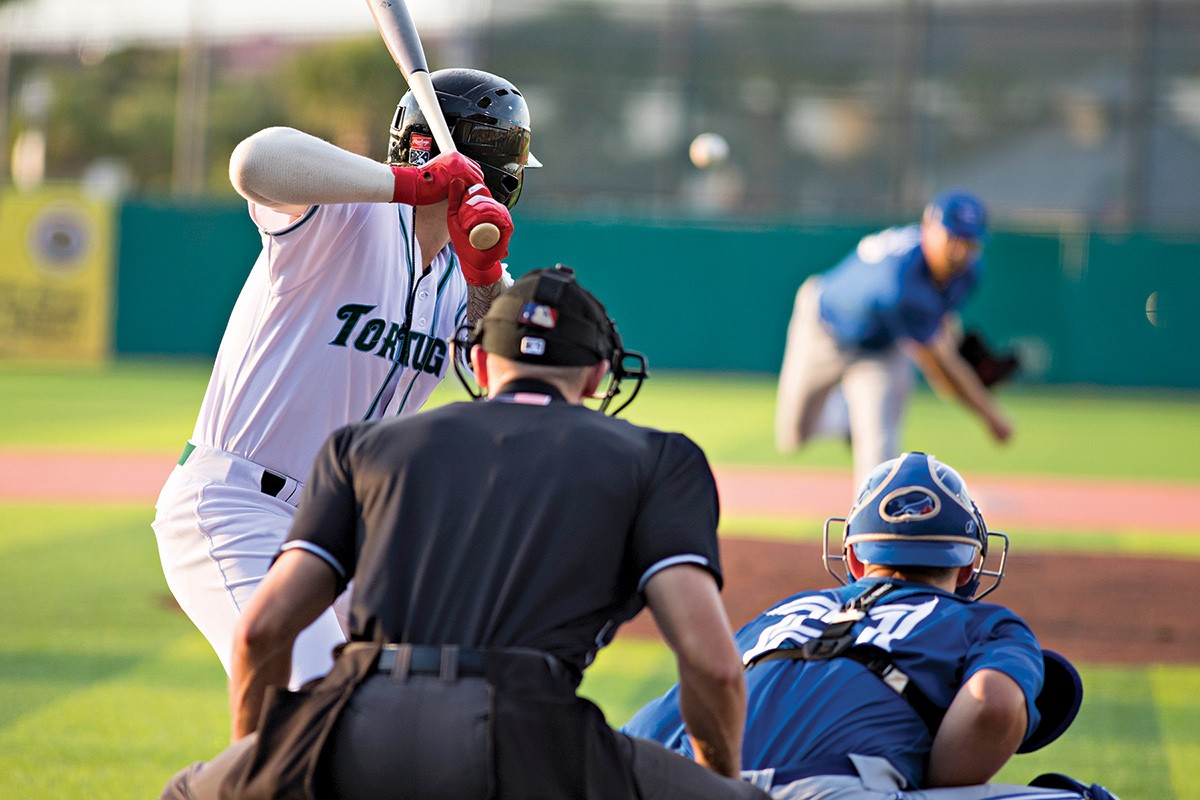 In 2019, the Daytona Tortugas set a team, dingle-season attendance record of 137,570 - averaging 2,116 per game, second-highest in the Florida State League. 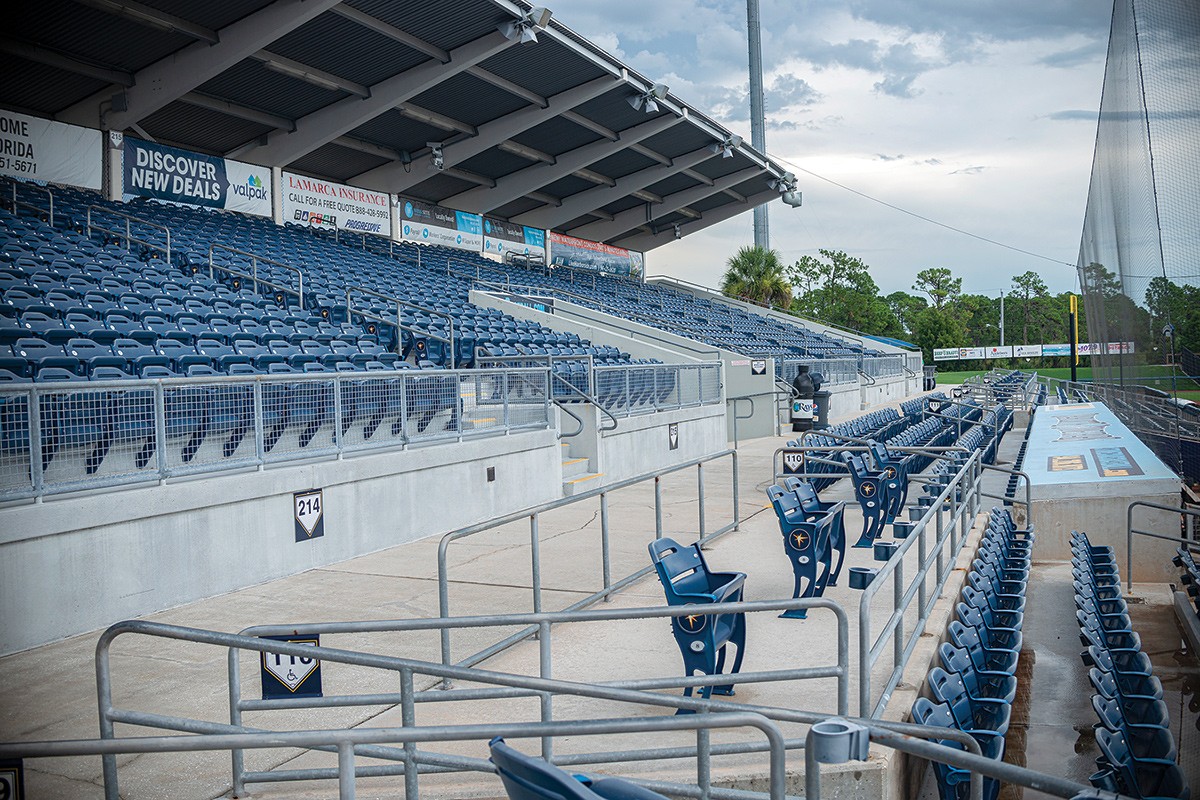 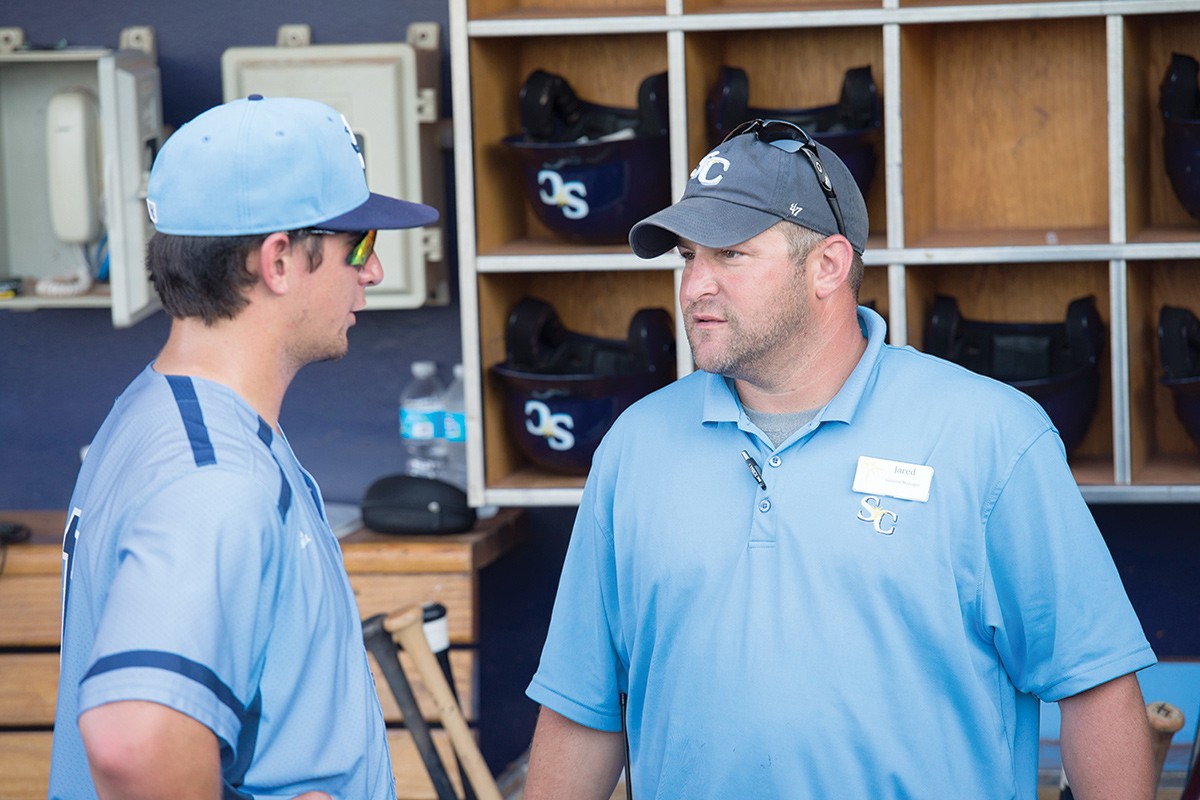 "We have unemployed people, a community without baseball. I understand they had a decision to make," says Jared Forma, Charlotte Stone Crabs. 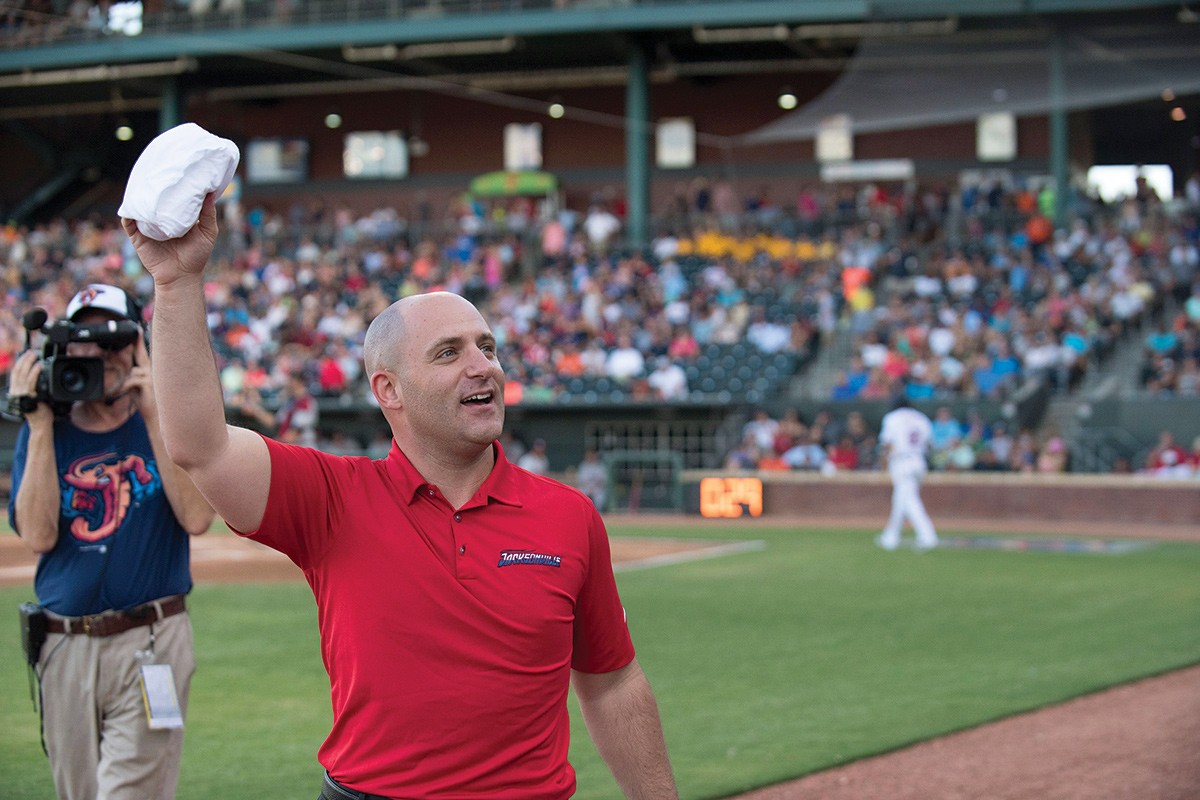 "I want to get back to welcoming a million fans between our two teams," says Ken Babby, owner, Jacksonville Jumbo Shrimp.

Minor League teams get creative with revenue in Florida

The Daytona Tortugas have delivered grand slams, extra innings and on-field thrills to their fans through the years. And like many Minor League teams, the Tortugas have used a host of creative promotions to put fans in the seats — everything from T-shirt and bobble-head giveaways to more offbeat promotions — “Star Wars nights,” for example. A Minor League team in Connecticut held a “mustache appreciation night.”

The promotions established some Minor League team owners as marketing whizzes and buttressed the teams’ finances. But in 2020, with the season canceled because of the pandemic, there were no games to promote. And the 2021 season — if it goes off — will start late. “We will have gone 19 months, maybe 20 months, without baseball revenue. There aren’t many businesses in the world that can go 19 months with no revenue,” says Bob Fregolle, co-owner of the Tortugas.

Fregolle, who is from Cincinnati, played the game himself into his 20s. He volunteered with his children’s teams. During international postings over a 35-year career with Procter & Gamble, he revived a league in Geneva, Switzerland, and started one in China. He wanted in on baseball after retiring from P&G in 2014.

A broker brought him to Reese Smith, founder of a Tennessee general contractor, and Rick French, founder of a North Carolina public relations firm. The three have owned the Tortugas, affiliated with the Cincinnati Reds, since 2015.

In the best of times, Minor League team ownership is an affair of the heart. The cancellation of the 2020 season cost the Tortugas “hundreds of thousands of dollars,” Fregolle says. Quint Studer, Pensacola executive and co-owner of that city’s Blue Wahoos team, says the Wahoos lost $3 million. Teams, including Daytona, tapped into the virus-relief Payroll Protection Program and Small Business Administration’s loan programs. But “the rest is on us” as owners to make up the shortfall, Fregolle says.

The Wahoos found some new revenue by listing the ballpark on Airbnb. For $1,571 a night, people could take over the ballpark and clubhouse for birthday or bachelor parties and father-son nights with guests running the bases to their heart’s content, shagging flies, taking batting practice and enjoying clubhouse life. It even sleeps 10 in two queens and four bunk beds. Thirty-two guests posted glowing reviews on Airbnb. As the Tortugas wait to learn the fate of the 2021 season, the team has hosted chicken sales — offering fans the chance to buy 40 pounds of chicken breasts for $53 — along with a $12-aticket YogaFest and a movie night featuring the movie 42, the Jackie Robinson biopic — fitting, as the team plays in Jackie Robinson Ballpark.

But as the teams scramble for revenue, they face another threat — Major League Baseball last year announced a restructuring of the minors in order to streamline the sport, improve facilities and travel for players and get rid of bloat in its talent development pipeline. Part of the plan involves cutting the number of affiliated teams to 120 from 160 — and the Tortugas were on MLB’s initial list of the 40 teams it wanted to jettison.

Losing affiliation would have been “just a tragedy,” Tortugas partner Rick French said at the time.

With the Tortugas’ historic facility showing its age, the city of Daytona Beach quickly pledged up to $4 million to upgrade the clubhouse, field lighting, batting cages and other features. It already had spent nearly $1 million on new artificial turf. Fregolle says the Tortugas owners made sure Major League Baseball knew “the ownership group is going to do what it takes” financially to get off the hit list. The Reds also went to bat for the team. “The Reds have been great to work with,” Fregolle says.

The team was spared. Others weren’t. A Tampa Bay Rays’ affiliate, the Charlotte Stone Crabs, was dropped. Purchased five years ago by a group called the Caribbean Baseball Initiative from Ripken Baseball, the team had been in the top third in attendance in the Florida State League and hadn’t been on the original cut list. Jared Forma, the club’s senior vice president and also senior vice president and general manager of the Wind Surge, the Wichita, Kansas, team also owned by Caribbean Baseball, says the group only had a couple of days warning before the ax fell. The team held a garage sale of Stone Crabs gear and closed shop. “We’re very disappointed. We have unemployed people, a community without baseball. I understand they had a decision to make,” Forma says.

The Florida Fire Frogs, a North Port affiliate of the Atlanta Braves, also was cut.

Teams that survived the cut must adjust to a new order. Pat O’Conner, who recently retired as Minor League Baseball CEO, says the agreement handed down by Major League Baseball is about “mostly control and money.” Among other things, it mandates higher standards for hotels and transportation during road trips that could be “onerous” for teams. While the agreement is sold as cutting costs and increasing income, “the consensus is it’s going to do exactly the opposite,” he says.

Minor League players, who are exempt from federal minimum wage law, make peanuts. Players in AAA make $14,000 in their five-month season and those in the lowest classifications make around $5,000. Minor League players get no pay in the off-season. The Major League minimum is more than a half million dollars.

In the minors, annual revenue runs from $5 million to $20 million with roughly 30% from the gate, another 30% from food and beverage, 30% from sponsorships, advertising and promotions and 10% from merchandise and non-baseball revenue. It’s that last category that owners hope to grow, whether by selling chicken, listing on Airbnb or other innovations. “Change is always difficult, but I think a lot of good can come out of this,” Fregolle says. The pandemic “has shown all of us there are other ways to create revenue,” he says.

Fregolle says he believes changes, including updates to the century-old Daytona ballpark, will have a good outcome. “It’s going to be good for our fans, and our sponsors and the charities we support,” he says.

With a new season in the offing, owners hope for the best: For a start in May, a lot of games and a return of fans. But none knows how many fans will turn out with the virus around and when revenue will return to pre-pandemic levels.

“The last 18 months have been difficult, but that’s business,” Fregolle says. “Overall, I still feel like I’m living the dream. My friends will tell you I haven’t stopped smiling since 2015.”

Prestige — at a Cost

As Ken Babby grew up amid the Baltimore Orioles — he was a ball boy in spring training, and his dad was the team’s general counsel — he noted and admired the work ethic of players like Cal Ripken and Chris Hoiles.

Babby’s own work ethic will get a workout this year. The team he purchased in 2015, the Jacksonville Jumbo Shrimp, is moving to AAA this season from AA. The higher designation likely makes the team more valuable and gives it more prestige. But it doesn’t mean more revenue — and it does mean higher costs. For one, he has to fly the team to all its away games rather than bus them as was true in AA.

As if adjusting to a new model wasn’t enough, there’s the little matter of the entire 2020 season lost to the pandemic. “It was a catastrophic financial hit to the company,” Babby says. “We’re really fortunate we went into the pandemic with very little debt.”

Babby, 41, has long loved baseball. But before chasing that dream, the Wheaton College double major in economics and computer science joined the Washington Post news company as an IT intern, eventually becoming general manager of its digital arm. In 2012, he bought the Akron, Ohio, Minor League team before adding Jacksonville for a reported $25 million. (Babby wouldn’t talk financials in an interview.)

Babby’s focus in the near term is this year’s recovery season. He expects not to return to pre-pandemic business levels until 2022. He says his teams will continue to be about affordable family fun. “You’re still going to come to the ballpark and have a $2 hot dog. You’re still going to have fireworks on Fridays and Saturdays. We’ll always have tickets that start at $5.”