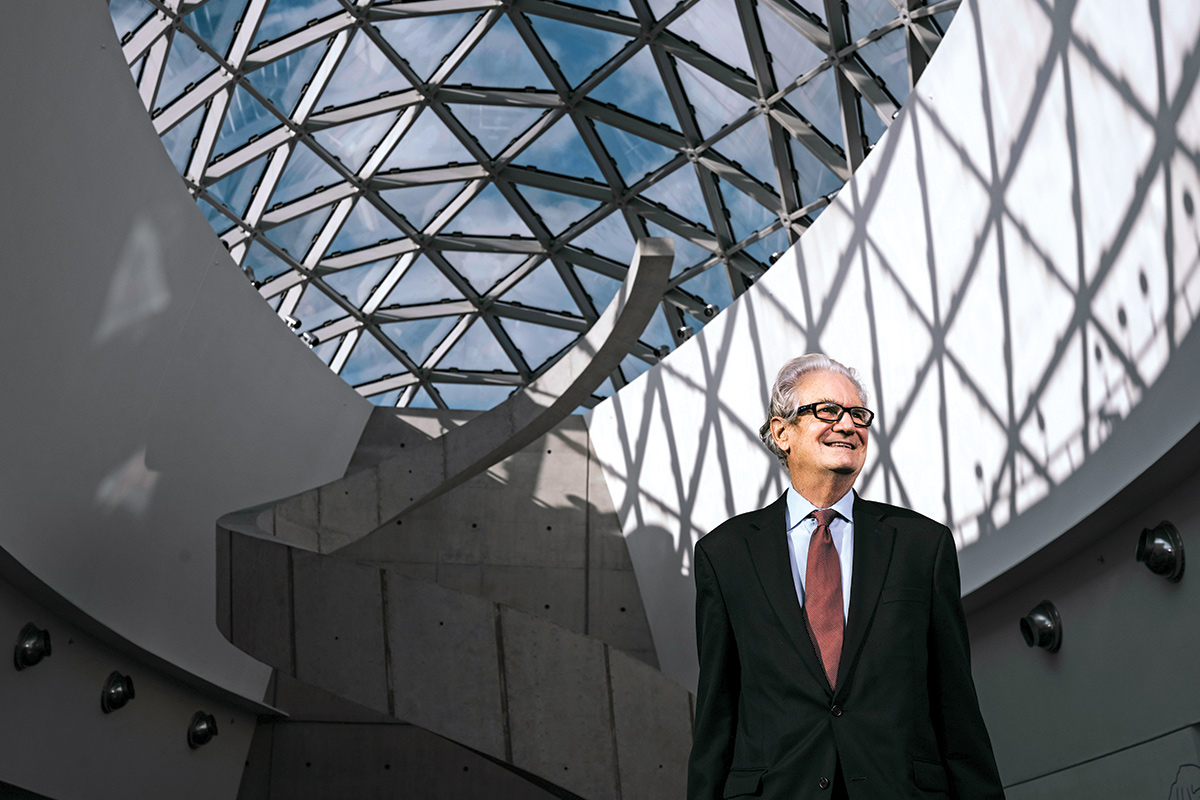 The strongest toolswe have as architects are our ears and our eraser.

My mother was French, my father American, so we children — and there were eight of us — grew up bilingual. My mother’s family home in Brittany became where we would often spend the summers. As well, we grew up all over, wherever my father, a U.S. Navy aviator, was stationed. I went to 12 different schools, all over the states, to finish the 12th grade before I went to college.

You can’t be an architect and have a template, I don’t think. You start by trying to understand. What is the client asking for? What does the building want to be? You get there by logic. You can’t pull it out of a drawer.

When I was in high school and in college, I would play the banjo or the guitar. I like to pretend that I helped Tina get into the guitar. (His sister, Tina Weymouth, an original member of the bands the Talking Heads and the Tom Tom Club, is a member of the Rock & Roll Hall of Fame.) But what I did with the guitar — Pete Seeger songs — was pretty rudimentary.

Sometimes, I’m asked about work-life balance, and I guess from one point of view my work-life balance is terrible. But, on the other hand, it’s not work if you love it. So I don’t think it’s fair to call me a workaholic.

I went to Harvard not knowing what I was going to do, but I was very influenced by my roommate’s father — James Lawrence, a very well-known, really terrific Boston architect. My freshman year, I decided to pursue architecture, but on Jim’s advice I didn’t major in architecture. He said you’re in a wonderful university, learn what you can of the arts, and you’ll learn the science and math later in architecture school. So I majored in modern European history. During my senior year, I cross-enrolled at MIT to deepen my understanding of engineering.

Florida is the spear point in this country facing global warming, climate change and sea-level rise. We’re human beings. We’ve evolved wanting to be close to water because water is life. But it’s important that we begin to recognize that this is risky. Our building codes are beginning to adapt to this, but very slowly.

My father died at 102. He was a remarkable man — a long Navy career, fought in three of our wars, fought in the Pacific at Guadalcanal and all those battles, flying a dive bomber. Then in 1950, when the Korean War broke out, he led an air group and, much later, he was in charge of a carrier as an admiral during the Vietnam War. He was a stern father. He could be very warm, but he was also very strict. He taught me to sail, which was marvelous.

My first job after graduating from the MIT School of Architecture was at I.M. Pei & Partners. I.M. Pei became a mentor and a friend. I would watch his deep research into each project and his passion to analyze and to go for quality down to the last detail. I was inspired by his extraordinary humanity, his exquisite politeness and his ability to listen. When I worked for him as chief designer for the National Gallery of Art East Wing in Washington, D.C., and then again on the Grand Louvre Project in Paris, watching him work, seeing how he thought, those memories are still very fresh. What was wonderful about I.M., and I think this is true for being a really good architect, is to learn how to be very analytical and, in your conscious mind, figure things out, but then also listen to your intuition.

Sailing is physics. When you sail, you intuitively learn about triangulation. You learn about fluid dynamics. You learn about what works and what doesn’t work. Louis Sullivan said, ‘form follows function,’ and it’s true. Things are beautiful when they perform beautifully.

Every time you get a new tool, you keep the old tools. Computer-aided design, what’s called CAD, is a marvelous thing. I design all the time now in 3-D, virtually, so that we can go into our buildings. It also allows us to communicate the buildings better to our clients and to each other. Originally, when CAD design first came in, people were worried that it was going to turn all buildings into grids, but as you can see, it has not done that. You look at the Dali Museum. Part of it is a grid and part of it is like a very natural living thing, and that’s what CAD has helped on. But we haven’t lost the old tools. I’m sitting at my desk right now, and I have a box of colored pencils on one side, a box of ink pens and pencils on the other. And my project notebooks are covered with sketches and writing and scribbling and diagrams.

I love how international Florida is. When you walk down a Miami or a St. Pete street, you hear different languages, just like you do in London or Paris or Hong Kong. I love that.

The feeling you have when you’re walking through a forest or walking down the beach — buildings can do that, too. The James Museum of Western & Wildlife Art brings back memories of walking in an Idaho canyon or walking down a ravine in Nevada. You stand in the Dali Museum on the balcony watching people come in the door and their kids start running around in the most wonderful way because they’re so excited, and the parents are looking up at the stairs or the skylight or the glass and concrete, and it’s a good feeling. That’s the most rewarding part for an architect — seeing that you’ve communicated through a spatial experience something that gives pleasure.