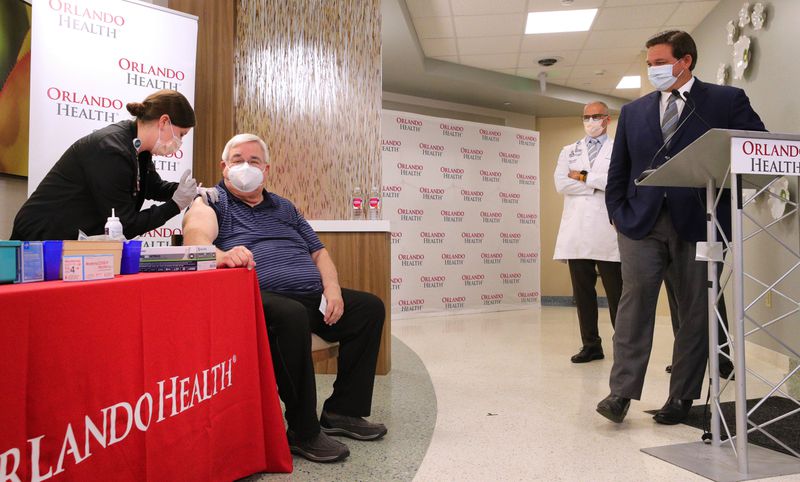 Florida Gov. Ron DeSantis announced a series of steps Monday to speed COVID vaccinations, after a week in which seniors ran into bureaucratic and technical walls as they tried to get the life-saving injections. The state will convert selected COVID test sites to vaccination sites, use houses of worship in underserved communities as vaccination sites, activate contracts for an additional 1,000 nurses and send Emergency Response team members into long-term care facilities. The governor also increased the pressure on hospitals, saying those that don’t administer vaccines quickly won’t get future doses. More from the South Florida Sun-Sentinel, the Tampa Bay Times, and the Orlando Sentinel.

Florida hospitalizations to continue to climb

The number of new coronavirus cases in Florida was moderate over the weekend, with numbers expected to rise after risky holiday gatherings. According to the Florida Agency for Health Care Administration, hospitalizations continued to climb through the weekend with nearly 76,944 patients reported on Sunday. [Source: CBS 12]

How Walmart plans to take over health care

Walmart, the world's largest retailer, wants to be your doctor, too. As consumers face skyrocketing healthcare costs, Walmart, along with rivals CVS Health and Walgreens, is diving deeper into the healthcare business, opening in-store clinics in an attempt to grab a slice of the $3.6 trillion Americans spend annually on healthcare. [Source: NBC Miami]

In less than three months, the Florida Legislature will convene to pass new policies and set priorities for the state budget. Childcare experts are hoping a new report on the pandemic's impact on children will help guide their decisions. The latest Kids Count report - Kids, Families and COVID-19: Pandemic Pain Points and the Urgent Need to Respond - said Florida’s families are struggling at higher percentages than families nationwide when it comes to food security, housing stability, and affordable health care. [Source: WUSF]

The new year will bring more transparency in hospital prices

A new federal health care rule will require hospitals to publicly post prices for every service they offer and break down those prices by component and procedure. The idea behind the Transparency in Coverage rule is to let patients choose where to go, with price taking into consideration. [Source: Health News Florida]

› 'That love and bond lifts me up': Visit from her horse inspires Mayo Clinic patient in Jacksonville [Florida Times-Union]
A week before Christmas, Anissa Cottongim was hospitalized in Jacksonville's Mayo Clinic. The rare form of cancer the 51-year-old Ocala woman had been battling for a year had worsened. But on Dec. 18, she was treated to an excursion outside in the sunshine. And she was stunned to see a horse grazing on the Mayo campus. A closer look revealed it was not just any horse, but her horse, a 14-year-old German Trakehner stallion named Tatendrang.

› Medical practice plans 88,000-square-foot headquarters project [Business Observer]
A Manatee County orthopedic practice recently announced plans to build a new headquarters and medical facility — in what could be one of the largest construction projects of 2021 in the Bradenton area. The project, for Coastal Orthopedics, calls for an 88,000-square-foot facility on a 17-acre parcel on State Road 64, just east of Interstate 75.

› North Florida Regional Medical Center officials ask people to leave up Christmas lights [WCJB]
If you’re late pulling down you Christmas lights, there’s a good reason to keep them up. North Florida Regional Medical Center officials are asking for people to leave up their lights until the end of January. According to hospital workers, it’s a way to show support for health care workers during the pandemic.