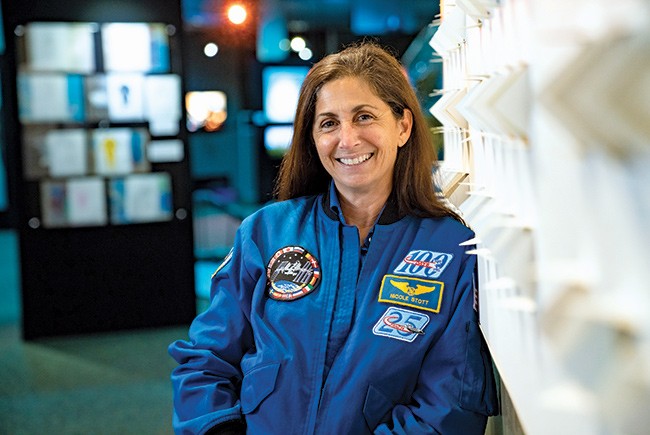 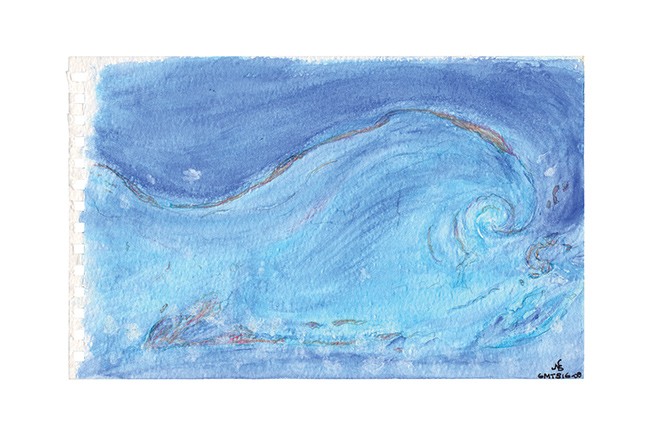 Stott's painting of Earth, as she saw it from space, is one display at the Smithsonian Air and Space Museum in Washington, D.C. A print is also on exhibit at MOSI in Tampa through 2020.
< >

The difficult thing about becoming an astronaut was convincing myself that I should even apply.

Most of our weekends were spent hanging out at the Clearwater Executive Airport, where my dad built and flew small airplanes. It was hugely influential on me, even though I didn’t really know it at the time. As I got older, I realized I really did like flying.

I think when tourists come to Florida, the first stop should be the Kennedy Space Center — and then they can go to the Orlando sites. See the reality first and then go where you can imagine other things.

My dad was killed in a small airplane crash the week before my 16th birthday. I think what it did is it kind of reinforced my desire to understand how things fly. At the time, I felt completely baffled. How can this person who loved to fly and who flew really well — how can this happen? It was devastating, honestly, but it didn’t scare me from flying. I think about my mom, and I’m in awe of her strength. Her husband is killed in an airplane crash and then her daughter wants to get a pilot’s license and study aeronautical engineering.

My son was 7 when I flew to space the first time, and so his whole young life was me preparing in one way or another to go to space. He understood what I was doing and why I was doing it, and I think he felt like he was part of it.

Looking at Earth from space, you realize that the only border that matters is that thin blue line of Earth’s atmosphere.

I would argue that we’ve pushed ourselves so far to this idea that everything has to be STEM at the expense of social studies, the arts and the cultural stuff that goes along with school, too. I always think about it as teaching our kids in more of a Renaissance way, that students need a well-rounded education. I want my son using his whole brain.

I like to get out in the yard — gardening, weeding, trimming, all of it. It’s cathartic for me.

Being in space is having to manage those thoughts of just how incredibly overwhelmingly beautiful our planet looks and yet knowing that it’s not always that pretty on the surface. The conundrum is, ‘OK, how do you take this experience and present it in a way that allows other people to appreciate it like that, so that we can really take action to solve the problems on Earth.’

I will not downplay the adventure of flying in space. I highly recommend it, but in the end, I would not have strapped on to 7 million pounds of exploding rocket thrust with a 7-yearold at home if I didn’t think what I was about to go do was going to be worthwhile for him and a lot of other people. There’s got to be a greater good in it.

We’re not just working on the Space Station. We’re living there, so we have to have these human things there with us. I brought up a little watercolor kit. First, you have to get everything organized because, if you don’t, everything will just float away. I used a drink bag, which has a little straw on the end, to squirt out some water and, if you do it slow enough, the water comes out in little balls that float. Then, you take the brush and, just before physically touching the ball of water, it’s like the water wants to move onto the end of the brush. And then you take this ball of water down to the paint, to get the color, and, right before getting it there, the water wants to move to the paint and then back to the brush as colored water. Then, it was a matter of painting. I wouldn’t say it’s painting like we do down here, where the brush actually touches the paper, because if it did all of the colored water wanted to get sucked into the paper at one time, so I discovered that the way to paint was really just kind of getting to that point where the ball of water is just touching the paper and then dragging it along the paper instead of touching the brush to it. It was really fun.

The majority of the training we do, whether it’s learning about a system on the space shuttle or the space station or learning how to do a spacewalk is embedded in some way with — how do you work as a team? How do you understand what kind of leader you are, but, maybe more importantly, what kind of follower you are?

Women have to be present for each other. For young girls to be interested and think they can do these kinds of things, we have to be visually present for them so that they can see it as possible. Girls need to see women as examples.

Spiritual is a good word to use in describing being in space. I was feeling connected to things in a way I hadn’t before. I was experiencing the universe in a new way.

I think about my home now as planet Earth, but Florida is a special place on the planet. My heart is here.