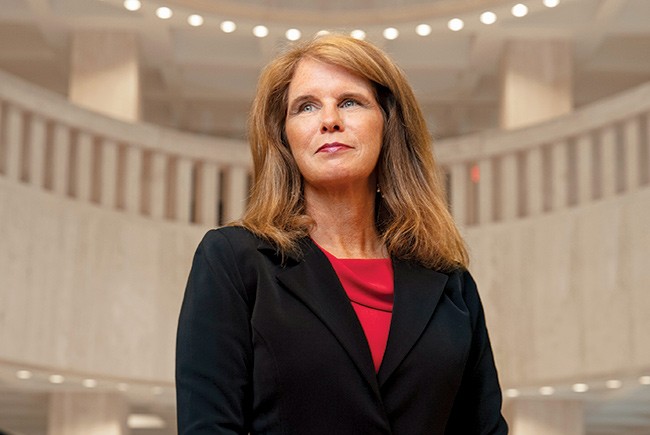 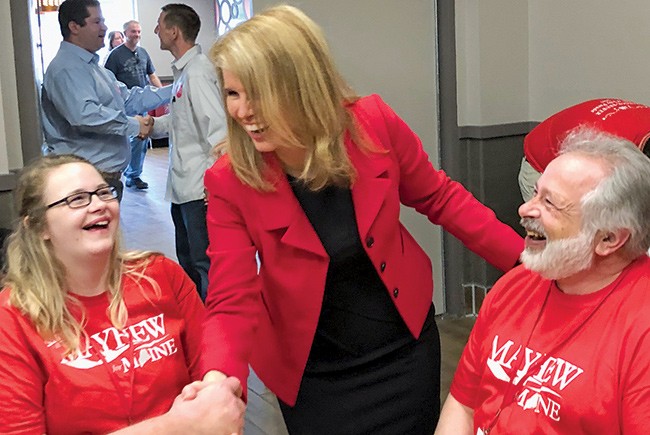 Mayhew ran for governor of Maine in 2018. 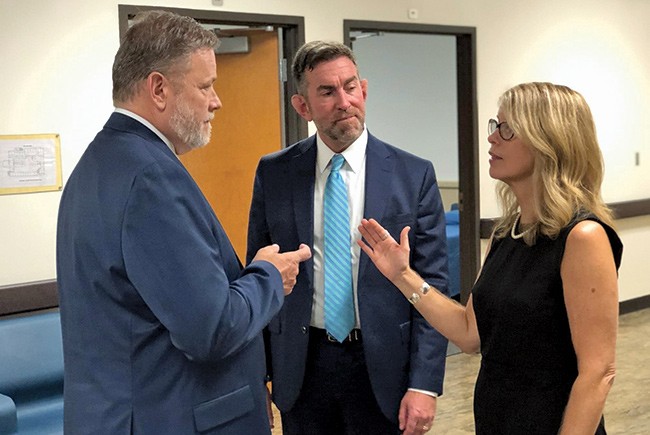 During her time at the Agency for Health Care Administration, Mayhew earned a reputation as being hardworking and blunt.
< >

A Focus on the Core Mission

‘You don't make good decisions if you're constantly in crisis mode.'

Last spring, Mary Mayhew, then head of the state Agency for Health Care Administration, which oversees the state’s hospitals and nursing homes, faced a dilemma: What to do about nursing home residents who had been hospitalized with the coronavirus but did not need hospital-level care? As the pandemic spread across Florida, hospitals worried about the potential for being overwhelmed with patients and running out of beds.

In New York, state health officials had tried to reduce hospital crowding by requiring nursing homes to take back residents with non-critical cases of COVID-19. Some suggested that Florida do the same, but the state’s nursing home industry pushed back, warning that it could lead to massive viral spread among vulnerable elderly residents.

During a meeting with Mayhew at her Tallahassee office, Emmett Reed, a lobbyist for the state’s nursing home industry, warned against returning coronavirus patients to facilities that were unequipped to isolate and care for them.

Mayhew “very quickly understood what a huge mistake that would be,” says Reed, executive director of the Florida Health Care Association, the state’s largest lobbying group for elder care facilities.

“We felt very strongly about how best to protect our elderly, and, yes, I was constantly asked by hospitals in those early months about the need to discharge and why aren’t nursing homes taking these patients back,” Mayhew says. “I stood my ground and said, ‘No, you are not going to discharge.’ And we never wavered from that.”

Reed credits Mayhew with saving thousands of lives as a result. "You can look at New York and understand Florida made the right decision," he says. "It would have been a nightmare for the long-term care community."

Mayhew, 55, grew up in Pittsfield, Maine, a small town near Bangor. Her mother was a nurse’s aide; her father worked as a factory foreman and chaired the local school board. He instilled in Mayhew an early interest in politics. “We talked a lot, and he would debate with me,” she says. “We say ‘politics,’ but really, I was just interested in understanding our democracy and how government works.”

When she was 14, the family moved to Paragould, Ark., to be near her mother’s aging parents. Mayhew decided to spend her senior year in high school as a congressional page in Washington, D.C. At the start of the school year, she showed up for work — a month early — at the Capitol Hill office of then-Democratic Congressman Bill Alexander. His staff told her to come back in a month.

With room and board to pay for, she called her father in a panic. “I remember him in his most sarcastic voice saying to me, ‘Do you want daddy to come and fix this for you?’ ” she recalls. “I slammed the phone down and marched back up to Capitol Hill and said, ‘You need to hire me now so I can pay my rent.’”

She says she considers her father an “incredible mentor” and was devastated two years later when he died during her sophomore year in college. “It was very, very hard. We were incredibly close,” she says.

After graduating from the University of Arkansas and working as a corporate lobbyist in Atlanta, Mayhew moved back to Maine to run a Democratic congressional campaign for Pittsfield native Patrick McGowan, a family friend. McGowan narrowly lost the election to then-Republican U.S. Rep. Olympia Snowe.

Mayhew spent the next two decades lobbying in Maine, including 11 years as chief lobbyist for the state hospital association. In 2011, she joined the administration of then-Gov. Paul LePage, a Republican, who appointed her to lead the Maine Department of Health and Human Services.

The agency, which oversees the state’s Medicaid and welfare programs, as well as public health and child protective services, had been running up deficits for years. LePage “gave me less than 24 hours” to accept the job, she says. “Honestly, I’m grateful in hindsight that he didn’t give me any longer. I’m not sure if I’d been given more time to think about it that I would’ve said yes.”

Under Mayhew, the agency slashed Medicaid and welfare rolls by imposing new time limits and work requirements on beneficiaries. The cuts made her a target of Democratic opponents, who criticized her as antagonistic toward Medicaid and other safety net programs.

Mayhew, a mother of two adult sons, says she learned early in her government career to not lead by reacting — and to grow a thick skin.

“You don’t make good decisions if you’re constantly in crisis mode. You’ve got to balance the fires of the day — and there are always fires of the day — with proactive strategies and goals,” she says. “In government, you can’t be all things to all people. The challenge is always, how do you achieve your core mission?”

In 2017, Mayhew stepped down as health commissioner to prepare for a run as Maine governor. LePage, who was unable to seek re-election due to term limits, praised Mayhew for restoring fiscal health to the agency and standing firm against “constant criticism.”

She campaigned as a small-government Republican but finished third in a crowded Republican primary field. “I was crushed,” she says, referring to her 15% share of the vote total. “I was obviously disappointed, but that’s life — another great lesson for my kids. You’ve got to be resilient.” The Democratic nominee, Janet Mills, a former Maine attorney general, ultimately won the general election.

Mayhew then joined the Trump administration as head of Medicaid, a job she held for only a few months. In early 2019, DeSantis appointed her secretary of the Agency for Health Care Administration (AHCA), which, in addition to regulating hospitals and nursing homes, administers the state’s $29-billion Medicaid program.

Tarren Bragdon, a former Maine legislator who has known Mayhew for more than a decade, says he encouraged her to take the job in Tallahassee.

“There’s a big difference between working at the federal level and working at the state level,” says Bragdon, founder and CEO of Naples-based Foundation for Government Accountability, a conservative think tank focused on welfare and health care reform. “If you’re somebody who likes to directly impact people’s lives and is action-oriented and wants to get things done quickly, then operating within a state is what you want to do. I think Mary discovered that.”

During her nomination process, Florida Democrats scrutinized Mayhew’s tenure as the top health administrator in Maine, pointing to a 2017 audit that found her former agency had broken federal rules by not timely investigating the deaths of 133 Medicaid beneficiaries with developmental disabilities. State Sen. Kevin Rader, D-Delray Beach, suggested that Florida find a Medicaid director “who doesn’t have a background of actually breaking federal and state requirements.”

Mayhew noted that Maine’s attorney general had reviewed the deaths and found none caused by abuse or neglect. “Government is not perfect. I’m not perfect,” she told a Senate budget panel. “But what you get from me as a leader is one who will continually be focused on who we serve, how we serve them and whether we are serving effectively. I will ask questions every single day.”

Mayhew also addressed her stance against Medicaid expansion under federal health care reform. “Did I oppose Medicaid expansion in Maine? Yes,” she said. “Maine expanded long before the Affordable Care Act, and we were hemorrhaging red ink.”

The Senate ultimately voted 26-13 in favor of Mayhew’s nomination. She has since developed a reputation as accessible, hardworking and blunt. “Mary is very direct. I like that,” says Carlos Migoya, president and CEO of Miami-based Jackson Health System.

In May, Migoya worked with Mayhew to turn an old rehabilitation hospital in Miami into a COVID-only treatment facility. “I think we talked on a Tuesday, and by the following Tuesday or Wednesday, we were licensed and ready to go. It was that fast,” Migoya says. “She didn’t take any shortcuts. She basically had people expedite the inspections and do everything that needed to be done. Everybody just moved quickly.”

“We prepared for somebody who was going to be political and partisan, and that’s not what we’ve seen at all,” Johnson says. “She’s been good to work with. She has sought our input and listened to what we have to say and done a number of things right.”

In August, Mayhew found herself amid another controversy when AHCA awarded a contract for upgrading its Medicaid data system to Deloitte Consulting — the company that built the state’s troubled unemployment benefits website. Two competitors, IBM and Accenture, protested AHCA’s selection.

Several weeks later, DeSantis announced that Mayhew would be stepping down as AHCA secretary to lead the Florida Hospital Association, the states main lobbying group for hospitals. In a statement, DeSantis said Mayhew had “served Floridians well, and we wish her all the best on her new endeavor.”

Mayhew says she’s proud of her handling of the coronavirus crisis and dismisses suggestions in the media that she was pushed out over the contract controversy. “That had nothing at all to do with this. This is simply an incredible opportunity that I’m excited about,” she says, adding that she was approached about the job and “absolutely” had not been looking.

As chief lobbyist for Florida hospitals, Mayhew says she'll continue some of the work she did at AHCA to support regulation aimed at improving care quality and access, especially for people with chronic diseases like diabetes, drug and alcohol addictions and mental illness.

“Oftentimes, there are not the warm handoffs from the primary care physician to the specialist to diagnostic imaging, which can contribute to poor health outcomes. Individuals end up in the emergency room or hospitalized for something that could have been managed more effectively,” she says. “Hospitals have a real opportunity to drive expectations and support some of the services that reduce fragmented health care delivery.”

“One of the things I tell my sons is, ‘you never know the path that you’re going to be on. It’s not a straight line,’ ” she says. “Sometimes, you just need to be open.”