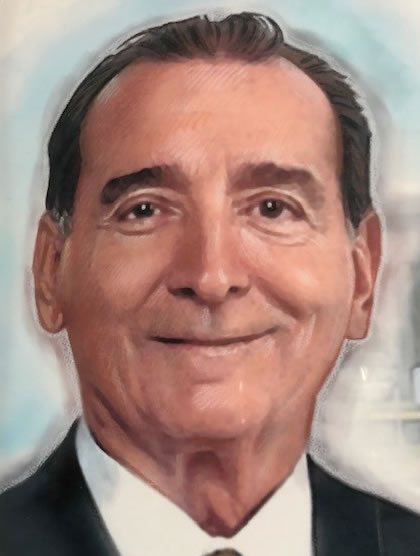 Manuel “Manolo” Villamanan, who capped a four-decades long career in the auto-industry, died on October 12. He was 85 years old.  Mr. Villamanan was the Co-Founder and President of Midway Ford, and ultimately became the CEO of South Motors and Vista Motors in South Florida. He is survived by his wife of 57 years, Carmen Villamanan, his sons Alexander "Alex" and Manuel “Manny” (and his wife Mariaelena), and his granddaughters, Gabriella Victoria “Gavivi” and Sofia.

Mr. Villamanan began his auto-industry career at Anthony Abraham Chevorlet, where he worked for 14 years and met his future business partner, Charles Dascal—fittingly, when selling him a car. The two joined forces to found Midway Ford; and under their leadership, the dealership grew to become one of the largest Ford stores in the country. Upon his joining the South Motors and Vista groups as President & CEO years later, Vista became the number one BMW dealer in the country for eight years, and the companies won multiple national accolades for the various brands they represent. Manolo was an early adopter of the importance of “Location, location, location,” and remained deeply invested in mentorship and developing talent. He proudly served at the helm of these companies for 20+ years.

“I truly would not be where I am today without the mentorship and friendship of Manolo,” said Jonathan Chariff, the current President & CEO of South Motors. “Manolo was absolutely the best kind of leader. He cared about people, all of us, and took the extra time out of his day to ask how we were doing and to teach us about the business as he was running it in real time. That always meant so much to me. I feel incredibly lucky to have had him as my dear friend and mentor for the past 45 years, and I will miss him dearly.”

Manolo was an active participant in the auto-industry at large, serving as the Chairman of the South Florida Ford Association and on the Board of the Florida Department of Motor Vehicles. Known affectionately as the Car Man, he was an innovator of the industry, the first to advertise on city buses and a known benefactor of the Cuban community, of which he was so honored to be a part.

A native of Havana, Cuba, Mr. Villamanan was dedicated to fighting for Cuba and fostering Cuban community in South Florida.

“Manuel (Manolo) Villamanan was an extraordinary man that continued fighting to the end for the freedom of his beloved Cuba and against international communism. He actively participated in various organizations like La Asociacion de Veteranos De Misiones Especiales and contributed to many others to support internal opposition in Cuba. In connection with his stellar business career Manolo established important foreign policy relationships with senior officials in the Department of State in Washington D.C. His keen understanding on Latin America political affairs and lines of communications into several key countries made him a frequent unofficial advisor. His invaluable contacts in Washington helped shape US policy,”said Herminio San Roman, the director of the Miami-based Office of Cuba Broadcasting (OCB).

Manolo loved Miami and spending time enjoying it with his family and friends. He was a member of the Big 5 and Ocean Reef Clubs, adored his boat, and relished his time exercising and remaining active. He could often be found hitting a killer serve to Mr. Dascal and Larry J. Hoffman, Co-Founder of Greenberg Trauring, on the racquetball court. He was an active philanthropist, donating his time and resources to The American Cancer Society, Jackson Memorial, La Liga Contra El Cancer, Centro Mater, and St. Jude’s Children’s Hospital. He was an extremely passionate patron of The La Salle Education Center, a Catholic Community Center serving low income and agricultural families in the South Dade Community.

“Manuel, or Manolo as I called him, was a close friend and one of the most influential mentors I have ever had. My day always started with a call from him at 7 a.m. asking me about work and how I could improve my business – he was always trying to motivate me. He was a humble and quiet man whose accomplishments spoke volumes,” said Tony Argiz, Chairman and CEO of Morrison, Brown, Argiz & Farra.  “From the first day he opened Midway Ford with Carlos Dascal the dealership was always profitable, and he turned it into one of the top Ford dealerships in the country due to his leadership skills and how he kept a close eye on the bottom line. He was one of the greatest dealership operators I have ever worked with, and he taught me so much about the industry because he knew how to run a business consistently during up and down periods. The only thing he loved more than his business was his family, and we will all miss him immensely.”

"The greatest gift my father left us was that of his example," Alexander Villamanan added. "He was the die-hard patriot and the hardest working businessman—and he did everything he did for his family. We will miss him."

About South Motors
South Motors, along with its affiliates Vista Motors and Midway Ford Miami, is a privately-held new and used car dealership headquartered in Miami, Florida. Since 1956, this institution has grown to become one of the nation’s first minority-owned franchises, with dealerships across South Florida, including BMW, MINI, Honda, Volkswagen, Infiniti and Ford. South Motors proudly offers Automotive Service seven days a week. Recently named one of South Florida Business Journal’s Healthiest Employers, South Motors is passionate about promoting a positive company culture and corporate wellness for all 1,200 of its employees, as well as serving the greater Miami Dade County community. South Motors is committed to giving back to the South Florida community and is heavily involved with many charitable organizations, including the Miami Book Fair, St. Jude Children’s Research Hospital, Amigos for Kids, Cystic Fibrosis Foundation, American Diabetes Association, Susan G. Komen, Feeding America, hurricane relief groups and many others. For more information, please visit www.southmotors.com.