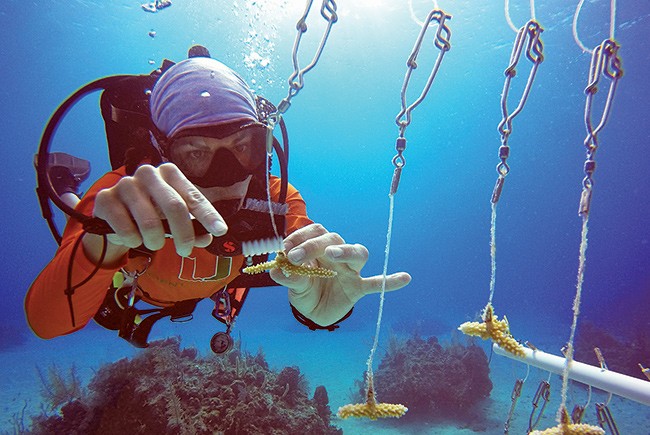 The newly planted coral will come from UM and Nova nurseries, the Florida Aquarium and Secore International, a reef conservation group. 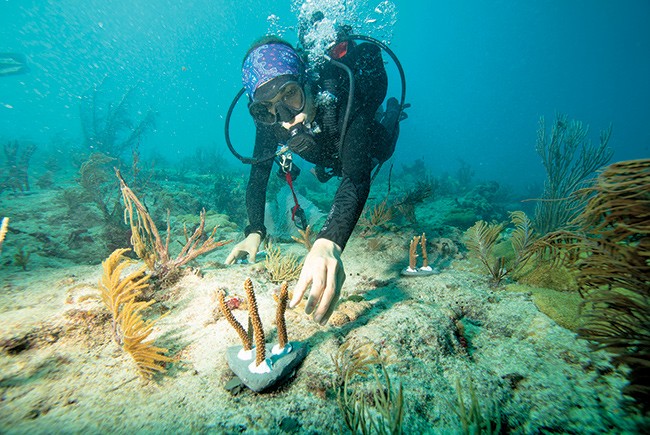 "It's time to buy these approaches now to help us buy time for reefs as oceans continue to warm over the coming decades," says Baker.

Such rebuilding has been done before off Miami-Dade and the Keys but this latest effort, while expanding the restoration footprint, “also brings together the cutting-edge restoration science being done by our collaborators” on raising corals to withstand stresses, enhance genetic diversity and other science endeavors, says UM professor Diego Lirman. “This work has been done both in the Keys and Miami before but not organized like this with so many partners as part of a coordinated effort,” Lirman says.

Florida reefs have taken a beating from storms, diseases, heat, pollution and water over- or under-saturated with nutrients. With a $3-million grant from the National Fish and Wildlife Foundation matched by UM, local, state and corporate partners, Lirman and three other UM researchers — Andrew Baker and Brian Haus from the Rosenstiel School of Marine and Atmospheric Science and College of Engineering assistant professor Landolf Rhode-Barbarigos — plan to spend three years growing and planting five species of coral in the larvae, juvenile and adult stages.

The overall work includes techniques developed by Nova’s Brian Walker in which he covered coral with a protective substance and injected them with antibiotics to stop the spread of disease. The newly planted coral will come from UM and Nova nurseries, the Florida Aquarium and Secore International, a reef conservation group.