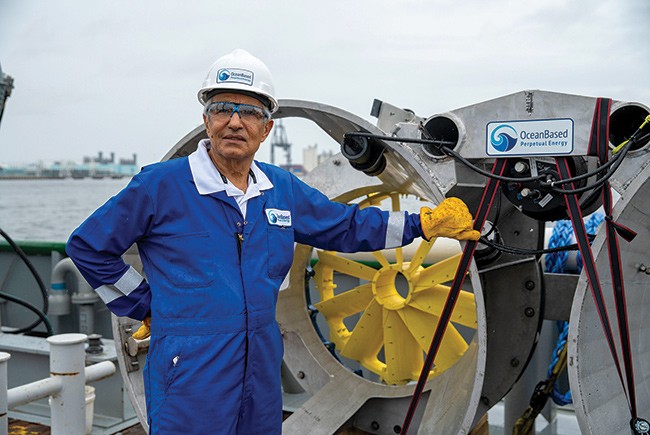 Nasser Alshemaimry came to FAU with his Gulf Stream plan. 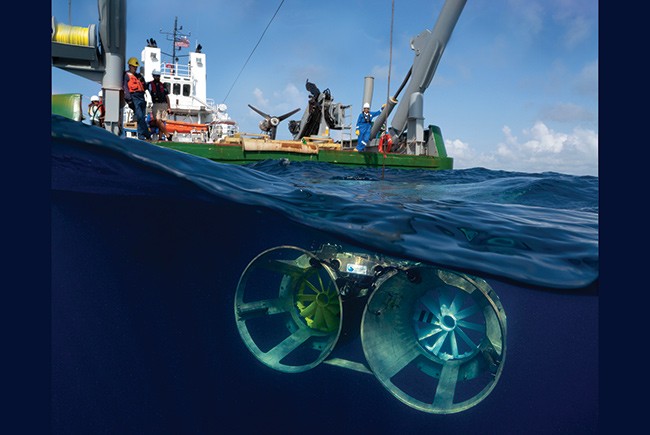 Nasser M.N. Alshemaimry, an investor and entrepreneur who built a solar-powered housing community in a desert and was an Ernst & Young Entrepreneur of the Year, was at a conference in Scotland in 2018 talking about his desire to tap the Gulf Stream to generate electricity — “the Holy Grail of perpetual energy.” A federal Energy Department official told him to head to Florida Atlantic University and its Southeast National Marine Renewable Energy Center. The center is one of three Energy Department-designated test centers that work with companies on marine renewables, including generating power from ocean energy.

Alshemaimry came to FAU with his Gulf Stream plan shortly after the Scotland conference and in May reached a milestone. His Oceanbased Perpetual Energy demonstrated that three types of turbines submerged in the Gulf Stream current 20 miles offshore between Broward and Palm Beach counties could be turned using only the power of the water current. One of these turbines was used to successfully generate power for 24 hours solely from the Gulf Stream, which typically flows there at 2 to 5½ miles per hour. It was said to be the first time that energy had been harnessed from the Gulf Stream for 24 continuous hours.

Alshemaimry looked at solar and wind and didn’t like either because of their limited generating time. For his Gulf Stream project, his next step is to get approvals to install seabed-anchored infrastructure from which specially configured underwater turbines generate power and send it by cable to seabed substations and then transmit it to land substations. It’s deploying sonar testing this year to find the optimal spot in the current for velocity and also is getting into the heavy design challenge of making full-scale turbines for the conditions. It has hired Canada-based WSP as project manager and consultant for stakeholders outreach.

A question on the future of marine renewables is making equipment that can last in the saltwater environment. Alshemaimry says humans have had equipment on the seafloor since the first telegraph cable across the Atlantic was laid in the 1850s. “We’re not reinventing the wheel here,” he says.