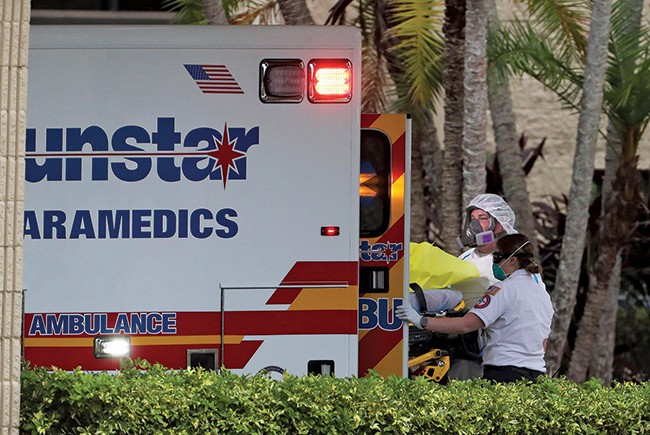 Approximately 3,000 residents of long-term care facilities have died from the virus - about 42% of all COVID deaths in the state. 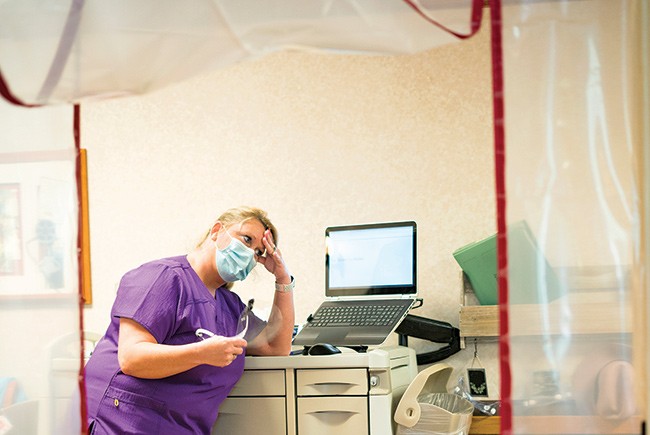 The costs of the pandemic are weighing on the industry. Besides the added expense of equipment and other safety precautions, labor costs are also rising. 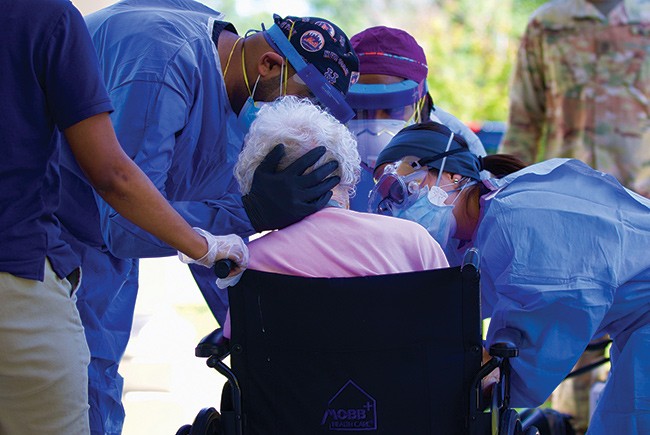 Shortage of equipment, testing delays and confusion over how the virus spreads have created a nightmarish scenario for facilities that were never intended to operate like hospitals. 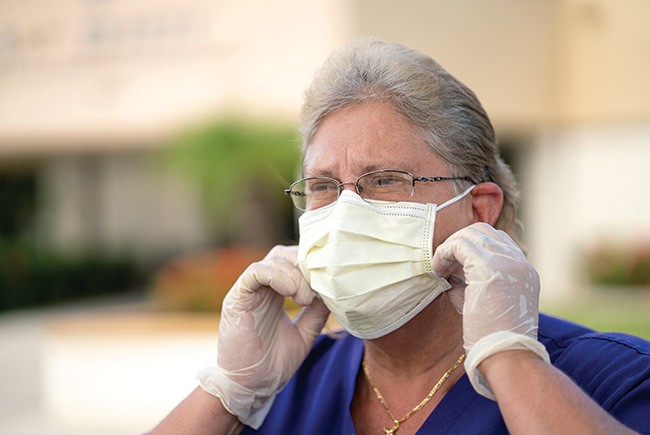 "We're not getting a lot of full-time people now," says caregiver Amy Runkle. 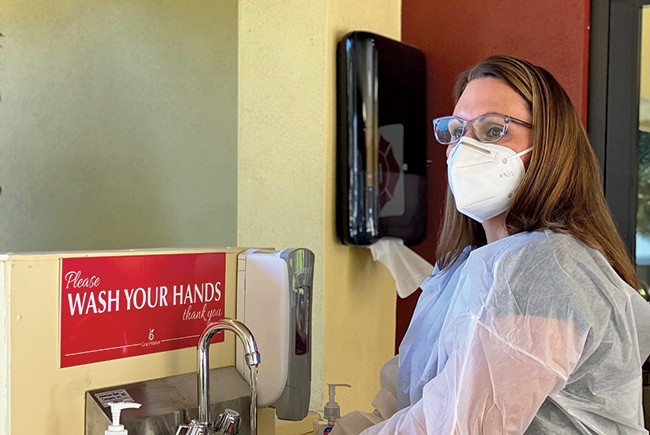 After having no COVID-related fatalities early in the pandemic, Grace Manor experienced an outbreak that left seven patients dead. The facility made changes and was COVID-free again as of early July.

In mid-March, as Florida began to see an uptick in COVID-19 cases, Gov. Ron DeSantis issued a temporary ban on visitors to nursing homes and assisted living facilities, where roughly 155,000 Floridians live. At the time, the state had 77 COVID cases, but it was already becoming clear that the virus hit the elderly and infirm harder than younger, healthier people. Weeks earlier, the virus had ravaged a Seattle-area nursing home, killing dozens of residents. Florida officials worried the same would happen here if they didn’t take steps to protect its most vulnerable citizens.

During a news conference announcing the changes, Mary Mayhew, secretary of the state’s Agency for Health Care Administration (AHCA), noted the facilities weren’t equipped to deal with virulent respiratory pathogens in the same way that hospitals were, nor were they expected to. “They do not have negative pressure rooms. They do not have skilled staff ready to use N95 masks. That is above and beyond what is today expected of them for infection prevention,” Mayhew said — but she urged them to be vigilant. “We can’t let this infection into a facility for our elderly, into our longterm care residential programs.”

The state took other steps. It required daily temperature checks for staff and workers coming and going from facilities. Staff were instructed to wear personal protective equipment (PPE), and the Division of Emergency Management helped facilities shore up short supplies as best it could. When infections popped up, the state sent in medical “strike teams” backed by National Guard members to test staff and residents. The Veterans Administration dispatched 15 clinical support teams to assist with infection control at 67 facilities.

Florida officials also adopted a strategy of transferring COVID-positive residents out of facilities if they couldn’t be isolated — and prohibited hospitals from sending COVID-positive patients back, unless the facility has a COVIDonly isolation unit. The decision was in stark contrast to directives in several northern states, including New York, which until early May required nursing homes to take recovering COVID-19 patients. Many have blamed the policy for spreading COVID and contributing to 6,300 nursing home deaths in New York, though a New York State Department of Health analysis concluded that the fatalities were more likely “related to infected nursing home staff,” not transfers, based upon the timing of when the deaths occurred.

Whatever the case, the industry in Florida can claim some success in keeping COVID-19 at bay. Although 431 facilities had reported at least one COVID fatality as of July, more than 900 had reported zero deaths.

Avante, an Orlando-based company that manages 12 skilled nursing facilities and two assisted living facilities in Florida, reported nine COVID-related deaths — seven at its Boca Raton facility and one at its Lake Worth location and one at its Orlando facility. But as of late July, not a single resident in any of its other facilities had died from COVID.

Kimberly Biegasiewicz, vice president of clinical services for Avante, credits strong state leadership by Mayhew and DeSantis. She also says her company’s “prudent system” of planning and communication made a difference. “We had our facilities on a daily call since February, seven days a week, with our facility administrators and directors of nursing requiring updates on status as far as residents (symptoms), staff call outs and supplies — to the point that administrators were counting every piece of (PPE) supply in their facility,” Biegasiewicz says.

When facilities ran short, she says, the corporate office would send supplies over. The company also made sure it could separate residents who were sick from those who were well. Today, the company is helping to manage a COVIDonly isolation facility in Miami and created COVID-19 dedicated isolation units at its facilities in Boca Raton, Melbourne and Orlando.

But when facilities failed to keep the virus out, the toll often was horrendous. In June, Hialeah Nursing and Rehabilitation Center, a 276-bed facility just a few miles from Hialeah Hospital, reported a spike in cases — 169 residents and 72 staff tested positive for COVID. By July, 52 residents had died from COVID.

In Pinellas County, 28 residents at Seminole Pavilion Rehabilitation & Nursing Services died from the virus. Five miles away, at the Gulf Shore Care Center in Pinellas Park, 23 residents and one staff member died — and 10 miles to the east in St. Petersburg, Bon Secours Maria Manor Nursing Care Center reported 21 fatalities. The 72 deaths at thethree facilities made up 16% of the 460 total deaths in Pinellas County.

As of Aug. 4, at least 3,155 residents of Florida long-term care facilities had died from the virus — accounting for about 45% of the state’s deaths so far, according to data posted by the Florida Department of Health. As of the same date, 11,682 (3.5%) residents and staff tested positive for the virus, up 130% from one month earlier.

FLORIDA TREND’S examination of available data indicates little linkage between how well a facility had performed on state and federal inspections and the likelihood that it would experience an outbreak of COVID-19. Of the 30 facilities with the greatest number of fatalities, 15 are on the state’s Nursing Home Watch List, and 15 are not. The state's watch list tracks facilities that are operating under bankruptcy protection or have been on a “conditional” licensing status during the past 30 months based on inspection results.

There’s even less of a link when looking at federal ratings data: Of the 30 hardest hit facilities, only 10 scored “below average” or “much below average” on CMS’ quality rating system, which rates facilities in terms of health inspections, staffing and other quality measures. The Hialeah Nursing and Rehabilitation Center — which tops the list of elder care facilities with deadly outbreaks — had earned a three-star “average” rating on health inspections and an overall “above average,” four-star rating from CMS.