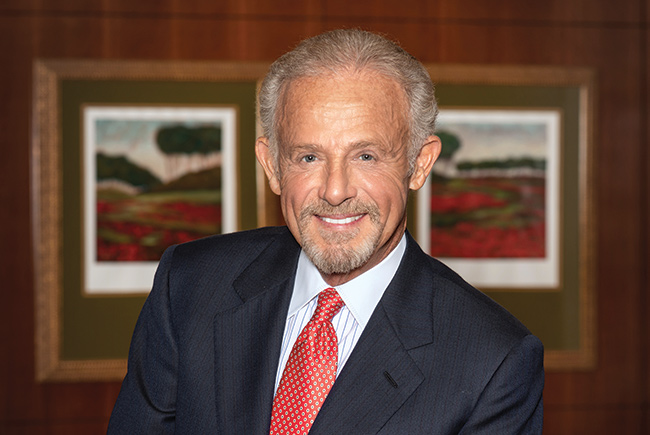 Steven Yerrid, 70, is a trial lawyer based in Tampa. "You leave a little piece of your soul inside the courtroom after every case."

Steven Yerrid is a Florida Icon

My parents divorced when I was 7. As a single parent, my mom not only became my hero and my best friend, but the best person I ever knew. We had hard times. She was gorgeous, and sometimes to supplement her income she’d model. She’d skip dinner some nights and tell me it was because she was watching her figure, and I believed her. It wasn’t until much later that I realized that she couldn’t always afford to feed us both.

The lawyers on the other side may feel bad if they lose a $100-million case, but if I lose a case and I look at a widow with four children and know they’re going out of that courtroom probably never having another case, probably being on their own with absolutely no help but my legal representation, it consumes the life force out of me. Have I paid a price? Oh, yes. I’ve paid a price with my family, with my friends, with my law partners, with everyone. Because when I’m ensconced in that bubble, it seems nothing else really is on my radar scope. I’m consumed by the case.

In 1980, I got the Sunshine Skyway Bridge case. I had the ship’s pilot, John Lerro. No one thought we could win. That case, I learned what a scapegoat looks like up close and personal because the state of Florida wanted to pin the whole tragedy on John Lerro and take it away from their own shortcomings. That bridge was unprotected. It was shoddily constructed. It should not have collapsed, but it did. That case showed that you don’t have to have a lot of folks lose their life before you put up a stoplight.

I was 17-0 as an amateur boxer. I got to meet Muhammad Ali. I knew Ferdie Pacheco very, very well. Angelo Dundee and I became friends. I became very aware of boxers who were impaired, brain damaged. Boxers for many decades have been suffering from CTE and brain problems, so I’ve helped them. George Steinbrenner was a dear friend of mine. In 2000, he was instrumental in getting me appointed co-chair of the U.S. Olympic Boxing Trials, so I did that. Believe it or not, Ferdie and Angelo put me up for the Florida Boxing Hall of Fame and I got in. So, I’m not only in the Trial Lawyers Hall of Fame, I’m just as proud to be a member of the Florida Boxing Hall of Fame. Now, I’m not in because of my boxing. I got hit enough to know I wasn’t a great boxer, and I had to quit. I was getting the hell knocked out of me, and I wanted to stay pretty.

When I got the call from Fred Levin and Gov. Chiles to join the tobacco case, the reason it took me five seconds — less actually — to say yes was simple. My mother died at age 67 from a smoking-related illness. My father died at 58 from a smoking-related illness. I wanted to nail the tobacco industry. So when I got the opportunity, no matter how little a chance everyone thought we had to win, I was going to go for it. The impact we had in Florida was just the tip of the spear. Our work was passed on to the remaining states, and that’s what caused a multi-state settlement of $200 billion. The advertising concessions that we extracted from them — eliminating billboards, vending machines, the Marlboro Man, Joe Camel, the Virginia Slims, the list goes on and on — were also passed on. We also made them pay for the ‘truth’ campaign to tell our youth about the dangers of nicotine addiction. The decline in youth smoking has demonstrated the number of lives that were able to be saved by the work of a few very courageous trial lawyers who used their own money and took the risk of a lifetime to take that case on.

I’ve been in the deepest parts of the Gulf of Mexico and gone down 30 or 40 feet and held my breath, and it’s like being in space. It’s all dark blue. No up. No down. No side to side. It’s like being suspended in beautiful, pure blueness.

The best way to suppress the truth is to wipe out the media or wipe out the media’s credibility. Without the media, what’s going to happen — if the media continues to be an endangered species and then an extinct species — is that the truth will become whatever it is those in power want it to be. And on that day, democracy will die.

I forgave my father when I was about 13, and I was a loving son until he died at age 58. He was a lovely man, except when he came back from work late at night. He was not himself and could get physical with my mom and, of course, I had to step in for my mom because any son worth his salt was going to do that, although I knew the outcome. My dad was an undefeated heavyweight boxing champion in the Pacific theater during World War II. But I know he didn’t mean it, and I know he had a problem, and I’m so glad I forgave him.

The new Sunshine Skyway Bridge is looked at as a template for modern bridges all around the world as far as safety and good construction. So at least those 35 people who lost their lives 40 years ago didn’t die in vain.

The four words on the U.S. Supreme Court, carved in stone, have always meant something to me — ‘Equal Justice Under Law.’ No matter how rich or powerful they are on the other side, I can match up, and that’s a good feeling.

I’ve outlived my dreams, man, and that was hard to do because I dreamed big.