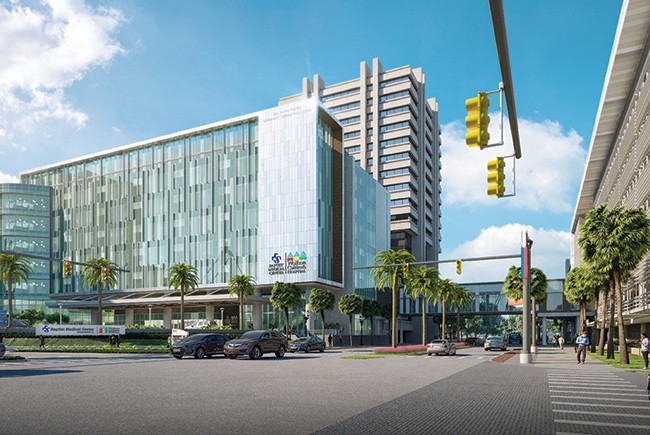 A rendering of the hospital's new building, which will be opened in phases. 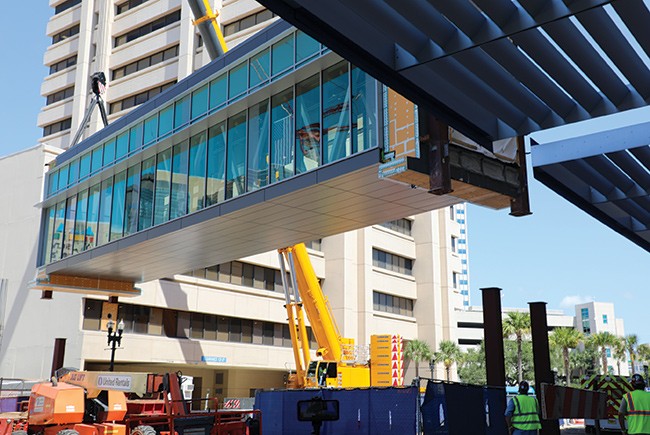 A skybridge over a four-lane street will connect the garage and Wolfson Children's Hospital.
< >

Correction: An earlier version of this story did not include Baptist Medical Center Jacksonville. It has been corrected.

Wolfson Children’s Hospital completed the first phase of a multi-year, $200-million construction project in May. The hospital, one of five owned by Baptist Health, placed a 110-ton steel skybridge over Palm Avenue in Jacksonville.

“Today, Wolfson’s volume by discharges is the second in Florida,” says Michael Aubin, president of Wolfson Children’s Hospital. “When we finish the project, we’ll have just under 300 beds, which will make this the largest children’s campus in Florida.”

Floors three through five will each house 20 five-bed neonatal units with private rooms for parents. The rooms will include a bed, a bathroom, a wardrobe and a television.

The sixth floor will be a 26-bed intensive care unit, which will also have private rooms. The seventh floor will be part neonatal care units and part critical care. Though the critical care tower will be used for pediatrics initially, all the tower’s new rooms are designed so they can be easily converted to adult ICU rooms, if needed.

“We’re trying to build a building that’s going to last 40 to 50 years,” Aubin says. “Using a universal design costs more on the front end, but in the end, it’s the right thing to do.”

A little more than 10% of Wolfson Children’s Hospital's patients come from outside of the South and from other parts of the world.

Aubin expects to open the tower in phases over five years beginning December 2021. Initially, the hospital will hire 35 to 40 staff members, including nurses and respiratory therapists. Once fully operational, the new critical care tower will add 100-plus jobs in Northeast Florida.