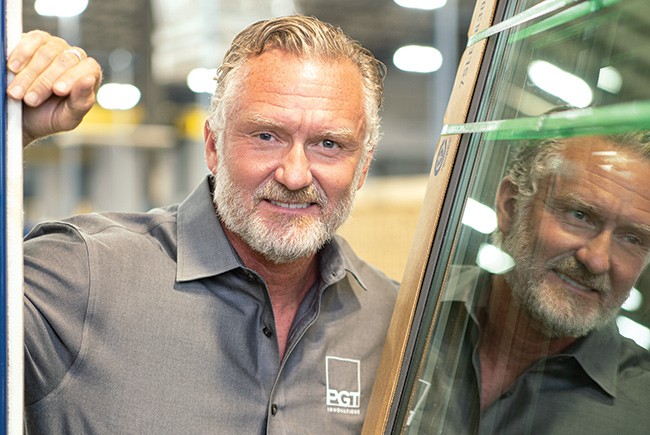 Recessions and a pandemic keep getting in the way of CEO Jeff Jackson’s plan to expand pioneering window maker PGT Innovations. 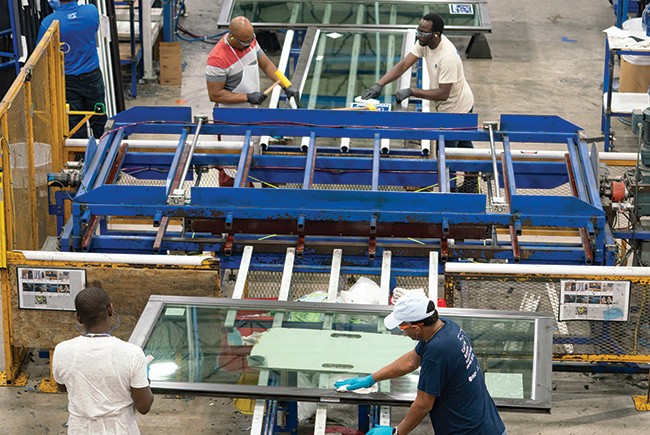 CEO Jeff Jackson’s plans to grow window maker PGT Innovations into a national player have faced more than their share of challenges.

As March virus worries turned to April’s lockdown, policeman-turned-accountant-turned-executive Jeff Jackson traveled from his company’s home base in North Venice to visit its factories in Miami-Dade four times in four weeks — trips aimed at reassuring workers and managers. He visited Tampa twice and queued up a trip to Phoenix.

“You can’t lead by phone. If you’re going to lead, you have to be present and in sight,” says Jackson, president and CEO of window and door manufacturer PGT Innovations, as he falls into a stream-of-consciousness on managing. “I wish I had a playbook for this, but you really don’t. You kind of navigate, but things can change. You’re constantly trying to communicate. … You’ve got to listen. … Make sure everybody knows their health and safety is our first priority. Without our folks, we can’t build windows.”

The coronavirus isn't the first big storm Jackson has faced since he arrived at PGT in 2005. He came with a clear vision of growing the company into a national player, but events seem to keep hurling recessionary two-by-fours into the glass.

A native of west Georgia, Jackson grew up “really blue collar,” the son of a firefighter and a mother who worked in a sewing machine shop. He credits it with helping him relate to a workforce made up mostly of hourly wage earners. To put himself through the University of West Georgia, Jackson worked as a security guard and later a police officer in Carrollton. A criminal justice major, he had a plan to join the FBI “or something like that.”

Something unlike that happened. In 1987, at age 21, he ran into a cohort of Delta flight attendant trainees in an Atlanta bar. Seven weeks later, he and one of them, Lisa, eloped. She thought police work was too dangerous. He switched to accounting.

After graduation, the new CPA joined KPMG in San Jose, Calif., then in Seattle and back to Atlanta. He says he learned from KPMG’s up-or-out operating philosophy. In Atlanta, he joined the hometown titan, Coca-Cola, working in mergers and acquisitions accounting, SEC reporting and preparing for quarterly board meetings. He followed that with a succession of corporate jobs with increasing levels of responsibility and leadership — Mrs. Smith’s Pies in Georgia, its purchaser Schwan’s from Minnesota and then Hershey in Pennsylvania, where at 37 he was vice president and corporate controller. A Korn Ferry headhunter brought him to PGT in Sarasota County in 2005.

PGT, at the time, was as hot as the autoclaves in which it bakes its windows. Founded in 1980 by Rod Hershberger and Paul Hostetler as a porch enclosure company called Vinyl Tech, the firm changed its name to PGT and began making windows in 1987. Its game-changer came after Hurricane Andrew in 1992. PGT was the first window maker to win approval from Miami-Dade County to use laminated windows as an impact-resistant substitute for shutters and panels. Winddriven demand propelled growth.

In 2004, New York private equity firm JLL Capital Partners bought PGT. (Hershberger stayed on as CEO; Hostetler had been bought out years earlier.) JLL wanted to monetize a share of its holding — it still controls 70% — and raise cash for acquisitions to broaden PGT’s products and geography. It hired Jackson as CFO and executive vice president to help lead a public offering.

After gray Pennsylvania, sunny Sarasota suited Jackson, Lisa and their three daughters. They made friends in the neighborhood with Chris Tomasso, an executive and later CEO of restaurant company First Watch, and Tomasso’s family, sharing movie theater trips, cookouts and vacations. The two executives had similar career paths, and their companies overlapped in supporting local charities and community organizations. “We talk a lot about our employees and taking care of our employees and how important they are to the success of our organization,” Tomasso says.

On the climb back, Jackson became COO and president in 2014. The company embarked on its long-delayed acquisition strategy. Already the largest window and door company in Florida, it purchased CGI, the second-largest player in Florida’s impact-resistant market, for $111 million. Two years later, PGT shelled out $102 million for Orlando- based WinDoor to get into the highrise, resort and high-end custom-home markets. PGT spent another $2 million to buy US Impact Systems in Miami and renamed it CGI Commercial to grow in the commercial market. It added “Innovations” to its name.

In 2018, Jackson moved up to CEO, while Hershberger remains chairman. PGT acquired Western Window Systems in Arizona, to open up more of the country as a market, for $360 million.

Internally, Jackson obtained board permission to grant all employees up to 100 shares, the first stock many had owned in any company. PGT began offering employees $1,000 per child per academic year in aid for college or trade school. (He says society overlooks the need for “a great welder, a great mechanic, great truck driver.”) Working with the local YMCA, PGT opened an onsite child-care building in Venice.

With the acquisitions and a booming economy, PGT ended 2019 with a $43.7-million profit on a record $745 million in revenue. The early returns for 2020 built on that. Moody’s, in a January debt rating, said PGT had conservative financial strategies, modest leverage, strong operating margins and — at the time, anyway — a stable housing outlook. As CEO, Jackson was about vision, growth strategy and reporting to his board. “The fun stuff — I like to say now,” he says.

Fun didn’t last. As the pandemic took hold, Jackson, 54, kept plants open and kept PGT’s 3,100 workers — 2,750 of them in Florida — working. The company is Sarasota County’s largest private employer. He created a leadership task force that met initially three times weekly. PGT acquired fogging machines to sanitize plants and amped up cleaning. Some workers were able to work from home. But since PGT is a manufacturer, for much of its workforce the strategy became distancing on the line and staggering shifts and breaks. About 120 workers who are 65 and older or at-risk took optional furloughs — “I don’t believe in telling any American what to do. The freedom of our country is precious to me," Jackson says — with benefits intact and the company making up what unemployment didn’t cover. Remaining workers were told to stay home if they didn’t feel well. Sick leave was expanded.

A few workers at the plant in Hialeah in Miami-Dade and a couple others elsewhere caught the illness. Jackson counts the company fortunate to have that low a number and to have avoided workplace spread. PGT shut the Hialeah plant, with workers at regular pay, for a weeklong cleaning and to give peace of mind about being safe at work. “It weighs on people,” he says.

PGT froze hiring and halted overtime. It moved up to June a long-term plan to consolidate work in Tampa and North Venice by closing a 320,000-sq.-ft. Orlando plant that employed 220. The closing will save nearly $4 million a year.

The repair and remodeling business — about half of PGT’s revenue — has fallen as homeowners hunkered down but home builders — the other half of revenue — have continued work on houses already underway. By late April, Jackson lifted the hiring freeze and in May authorized overtime. The company announced it will hire 150 new workers.

PGT enjoys strong liquidity — $69 million in cash as of May 1 and $76 million in an untouched line of credit — to weather a recession. Jackson plans to forge ahead with the growth strategy. Historically, PGT sold through two channels: Dealer-distributors, its largest, and through bigbox retailers such as Home Depot. This year, PGT closed on a $92-million deal to acquire Tampa-based window and door maker NewSouth Window Solutions to open a third channel — direct-to-consumer through NewSouth stores. “A home-run acquisition,” says analyst Philip Ng of Jefferies after seeing 50% order gains posted by NewSouth even after the lockdown began.

In May, PGT released its earnings for its first quarter ended March 31. Profit and revenue moved well up, but the impact of the quarantine hit in April, when orders fell by more than 30% from the first quarter’s torrid pace — but only by 10% compared to April last year. Other indicators looked promising, given the circumstances, with projected second-quarter sales down just 7% to 10%. The stock jumped on the semi-encouraging news.

Meanwhile, with a stream of caveats, he told analysts that PGT hoped by the end of the year to show annual growth within the state, where the company gets 80% of its sales. “There’s still opportunity left in Florida,” he says.

To make impact-resistant glass, the traditional "annealed" glass that's typically used in windows is layered with a piece of vinyl about one-eighth inch thick, then put in an autoclave to cook under heat (about 450 degrees) and pressure. If struck hard enough, the glass may crack, but wind can't penetrate the vinyl layer. To meet hurricane code, the frames also have to be strong enough to withstand an impact without being dislodged.

Under Jackson, PGT started an initiative called "Leading Ladies" — a platform for women in the organization "to learn, encourage and celebrate accomplishments and become allies. As a father to three daughters, I have a strong desire for women to be successful," he says.

PGT lobbied the Legislature this year, unsuccessfully, to eliminate the sales tax on the first $100 of each impact-resistant window and shutter that consumers have installed by a contractor. The state estimated the per-window tax break in the aggregate would save consumers, and impact state and local government revenue, $17.8 million the first year.