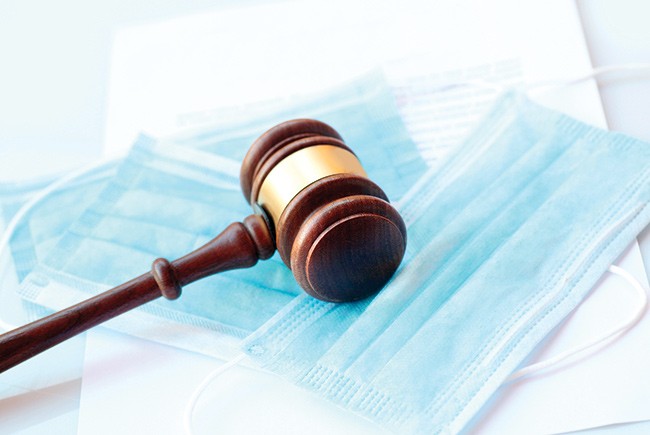 The coronavirus pandemic has triggered more than 170 federal and state lawsuits in Florida, and that's only the beginning. 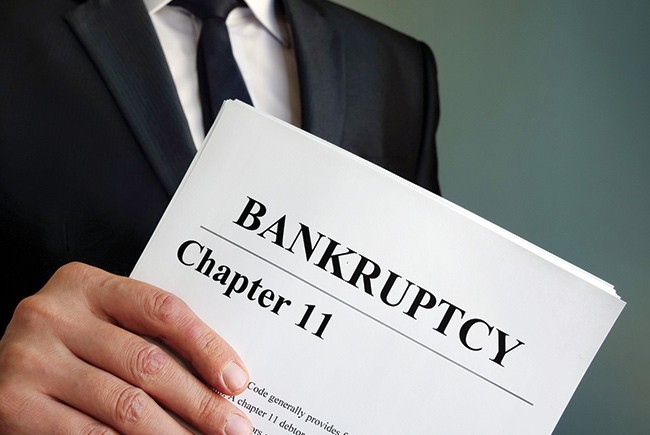 Attorneys expect a wave of company bankruptcies yet to come. 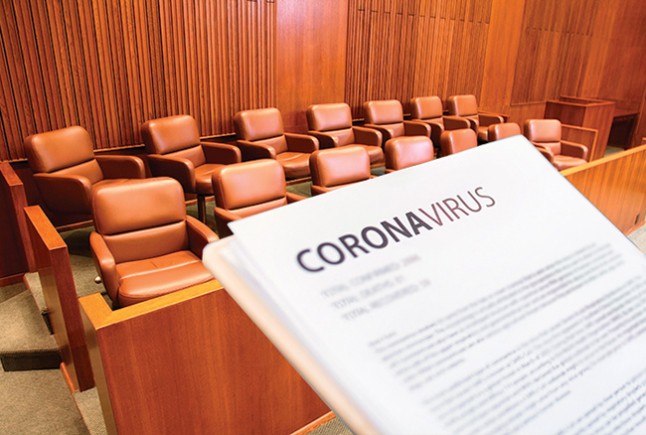 On March 13, Florida Supreme Court Chief Justice Charles Canady suspended jury trials on state courts and ordered that other proceedings canceled or postponed unless they could be done remotely. State jury trials are to resume this month. 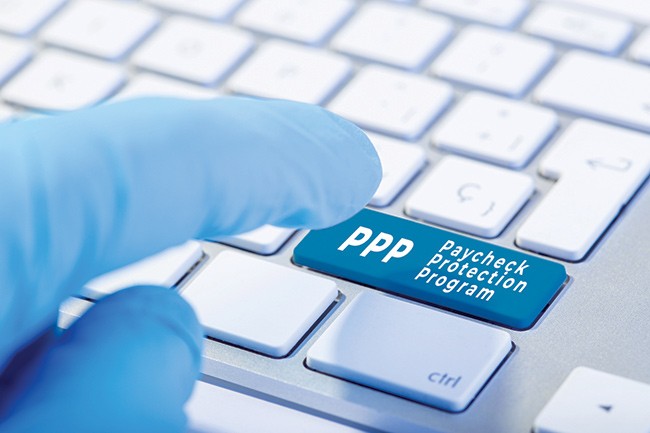 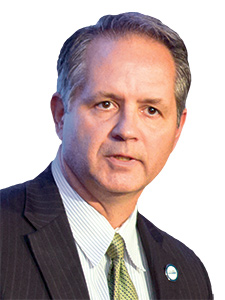 Off to the Races

International law firm Hunton Andrews Kurth says nearly 2,400 lawsuits related to the coronavirus were filed in federal and state courts nationwide in March, April and May. States with the most coronavirus lawsuits (as of May 29):

Miami-based cruise lines face a slew of lawsuits claiming they didn’t do enough to protect passengers and workers from exposure to the coronavirus.

Students at the University of Miami are demanding tuition refunds in the wake of school closures, saying remote learning doesn’t measure up to the classroom experience.

Insurers are being sued for allegedly reneging on their coverage obligations, and there’s been a spike in breach-of-contract disputes stemming from business disruption and social lockdowns. Meanwhile, hotels, restaurants and retailers are keeping their lawyers handy should customers and employees catch the virus and sue.

So vast is the litigation potential of COVID-19 that some in the business community are calling for legal immunity. In April, the Florida Chamber of Commerce wrote to U.S. Senate Majority Leader Mitch McConnell, asking for federal “liability shields” to protect businesses that follow government safety guidelines from negligence suits by customers and employees who get the virus.

“We want targeted safe harbors for employers who are doing the right things when it comes to COVID,” says Florida chamber President and CEO Mark Wilson. “We have over a million people out of work right now. The last thing we need is a tsunami of lawsuits hitting small businesses.”

But Miami trial lawyer Steven Marks, managing partner at Podhurst Orseck, says broad legal immunity would give businesses “a green light to do whatever they want.”

“I understand the concerns from both a liability standpoint and an economic standpoint, but we’re resilient people, and we’ll figure this out,” he says. “The court system has been a great check on corporate behavior. Any concept of immunity is a dangerous thing.”

Here’s a look at coronavirus litigation across Florida as the virus continues to spread:

A Fort Lauderdale man has sued Memorial Regional Hospital in Hollywood for prohibiting him from visiting his wife in ICU due to coronavirus restrictions, noting that she was hospitalized for an aneurysm-related issue and did not have the virus. According to the suit, the hospital posted a sign saying visiting hours were suspended for everyone except for the significant others of obstetric patients. The man’s suit calls the narrow exception discriminatory.

In May, Orlando-based law firm Morgan & Morgan said it would sue two Florida nursing homes — Opis Coquina Center in Ormond Beach and Suwannee Health and Rehabilitation Center in Live Oak — on behalf of families of patients who died after contracting the coronavirus. Florida’s nursing home industry has asked Gov. Ron DeSantis for immunity from COVID liability suits; as of May, he had declined to do so. Florida Health Care Association spokeswoman Kristen Knapp told the Orlando Sentinel that trial lawyers were “positioning themselves to profit from this tragic situation.” As of June 1, nursing home employees and residents accounted for about 50% of coronavirus deaths in Florida.

In a proposed class-action suit filed in Miami federal court, an elderly Arizona couple say they contracted COVID-19 during a 30-day cruise aboard the Costa Luminosa in February and March. The personal injury suit claims Carnival-owned Costa Cruises should have canceled the voyage given that other cruise ships already had experienced onboard outbreaks. Miami-based Carnival has said its ships followed “the direction of government and health authorities, using the best information that was available at the time.” After suspending operations in mid-March, Carnival plans to resume some North American cruises in August.

In Florida, Pace-based accounting firm Sport & Wheat CPA filed a proposed class-action suit in federal court, claiming two banks — Alabamabased ServisFirst and Georgia-based Synovus — violated the government’s intent by not paying accountants and other financial advisers for their work in helping small businesses apply for PPP loans. The suit says Congress meant for banks to pay advisers from the fees it gave lenders to administer the loans.

In another suit, Melbourne-based law firm Widerman Malek accuses the SBA of not disbursing disaster relief money as quickly as lawmakers intended. Last spring, Congress gave more than $50 billion to an existing SBA loan program (separate from the PPP) to provide up to $10,000 each to small businesses at risk of folding during the pandemic. The lawsuit lists about 60 Florida business owners who say they applied for the relief but had yet to receive any money.

Real estate litigation attorneys say they’re seeing an increase in “force majeure” breach-of-contract disputes between commercial landlords and tenants. Most commercial leases include force majeure clauses, which generally excuse landlords and tenants from contractual obligations due to an “act of God” such as a hurricane. “You have a lot of businesses arguing, ‘I’ve been entirely shut down, and I can’t operate, and therefore this qualifies as a force majeure event,’ ” says Jose Ferrer, a partner at Bilzin Sumberg in Miami.

Typically, he says, “force majeure clauses have not been drafted to include pandemics. They’ll say things like ‘act of God,’ and ‘act of God’ usually applies to environmental calamities. A pandemic doesn’t easily or readily fall into the ‘act of God’ category.”

Among his clients is a large retail chain that was unable to pay rent during the pandemic, prompting a range of responses from its landlords. “Some landlords have said, ‘We disagree that this is a force majeure event, but we get you; we know you’re having a hard time, and we’re going to work with you’,” Ferrer says. “Other landlords have said, ‘Forget about you. We disagree entirely. We’re giving you default notice, and we’re going to sue you.' ”

Boca Raton-based Berman Law Group filed a class-action suit seeking to hold the Chinese government liable for the deaths and economic damage caused by the coronavirus nationwide. The suit — one of several like it across the U.S., including two by attorneys general in Missouri and Mississippi — claims China initially hid information about the deadliness of the virus and allowed it to spread unimpeded to other countries. Legal scholars give the suits little chance of success, noting that foreign governments generally have immunity from being sued in the U.S.

In early May, Estero-based Hertz got a reprieve from its lenders over a missed payment on the lease for its rental car fleet but still had to file for bankruptcy. Hertz, which cut 12,000 jobs, warned that it might not be able to “negotiate any further forbearance or waivers extending relief past May.”

In addition to a predicted rise in personal bankruptcies by laid-off and furloughed workers, attorneys say a wave of Chapter 11 filings by companies is coming. Jason Johnson, a shareholder at Roetzel & Andress in Winter Park, says a statewide moratorium on commercial foreclosures in April, May and June staved off some bankruptcies, but that won’t last forever. He predicts numbers will start to shoot up by the fall.

“We have not seen anywhere near the worst of it yet,” he says. “There are a lot of companies that have been hanging on, and the pandemic is just the straw that broke the camel’s back. There also are companies that were fairly healthy before the pandemic but will struggle to make it after being closed for two months and not being able to conduct any business, while still having debt service requirements.”

From employee temperature checks to telecommuting, pandemic-related workplace practices have raised a host of legal issues for employers.

“Employers need to step up and show that they’re taking worker health and safety more seriously than they ever have,” Gordon says. “This can be as basic as increasing the number of times your facility is cleaned or ensuring employees have more space to do their jobs and move about. Communication is key, and active measures are key.”

After the 2002-04 SARS epidemic, regulators allowed insurance companies to exclude pandemics from business interruption coverage, which compensates policyholders for lost income due to an unforeseen closure. Pandemic exclusions are now common, but not universal. Miami attorney Steven Marks says at least a quarter of the business interruption policies he’s reviewed don’t exclude losses from pandemics — and yet some of the policies' holders are being denied coverage.

“Over the course of the past 15 years, (the insurers) have received enhanced premiums, but now, because of the scope of the costs, they’re denying these claims carte blanche,” he says. In March, Marks filed a proposed class-action suit against global insurance giant Chubb on behalf of a Fort Lauderdale restaurant, arguing that it should be paid for COVID losses because its policy does not have a pandemic exclusion. Marks, managing partner at Podhurst Orseck, also is representing a Miami beauty salon in a similar dispute with Lloyd’s of London.

In denying coverage, insurers have said the virus does not constitute physical property damage. The industry also has called for a government bailout or creation of a victims’ compensation fund. Meanwhile, the industry can expect to see more lawsuits, Marks says.

“I’ve seen many instances where brokers have bought the industry’s argument that there’s not coverage for this pandemic without delving into the details and wording of the policies. That has delayed a lot of people from bringing claims that otherwise are legitimate suits,” he says. “We’re going to be filing many more cases.”

An increase in divorces could be another side effect of the coronavirus. Along with being cooped up together at home, couples may be experiencing money problems due to a layoff, furlough or stock losses. “Even in the best of circumstances, this is a stressful situation,” says Robert Merlin, a family law attorney in Coral Gables. “People are being forced to stay together when they don’t necessarily want to be, and people are losing jobs or income.”

As happens after natural disasters, the pandemic inevitably will cause some couples to call it quits, says Merlin, who specializes in collaborative, or out-of-court, divorces. He predicts divorce caseloads will grow in the coming weeks and months. “When there’s a crisis like this, people think seriously about their future. This happened after Hurricane Andrew, as well,” he says. “A terrible catastrophe makes some people look seriously at whether to stay in a relationship that doesn’t meet all their needs.”