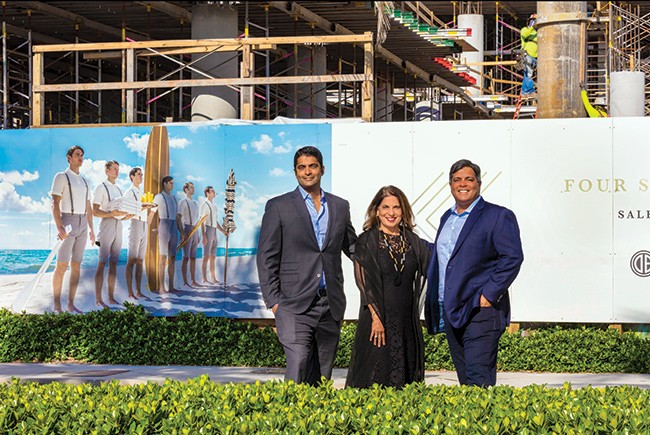 From left: Nitin, Ramola and Dev Motwani stand in front of the Four Seasons Hotel and Private Residences, which their company is co-developing. 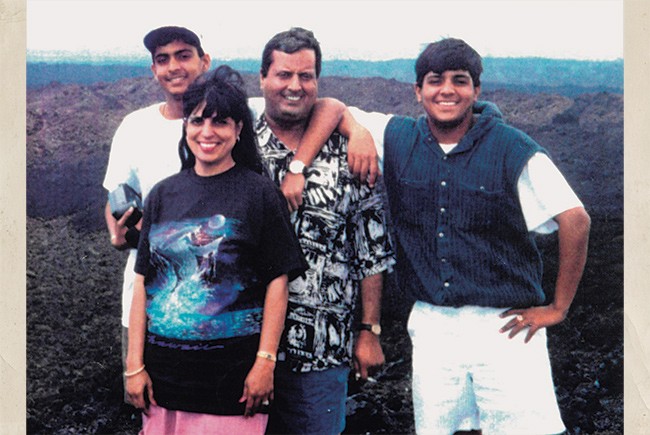 In their early days in Fort Lauderdale, the family - shown on vacation - shared responsibilities. 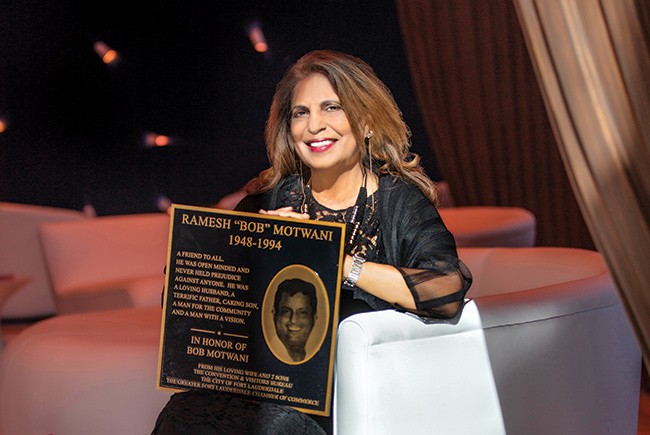 After Ramola's husband died, local officials honored him with a plaque that will be placed in front of the Four Seasons. 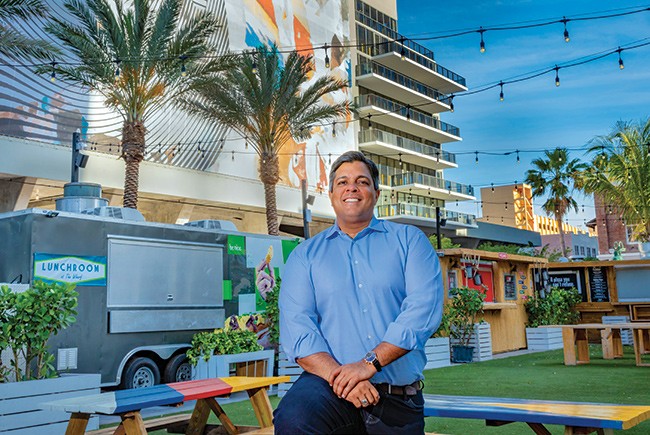 Dev Motwani assembled a group to buy the failed Riverfront development nine years ago. He sold two acres, where Society Las Olas is going up, and retained a parcel for a future hotel-condo tower. 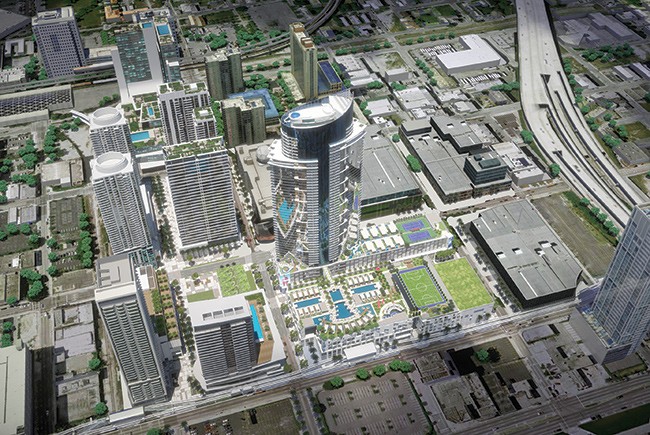 Art Falcone assembled the property for the Miami Worldcenter. 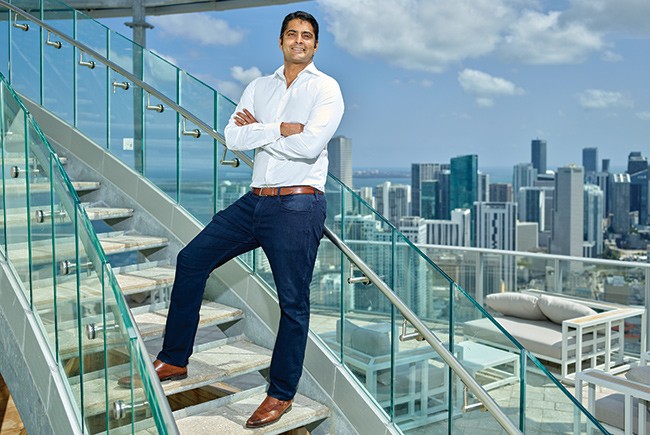 The Motwani family's first venture in Florida landed them in a fix — but ultimately on a trajectory they've ridden from mom-and-pop motels to luxury hotel and condo towers.

Before buying their first, small motel on Fort Lauderdale Beach in 1986, Bob and Ramola Motwani quizzed local real estate pros and motel owners. They were told the annual spring break boom made for a can’t-miss market. “You just work for a few months — you can almost close and go on vacation,” Ramola recalls being told. “Everyone just raved about it.”

Vacationing most of the year wasn’t part of the business-minded Motwanis’ DNA. Still, they bought the modest, if grandly named, 49-room Merrimac Beach Resort Hotel and moved into it with their two young sons, Nitin and Dev. Until then, their only hotel experience had been as guests. “We had confidence in hard work,” Ramola says.

The Motwanis came from India. Bob — his given name was Ramesh — came from a family in the electronics business. He earned an economics degree from what’s now the University of Mumbai. Ramola’s family was in timber and cinemas. She earned an undergraduate degree in economics and a law degree. In St. Charles, Mo., their first home in the U.S., they built an import business and lived a traditional suburban life. But Bob suffered from scleroderma, a condition that includes a strong susceptibility to cold. After visiting sunny Fort Lauderdale, the Motwanis decided to become motel owners. They had no interest in becoming stereotypical Indian immigrants owning a highway motel, Nitin says, and aimed higher even as they started with the Merrimac. They later added the Tropic Cay and Gold Coast — the kind of small, 1950s-era motels, with less than 200 rooms combined, that arouse memories in generations of Boomers.

The Motwanis’ due diligence had failed to detect that Fort Lauderdale’s citizens had become fed up with spring break, however. “Where the Boys Are” had given way to “Where the Drunk and Disorderly Are,” with tens of thousands of inebriated students swarming the beachfront and some, too regularly, falling to their deaths from balconies.

“It was six weeks of business, but the reputation lasted all year,” says Jim Naugle, who served on the city commission and as mayor. Shortly after the Motwanis arrived, the city cracked down, enforcing a new ban on open containers and arresting 2,500 during spring break 1986. The next year, according to reports at the time, occupancy at the Merrimac was down by half. Some operators lost their properties to foreclosure.

Many beach businesses fought the city's efforts to curtail spring break. “Not Bob,” Naugle says. “Bob was very, very supportive of giving it a try. They worked really hard. There were some really lean years between spring break and when we came out on the other side.”

Bob focused on financing, working with the city and building business. Ramola operated the motels. The boys worked restaurant tables, did maintenance and staffed the front desk from family quarters off the lobby. Dev learned Negotiating 101 as a youth, effectively pitching his properties’ assets — and discounting room rates if necessary. “You never let money go out the door, but you didn’t drop right away,” says Dev, now 39. “The price for something isn’t the price. It’s what someone’s willing to sell for and someone’s willing to buy for.”

The city, through taxes from beach properties, funded parking and street improvements and spruced up the beachfront. Marketing was geared to appeal to families. The beach transitioned from hosting 600,000 young people for spring break to 3 million visitors a year, Naugle says.

The Motwanis were on their way. Then, in 1994, Bob died unexpectedly. The local chamber, visitors bureau and city officials placed a plaque in front of the Tropic Cay honoring his contribution.

The family’s lender, perhaps fearful the motels would founder without Bob, wanted out. Ramola had to learn quickly how to refinance. “I came so close to losing everything,” she says. She got by, she says, by relying on “myself and my God.”

Too busy running motels to volunteer at school, she made it a point to know her sons’ teachers and stayed atop their academics. “If I didn’t have an A, she was meeting with my teacher the next day. One of the original tiger moms,” says Nitin, now 41. “She lived and breathed for her kids. We saw that, so we wanted to do our best to not burden her.” Nitin graduated as valedictorian from Fort Lauderdale High and went off to Duke University. A year later Dev was salutatorian and joined him.

The brothers were interested neither in running motels nor in returning to South Florida. Nitin joined Goldman Sachs in New York as an equities derivatives trader, while Dev joined Credit Suisse in structural derivatives.