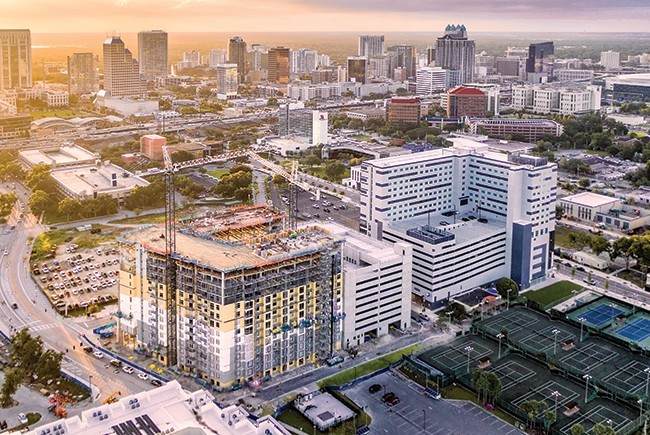 UCF and Valencia are building a joint campus on the western edge of downtown Orlando. 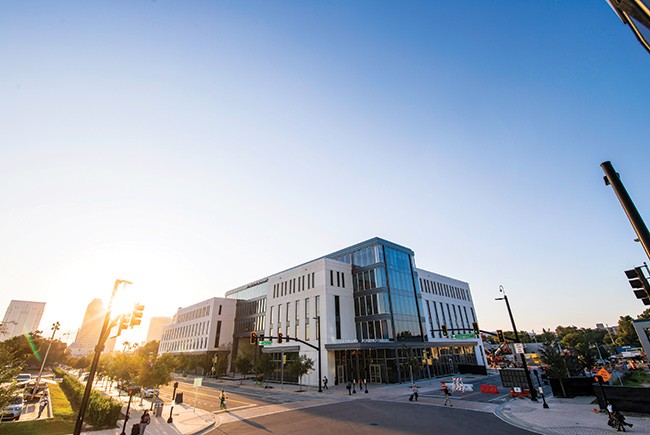 The Dr. Phillips Academic Commons is the heart of the UCF/Valencia downtown campus. 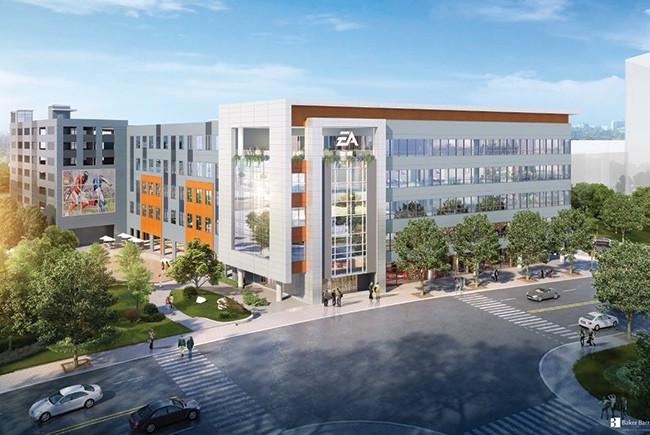 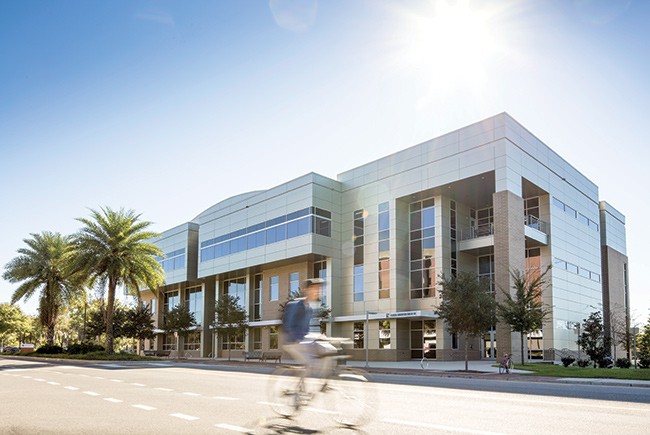 The Hub is part of UF's effort to connect to downtown Gainesville. 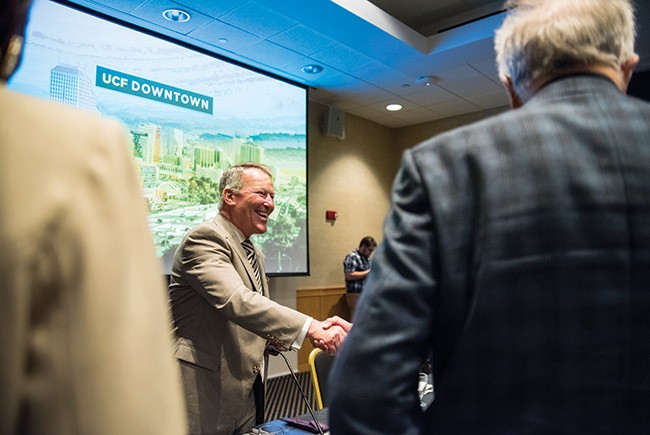 "Creative Village and the downtown campus is another example of a metropolitan research university stepping up to benefit the economic development of the community that it serves," says Orlando Mayor Buddy Dyer. 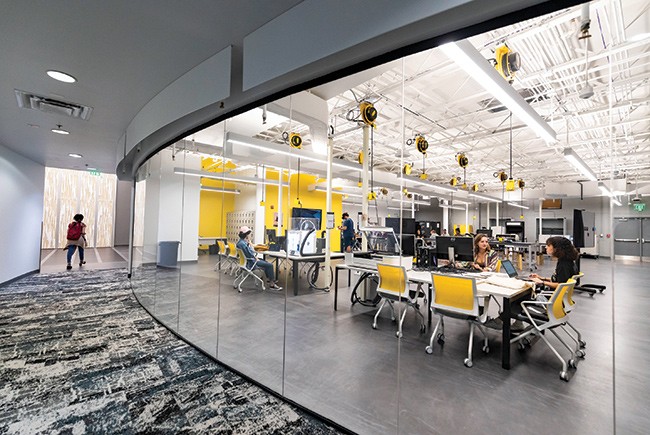 The Nicholson School of Communication and Media is located at the downtown campus. 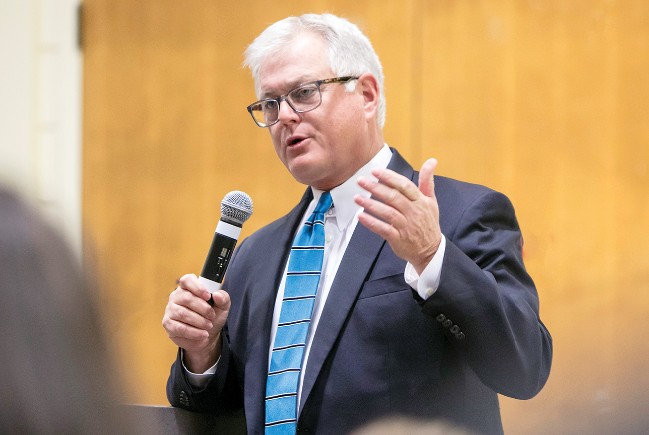 Last fall, more than 600 University of Central Florida and Valencia College students moved into the 15-story UnionWest building at Livingston Street and Terry Avenue on the west side of downtown Orlando. The privately developed building sits kitty-corner from the 148,000-sq.-ft. Dr. Phillips Academic Commons — the heart of a new, 15-acre UCF/Valencia campus that offers more than 20 academic programs, including degrees in digital and media communications, health information technology and administration and legal studies.

It also provides an anchor and critical mass for the city’s 68-acre, $1.5-billion Creative Village development. City officials and developers are betting that the influx of more than 7,000 students and 300 or so faculty and staff members will help transform the sleepy section of the city into a bustling innovation hub that will attract high-tech businesses and investment — and also provide a lift to the neighboring Parramore community.

Early signs are positive. Last October, just weeks after the campus opened, Electronic Arts announced plans to move its Central Florida headquarters — and more than 700 jobs — from Maitland to Creative Village. The video game giant, which recruits talent from UCF’s Florida Interactive Entertainment Academy, has said it could grow to 1,000 employees by 2025.

“All the cities are trying to attract the smart kids to their community,” says Orlando Mayor Buddy Dyer. “It’s not even about attracting companies anymore — because companies will follow the talent. It’s more about how you attract and retain talent, and we think that Creative Village is one of the very good ways to attract talent.”

Their sizable budgets give universities in Florida and elsewhere plenty of financial muscle in their local economies. Many are the largest employers in their region — as well as talent factories for industry. Over the past several decades, the larger research universities have become increasingly entrepreneurial, leveraging their patents and licenses to spur startups.

Beyond growing intellectual capital, many schools are expanding their physical footprints into so-called innovation districts. Like UCF’s new campus at Orlando’s Creative Village, the aim is to accelerate economic growth in disadvantaged or undeveloped areas by creating dense, “live, work, play” environments that will attract young talent, foster collaboration and spawn companies with high-paying jobs.

The University of Florida, among others, has embraced the concept as it works with Gainesville city officials and private developers to remake a 40-acre zone along the eastern edge of its campus near downtown into a tech district known as Innovation Square. A 106,000-sq.-ft. tech incubator called The Hub — with labs, light manufacturing space and offices — sits where Alachua General Hospital once was. It’s across the street from 800 Second — a new, 55,000-sq-.ft. office building — and within walking distance of Infinity Hall, a 90,000-sq.-ft. residence hall “innovation and research space,” include all with more than 19,000 square feet of ing a lab for making mobile apps, a graphic design studio and a private business incubator. Both were privately developed.

While some 80 companies operate in the growing area, university officials have said they hope it will eventually become a magnet for Fortune 500 companies, as well as for more eateries, shops and housing. In the meantime, they’re counting on the Opus Coffee shop at 800 Second and a planned food truck park to create more “collision space.”

Other schools are jumping on the bandwagon as well.

The University of North Florida is seeking $23.8 million in state funds to establish a medical training program and center called UNF Medical NEXUS — or “UNF MedNEX” — in Palm Coast, about halfway between St. Augustine and Daytona Beach. The project aims to grow the region’s pipeline of health care workers while creating a “hub of scholarly and technological advancement in health care fields for Northeast Florida and the state,” according to the university’s legislative budget request.

The proposed campus at Palm Coast’s Town Center could also provide a boost for the 1,500-acre, mixed-use development, which took a hit following the Great Recession. In a letter of support for UNF’s proposal to the Florida Board of Governors, ALLETE Properties, the largest landowner in the Town Center, noted that the campus would be located “between a high school, City Hall and AdventHealth” and within “walking distance of restaurants, galleries, theaters and parks.”

Stephen Coulston, an Austin-based principal architect and urban designer for Perkins and Will who specializes in the planning and design of campus plans, research parks, and innovation districts, says the trend is all about creating spaces and places where people can collaborate. A typical innovation district may include everything from spaces for programming and job fairs to co-working space to cafes and bars.

“I’ve sort of coined a term called ‘bumpability’ — which is creating opportunities for accidental interactions between faculty, researchers, students or employees who may not otherwise have an opportunity to convene,” Coulston says.

There are other benefits for schools, including relieving crowding on main campuses. That was one reason the University of South Florida jumped at the chance to move its medical school to Tampa’s downtown waterfront ("Daytime Anchor," 52).

Schools also are taking advantage of public-private partnerships to pursue opportunities for which traditional state funding might never materialize.

Randy Avent, president of Florida Polytechnic University in Lakeland, is supporting the development of a live-work-play research park on the 4,500 acres surrounding the university’s 170- acre campus in Lakeland, and he’s working with the Central Florida Development Council on a public-private model to get the project going.

“The state’s not going to have a war chest of funds to build it out, like it has for other universities,” he says. Instead, he envisions high-tech companies leasing space in privately owned buildings and sharing it with Florida Poly so faculty and students can collaborate on new technology and products.