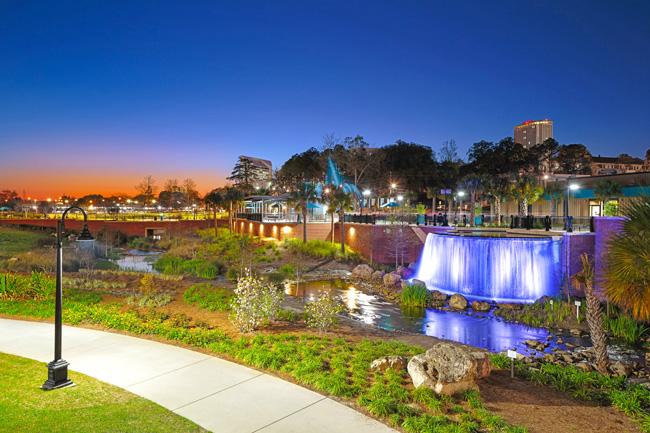 A central location between major Southern cities, sound infrastructure, improvements to bike lanes and heavily traveled corridors, and exciting projects with StarMetro and at Tallahassee International Airport illustrate how Tallahassee-Leon County is building for tomorrow.

As the gateway to Florida, Tallahassee- Leon County sits equidistant between Jacksonville, New Orleans, Orlando, and Atlanta, making it convenient for business and transport in a number of industries. Complementing this strategic location is the fact that Tallahassee is only a couple of hours from deep-sea ports via I-10 and CSX rail.

The city and county have been hard at work addressing an aging infrastructure with environmentally friendly and quality of life improvements. The $25 million Blueprint Tallahassee-Leon County projects include new corridors for bike paths, Segment 3 of the Capital Cascades Trail for stormwater retention, the Orange/ Meridian beautification project, completion of the Magnolia Drive Multi-Use Trail connecting Monroe Street and the Apalachee Parkway, and the Northeast Gateway at Welaunee Boulevard including sidewalks, trails, and a four-lane roadway.

As Tallahassee grows, plans are in the works to expand StarMetro routes and facilities. In development is a partnership with Florida State University to make Seminole Express, operated by StarMetro, the first all-electric bus fleet on any campus in the country, signaling the commitment to environmental sustainability.

In 2018, passenger travel at Tallahassee International Airport (TLH) reached a 10-year high with 800,000 people leaving from Tallahassee, contributing to a growth in the area’s economic impact from $400 million to $600 million annually. Currently, the city-county is in the midst of a five-year plan that uses the airport as a hub to grow the region’s economy by creating a foreign trade zone for the eight-county surrounding area. Executive Director David Pollard has a bold strategic plan.

“We are actively working with U.S. Customs and Border Protection, along with several other federal, state and local partners, to develop the required inspection facilities, infrastructure and capacity to position TLH as an international port of entry and future foreign trade zone. Additionally, we are working with industry partners on plans to develop over 450 acres of airport land with a focus on air freight, flight training and aircraft maintenance facilities in keeping with the growing demands of our region,” says Pollard.

These efforts, along with other regional economic development initiatives, will be a primary driver of growth. The city’s goal is to increase the annual economic impact of the airport to $1 billion by 2024.

At the same time, Pollard has his eye on ways to attract new air carriers and keep travel affordable.

Tallahassee-Leon County is located like a hub in the center of a wheel, with New Orleans, Atlanta, Jacksonville, and Orlando as the spokes.

It is only a couple of hours from deep-sea ports via I-10 and CSX rail, making it fast and convenient to move products and people in and out of the area. And because Tallahassee is situated in the northwest part of the state, the city is also a gateway to the rest of Florida.

• At just 20 minutes, average commute time in Tallahassee is 22% lower than the state average