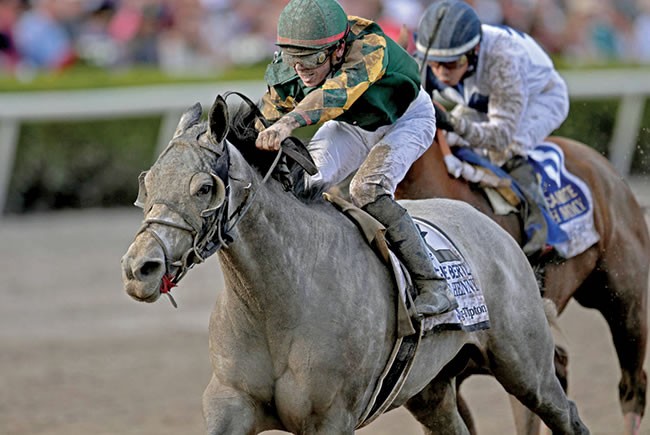 Ocala’s horse business has grown in size and political clout, even as thoroughbred racing draws fewer people to tracks.

On an overcast October morning, Kevin McKathan leans his elbows on a white board fence and looks out over a small horse ring. A reddish-brown thoroughbred filly, sired by Breeders’ Cup sprint champion Runhappy, trots by in front of him.

“She’s purrrty,” he says. “The way she walks — the way her shoulder is laid in — she’s really nice. I probably don’t have enough money to buy her.”

McKathan was shopping at a yearling sale in Ocala, where he owns and operates a thoroughbred training facility. Each fall, he buys several yearlings at auction, calculating that with the right training and grooming, the horses will increase in value during the next year. The practice — the equestrian equivalent of flipping houses — is known as pinhooking.

Wearing jeans and a weathered ball cap, McKathan pushes up his left shirtsleeve to show off his tattooed upper arm, which features the three Kentucky Derby winners’ names in cursive letters. “When we won the Kentucky Derby back to back in ’97 and ’98, we thought it would be something we’d do a lot of. But we figured out winning isn’t so darn easy. It’s a little special,” he says.

At the yearling auction, McKathan follows Runhappy’s filly into the auction room. Entering the bidding at $20,000, he casts the winning bid of $100,000. “That was good,” he says. “I had a higher number in mind, so I’m happy.”

McKathan figures he’ll spend about $25,000 on food and care during the next six to eight months, hoping to resell the horse in the spring at a profit. A promising well-pedigreed thoroughbred can fetch hundreds of thousands of dollars as a 2-year-old in training, when buyers have a better sense of its racing potential. (All yearlings officially turn 2 on Jan. 1.) Ocala’s annual 2-yearold thoroughbred auctions have been known to attract sheiks and other super-wealthy people from around the world. In 2019, 2,425 thoroughbreds were sold in Ocala for an average of $63,369.

McKathan says he once bought a yearling for $200,000 and resold it five months later for $1.75 million. “The great thing about this business is there’s really no limit on how much they can bring. The markup on a horse can be astronomical,” he says.

Ocala’s horse industry began taking shape in the 1950s, when Bonnie Heath II, an oilman and racehorse owner, decided to stand Needles, winner of the 1956 Kentucky Derby, as stud at his farm in Ocala. Over time, the industry has grown big enough for the Ocala region to proclaim itself the horse capital of the world.

The claim isn’t baseless. With one equine for every five people, Marion County has more horses and ponies per capita than any other county in the U.S., according to the Florida Thoroughbred Breeders’ and Owners’ Association (FTBO), an Ocala-based trade group.

More than 6,000 people in the county make their living on horse farms, and many more work in the local feed and tack stores, veterinary clinics and hotels and restaurants that cater to people in the business.

The industry draws tourists: Each winter, thousands descend on Ocala for a three-month show-jumping competition with a purse of $5 million. Ohio trucking magnate Larry Roberts is building what he says will be the country’s largest equestrian complex on nearly 4,000 acres in Ocala (“World Equestrian Center,” page 84).

In recent years, the industry has been helped along by a strong economy and a federal tax break — first enacted in 2008 and extended several times since — that essentially subsidizes the purchase of yearlings. The government allows buyers of thoroughbreds to take 100% of the horse’s purchase price as a business deduction, as long as the owner buys the horse to make money, not just as a hobby, and as long as the horse hasn’t raced yet.

“It’s an instant write-off,” McKathan says. “A rich guy who owes $1 million in taxes, instead of paying the government, might want to spend $1 million on horses and have a shot to make money at the end of the day.”

As Ocala’s horse industry has grown, so, too, has its clout. In April 2018, the Florida Department of Transportation, hoping to ease traffic congestion on I-75, proposed a highway between Tampa and Jacksonville. The industry joined with local business and community leaders to oppose the “Coastal Connector” project, saying it would cut through the heart of Marion’s horse acreage.

In August 2018, after meeting with the heads of Marion’s economic development organization and the Florida Thoroughbred Breeders’ and Owners’ Association, then-Transportation Secretary Mike Dew scuttled the plan. Among the properties that would have been affected was Live Oak Stud, a thoroughbred farm owned by Charlotte Weber, heiress to the Campbell Soup fortune.

Initially, the DOT “thought these were just big fields in the middle of nowhere,” says Louisa Barton, director of equine engagement at the Ocala/Marion County Chamber & Economic Partnership. “They had no idea they were cutting through some of the most beautiful properties we have.”