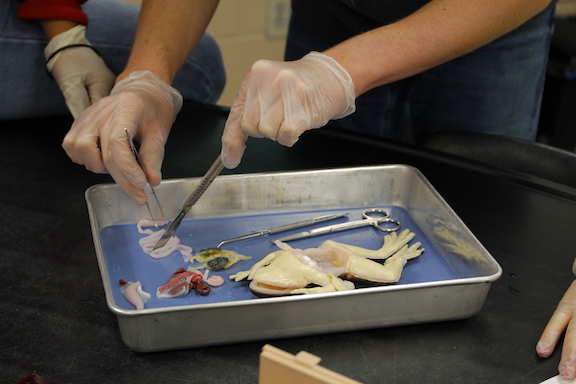 For the first time, students at a Florida high school are using realistic man-made frogs as a replacement for dead, formalin-preserved frogs in classroom dissection labs Wednesday.

Nearly 100 of the synthetic frogs were dissected by students, marking the official launch of this innovative new product designed to replace the use of real frogs in dissection labs.

J.W. Mitchell High School is the first school in the world to adopt the new technology, which is expected to be embraced by schools nationwide.

“The Pasco County School District is committed to being a leader in innovation and opportunity for students, so we are excited to announce that Mitchell High School is the first in the world to use SynFrogs in science labs, giving our students a learning experience no other students have ever had,” said Kurt Browning, Pasco County Superintendent of Schools.

The SynFrog mimics the visual and textural properties of a live female frog and is constructed using SynDaver’s patented synthetic tissue, SynTissue®. The frog features a synthetic skeleton, synthetic muscles along with highly realistic synthetic skin and organs, including a reproductive system with eggs.

“We’re excited to announce our revolutionary SynFrog, which is a far superior learning tool as it is designed to mimic living tissue. This makes it more like a live frog than the preserved specimens currently sold to schools for dissection labs,” said Dr. Christopher Sakezles, founder and CEO of SynDaver. “SynFrog not only looks and feels like a real frog, it’s physically safer to dissect than a real preserved frog because it doesn’t contain potentially harmful chemicals like formalin. We commend Pasco County Schools for taking this monumental step to advance science education, and we want to thank PETA for their funding support, which helped with the initial development phase of the product and enabled us to deliver it faster than previously anticipated.”

In addition to the enhanced educational experience provided by the SynFrog, it eliminates the use of dead, chemically preserved frogs. This increases safety, as preserved frogs can be dangerous to those who handle them. Additionally, the SynFrog is reusable and provides a solution to an ethical problem that has plagued educators for decades.

“We’re proud to have found a partner in SynDaver to bring this revolutionary new educational tool to life, replacing the outdated use of once-living frogs forever,” said Shalin G. Gala, PETA’s vice president of International Laboratory Methods. “We look forward to schools around the world adopting this state-of-the-art technology that will not only save millions of frogs, but is a far more effective and safer teaching tool.”

All of SynDaver’s synthetic humans, animal models and task trainers simulate the anatomy of live patients in great detail, including individual muscles, tendons, veins, arteries, nerves and organ systems. The company’s patented synthetic tissues are made of water, fibers and salts. Each of these non-toxic, non-latex tissues has been validated against the relevant living tissue for mechanical and physical properties.

For more information about SynDaver or the company’s products, visit https://syndaver.com/.

CenterState Bank and South State Bank have agreed to an all-stock merger that, if approved by regulators and shareholders, will create the eighth-largest bank headquartered in the Southeast.

There remain concerns among those supporting restoration of Miami Marine Stadium that millions of dollars may be wasted if the Miami International Boat Show continues to control the city-owned property in the peak tourist season.