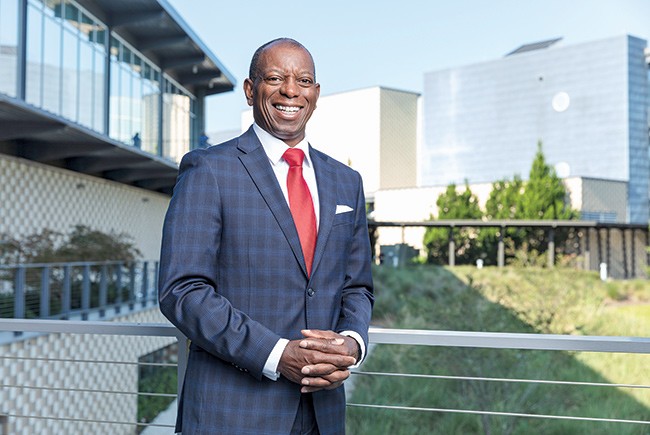 Keith Hoskins is a former Blue Angel and base commander for NAS Pensacola. 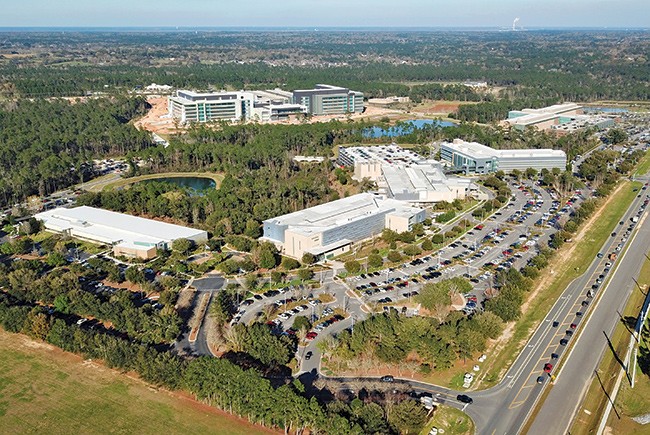 Keith Hoskins: A Sense of Mission

Navy Federal's new Pensacola leader is a former Blue Angel and base commander for NAS Pensacola.

In 1971, Keith Hoskins, then 5, attended an air show with his dad near their home in Parkville, Mo. Performing that day were the Navy’s Blue Angels. Captivated by their aerobatic stunts, Hoskins told his dad he was going to grow up to be a Blue Angel.

“He was like, ‘All right, just stay in school and stay out of trouble,’ ” Hoskins recalls.

He began flying small aircraft in his teens. By the time he finished high school, he had logged 200 flight hours in Cessna planes. At college, he studied electrical engineering, believing it would give him the technical knowledge needed to fly military jets — and played football on scholarship.

Hoskins realized his dream when he became a naval aviator who flew jets from an aircraft carrier. “I love challenging myself,” he says. In 1999, he joined the Blue Angels as a demonstration pilot.

During his 27-year Navy career, Hoskins led a 260-member air squadron based in Norfolk, Va., directed the Navy’s ROTC program and was commanding officer of NAS Pensacola, his last active duty assignment. In 2016, he joined the corporate world, initially overseeing Gulf Power’s major accounts and military affairs before heading its customer service and sales operations in Escambia and Santa Rosa counties.

When the top job at Navy Federal’s Pensacola campus came open last year, he jumped at the opportunity, he says. “Gulf Power is a phenomenal company. They provided me so many opportunities,” he says. “But I can tell you, after serving in the military for 27 years, I missed a part of that.”

Debbie Calder, his predecessor at Navy Federal, had gotten to know Hoskins when he was in charge at NAS Pensacola. After that, they worked together at Gulf Power — he as western district general manager, she as a board member. (Gulf Power has since been sold to Juno Beach-based NextEra Energy for about $6 billion.)

“You always wonder when someone retires from the military how is their performance going to translate to the private sector. It translated very well for him,” says Calder, now COO at Navy Federal’s headquarters in Virginia.

Part of Hoskins’ job involves supervising new employee orientation at the Pensacola campus, which includes lessons in military acronyms, terms and jargon and the rigors of military training. Employees also participate in role-play exercises to better understand the financial decisions military families face when a service member is called to duty.

Hoskins says Navy Federal’s employees “understand the mission here. If you walk around the campus, you’ll talk to a lot of folks who are connected to the military in some way. Either they served themselves or they’re a dependent or a spouse or maybe their father served at some point and they’ve always wanted to support the military.”

Background: Hoskins grew up in a Kansas City suburb as the youngest of six children. His father served in the Army, the National Guard and as a police commissioner and city councilman in Parkville, Mo. His mother was a homemaker. Hoskins, who went on to become a Navy fighter pilot and Blue Angel, says he and his father bonded over their love of airplanes. “We made model planes and went to air shows,” he says. “For him to see me fly as a Blue Angel, that was a special moment.”

Family: He and his wife, Lori, have three grown children.