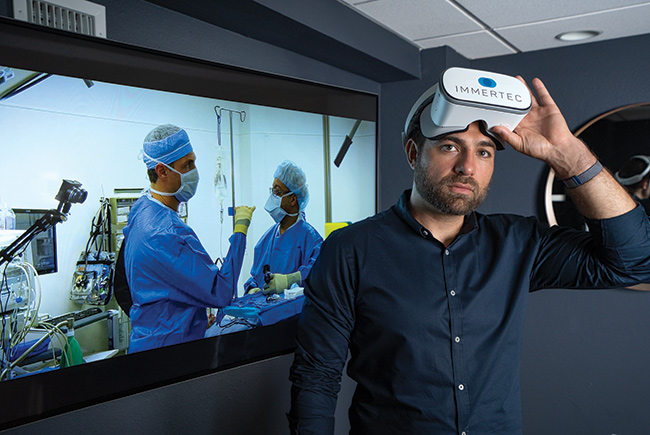 Immertec founder Erik Maltais was "the prototypical hard charger," says his commanding officer in the Marines. 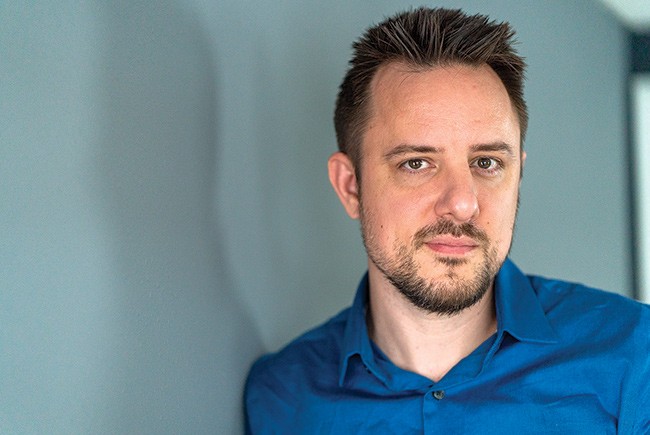 John Clagg talked Maltais into thinking about using virtual reality for something other than gaming: "I sat down with Erik and said, 'Man, this is not just a toy.'" 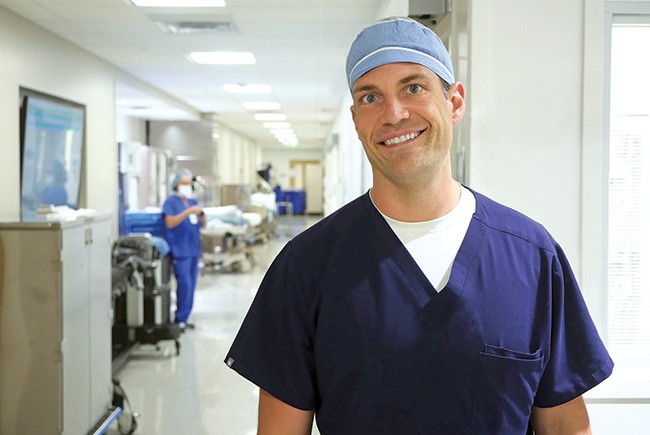 Dr. Marc Dean, the company's acting chief medical officer, is a telemedicne expert and ENT-otolaryngologist at Baylor Surgery Center in Fort Worth, Texas. 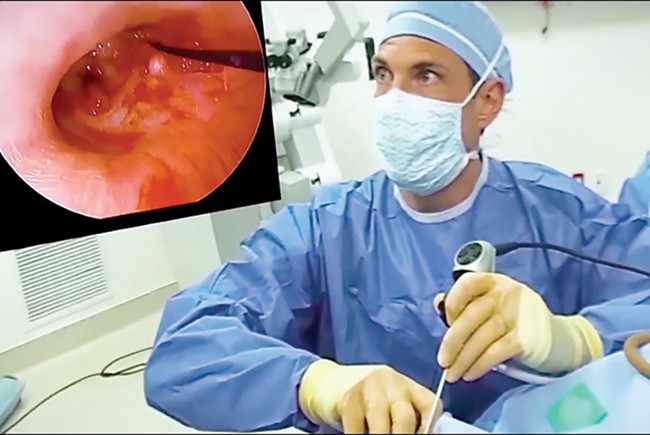 In Texas, Dr. Marc Dean shows a doctor in Mississippi how to perform a particular surgical procedure.

Erik Maltais starts most days with a handful of poker chips in his left pocket. Every time he makes a sales pitch or takes some other risk that may lead to rejection or failure, he moves a chip over to his right pocket.

For entrepreneurs, he says, risktaking and overcoming the fear of rejection are essential to success. He uses the poker chips as a way to reward himself for embracing those challenges — when his left pocket ends up empty, he treats himself to new clothes or time off work.

“It’s about trying to break down the stigma that’s connected to failure,” he says. “As an entrepreneur, you have to ask yourself constantly, ‘Am I feeling uncomfortable?’ If I’m not, then I’m not challenging myself.”

Maltais, 36, has been an entrepreneur in one way or another for most of his life. When he was 14, growing up in Manchester, N.H., he saw that no ice cream trucks served the city. He called up a truck company to see about leasing one, but it wouldn’t rent to a minor — never mind that he wasn’t even old enough to drive. Maltais persuaded an 18-year-old neighbor to rent the truck for him and says that they made several thousand dollars peddling ice cream to local kids.

Maltais grew up with two older sisters and a younger brother. His father was American. His mother, who taught Spanish at the University of New Hamsphire, was Peruvian, the daughter of a Superior Court judge in that country. She expected him and his siblings to be well read and articulate. At dinners, she’d make them discuss history, books or politics. “She’d be like, ‘We’re talking about Genghis Khan tonight,’ ” he says. “She wanted us to have mature conversations and challenge ourselves intellectually.”

His parents’ marriage was tumultuous. Maltais was 7 when his father left the home. “It was a very difficult divorce. There was a lot of abuse and stuff,” he says. “I learned a lot of things about the world at a young age that as an adult I had to get past.”

Maltais says he also lacked discipline. He got bored with school and dropped out. “I was a lost kid, just escaping,” he says.

At 16, he left home with $1,000 to backpack through Europe on his own. When he ran out of money, he began hustling for hostels in Italy and France. They hired him to go to train stations and solicit American tourists to stay at their hostels. Maltais, who got paid for each tourist he steered toward the hostels, was good at it, but reality set in. “Am I really going to do this for the rest of my life?” he remembers thinking.

He returned home and took classes days, nights and summers for two years to get his high school diploma. Yet, he still felt “broken,” he says. In 2004, he enlisted in the Marines.

Maltais served a year in Iraq during the U.S.-led offensive against insurgents in Fallujah. As a machine gunner in a mobile security platoon, he helped protect Marine units from attacks and roadside bombs. His commanding officer, Col. Raymond Coia, later recommended Maltais for an embassy security position.

“He was the prototypical ‘hard charger’ who never waited to be told to complete an assignment,” Coia wrote in a recommendation letter for Maltais. “His initiative and aggressiveness were infectious and had a distinct, dramatic and positive impact on his entire platoon.”

For three years, Maltais protected U.S. embassies in Europe, Asia and South America. He also helped with security for then-President George W. Bush during the Beijing Olympics and the World Economic Forum in Sharm El-Sheikh, Egypt.

Maltais wasn’t interested in a military career, however, and left the Marines after five years. “The Marine Corps was great for me. I’m very grateful,” he says. “But I’m not the G.I. Joe-type person. I don’t like guns, and I definitely don’t believe in war.”

Meanwhile, he had begun investing in Florida real estate. After the Marines, he moved to St. Petersburg, near where his paternal grandparents lived.

Along the way, he co-founded an e-commerce business called BBQ-aid that sold barbecue accessories. In three years, Maltais says, he and his business partner turned a $6,000 investment into a million-dollar company.

In 2016, Maltais hired Jon Clagg, a young software developer working as a consultant, to help with automation software. Clagg was fascinated by virtual reality and had begun to think about how it could be used beyond video gaming.

“I sat down with Erik and said, ‘Man, this is not just a toy,’ ” says Clagg. “Mark Zuckerberg was saying this would be the next big computing medium. We started coming up with some IT of our own.”

Two years ago, their software attracted some interest from Silicon Valley, but every interested investor wanted them to move to California. “We decided, ‘Let’s go back to Florida and leverage the traction we had here,’ ” Maltais says.

They were able to raise $500,000 “from a high net worth individual in Tampa” and, after studying Wall Street analyst reports, decided to focus on the medical training market, forming a company called Immertec. Dr. Marc Dean, a telemedicine expert and ENT-otolaryngologist at Baylor Surgery Center in Fort Worth, Texas, helped position the company’s proprietary VR platform, called Medoptic, for the medical field.

Immertec’s technology involves placing special cameras in an operating room. During a surgical procedure, doctors in other locations can use a Medoptic-enabled headset to watch the surgery in 180-degree 3-D VR. Users also can talk to one another remotely, ask questions and zoom in on the patient’s surgical site. Dean, now Immertec’s acting chief medical officer, regularly performs endoscopies that are livestreamed via the Medoptic platform.

Immertec’s competitive advantage is its speed: The network lag — the length of time it takes for data to travel between the sender and receiver — is less than 200 milliseconds, Maltais says.

“Our IP (intellectual property) is around compression and distribution. It’s exactly real time,” says Maltais. “You can ask questions, and there’s no lag time.” Immertec’s competitors use simulated training, he says — “you’d put on a headset and you’d practice surgery in a video game-like experience, or you’d watch a video recording.”

While the $500,000 from the Tampa investor helped get Immertec off the ground, another big break came from Steve Case, the AOL co-founder and billionaire investor, who had launched a national tour called “Rise of the Rest” to encourage startups outside the regular tech hubs of San Francisco, New York and Boston. When Case visited Tampa Bay on the tour, Maltais entered the pitch contest and was chosen as one of eight finalists for the $100,000 prize.

The night before he was to make his pitch before a panel of judges, he went for a walk around downtown St. Petersburg. Unsure about his presentation, he began to approach homeless people. He took $100 in $5 bills and paid them to listen to his four-minute pitch, refining the presentation until his audience could clearly understand what the company did. Maltais ended up winning. “The outside perspective is so key in life,” he says.

Along with investment, Immertec has attracted customers. Earlier this year, Johnson & Johnson launched a pilot program with Immertec to provide VR training on its products to about 3,000 doctors; financial terms were not disclosed. Maltais says Medoptic can be a valuable sales tool for medical device makers, who can demonstrate their equipment to doctors in remote locations instead of having to ask the physicians to travel.

Immertec charges customers a monthly fee for access to its software. Maltais, declining to disclose the fee amount, says he’s still testing different cost models. He says it’s too soon to discuss the company’s sales and profits, noting that it’s “in the research and development phase,” with plans to publish peer-reviewed findings soon.

“We’re finding physicians are willing to adopt more technology quicker so that you and I can get quality care,” he says. “It’s unacceptable that so many patients suffer and potentially die from illnesses that there are procedures for, but their physicians aren’t trained to do them.”

Immertec, which employs about 20 people, has outgrown its original office in Tampa and is temporarily based at a co-working space near downtown in an old industrial brick building with a food hall. Immertec will soon move to permanent offices nearby.

Mark Sharpe, executive director of the Tampa Innovation Partnership, a public-private effort to revitalize a rundown area around the University of South Florida, says Maltais is the face of a startup scene in the Tampa Bay area.

“He’s everything we were seeing in other innovation districts around the country,” Sharpe says, “and he’s in Tampa. He’s going to be a major player.”