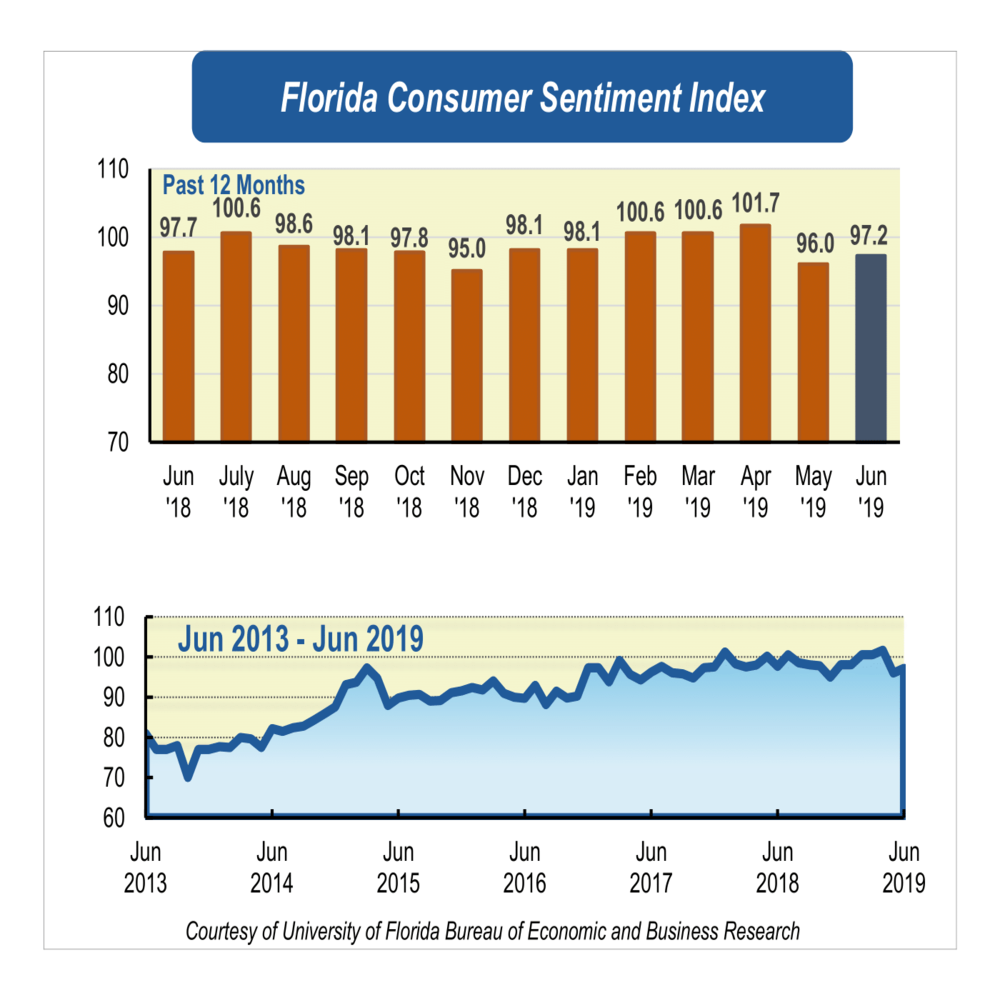 After a sharp decline last month, consumer sentiment among Floridians increased 1.2 points in June to 97.2 from May’s revised figure of 96.0.

Among the five components that make up the index, three increased and two decreased.

Floridians’ opinions about current economic conditions were mixed. Opinions of one’s personal financial situation now compared with a year ago increased 6.7 points from 87.8 to 94.5, the greatest increase of any reading this month. This opinion is generally shared by all Floridians across sociodemographic groups, but is stronger among men, those under age 60 and those with annual income levels above $50,000.

In contrast, overall opinion as to whether this is a good time to buy a big-ticket item like an appliance decreased 3.4 points from 104.0 to 100.6. Again, this sentiment is shared by all Floridians. This is the third consecutive month with a decline in this component.

“Although these two components of the index moved in opposite directions, together they showed that feelings regarding current economic conditions improved among Floridians in June,” said Hector H. Sandoval, director of the Economic Analysis Program at UF’s Bureau of Economic and Business Research.

Expectations of personal financial situation a year from now increased 2.4 points from 101.6 to 104.0.

Short- and long-term expectations about the future national economy were mixed. Expectations of U.S. economic conditions over the next year decreased 1.7 points from 94.0 to 92.3. These views are stronger among those age 60 and older and those with income under $50,000. This perception is shared by all Floridians with the exceptions of those with income levels above $50,000, whose reading showed a favorable change.

Expectations of U.S. economic conditions over the next five years increased 1.6 points from 92.8 to 94.4; however, respondents age 60 and older and with income under $50,000 expressed a decrease in this component.

“The increase in June’s confidence came mainly from consumers’ current financial situation compared with a year ago. Nonetheless, overall opinions are split by income level and age. Those with income level above $50,000 reported an increase in consumer sentiment, while those with income under $50,000 reported a decrease. Similarly, respondents under the age of 60 reported an increase in confidence, while people 60 and older reported the opposite. Overall though, Floridians are more optimistic,” Sandoval said.

Economic indicators in Florida remained positive. In particular, the labor market in Florida continued to add more jobs in May, and the monthly unemployment rate in Florida was 3.4% in May, down one-tenth of a point from April. Compared with the last year, the number of jobs added in May statewide was up 214,500, a 2.5% increase. The industries that gained the most jobs over the past year were education and health services, professional and business services, and leisure and hospitality. The only industry losing jobs over the year was information.

“Looking ahead, in view of the realized economic outlook in Florida, we anticipate consumer sentiment to remain high in the following months; however, considering Floridians’ expectations about the national economy in the short run, further declines in the major-household-item component might predict a slowdown in the consumption of durable goods,” Sandoval said.

Conducted June 1-27, the UF study reflects the responses of 453 individuals who were reached on cellphones, representing a demographic cross section of Florida. The index used by UF researchers is benchmarked to 1966, which means a value of 100 represents the same level of confidence for that year. The lowest index possible is a 2, the highest is 150.

Details of this month’s survey can be found at http://www.bebr.ufl.edu/csi-data.