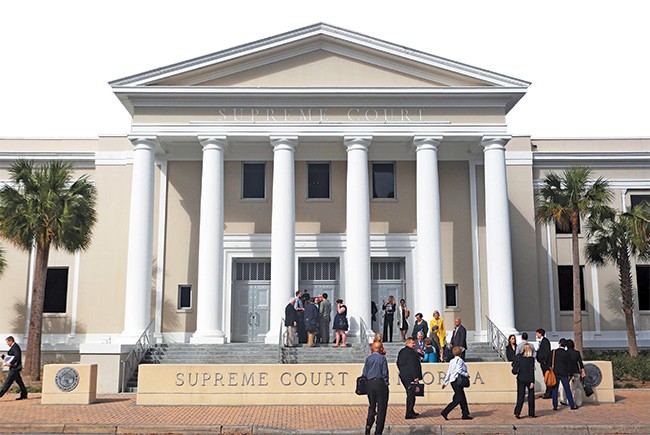 The new state Supreme Court has already made its impact felt. 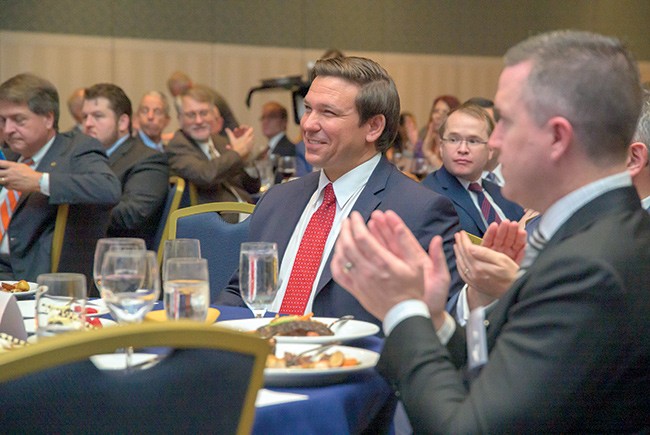 Gov. Ron DeSantis was greeted like a rock star at a Federalist Society banquet.
< >

On the evening of Feb. 1, conservative lawyers, judges and legal scholars from across Florida gathered for dinner inside a ballroom at Walt Disney World’s Yacht and Beach Club Resort. The banquet was part of the Federalist Society’s Florida chapter conference, and Gov. Ron DeSantis, who had taken office one month earlier, was the keynote speaker.

The crowd welcomed the new Republican governor like a conquering hero. The reason: DeSantis had just made three appointments to the seven-member Florida Supreme Court. DeSantis chose a trio of jurists — Barbara Lagoa, Robert Luck and Carlos Muniz — each of whom had been thoroughly screened by Federalist Society members. They replaced Justices Barbara Pariente, Fred Lewis and Peggy Quince, who had all reached mandatory retirement age and who had been the final remaining appointees of the late Democratic Gov. Lawton Chiles.

“Probably nothing we will do will end up having a longer impact than what we’ve already done in the first month, which is put three people on the Supreme Court,” DeSantis told the crowd in between repeated standing ovations. “And not just putting three justices on any seven-member court. You’re putting three justices on a court that, in my judgment, over the last generation had really gone astray. So this was a chance to transform our court from kind of a super-Legislature aligned with the Democratic Party into a legal institution, which it was meant to be.”

In just its first few months, the newly remade Florida Supreme Court has already delivered a string of decisions upending previous rulings in ways that have helped businesses and other defendants in civil lawsuits, affirmed the powers of the governor and shown much greater deference to the state’s GOP-controlled Legislature.

On Jan. 4, just days before the Florida Constitution forced the Chiles justices off the bench, the Florida Supreme Court issued a 4-3 ruling that sent tremors through the mortgage industry.

The case involved a Broward County homeowner who won an attempted foreclosure suit brought by Nationstar Mortgage, the Dallas- based lender that now operates under the name Mr. Cooper. The homeowner won by arguing that Nationstar was not a proper party to foreclose on a reverse mortgage that was originally issued in 2007 by Countrywide and later sold to Nationstar after Bank of America purchased Countrywide during the housing collapse. After getting the suit dismissed, the homeowner sought to have Nationstar pay her attorney fees.

The 4th District Court of Appeal sided with Nationstar, ruling that a borrower who wins a foreclosure case by arguing the lender is not a party to the loan cannot then use the loan contract to make the lender pay their attorney fees. But on its way out the door, the previous incarnation of the Florida Supreme Court overturned the decision and said those borrowers could make their lenders pay, at least in some circumstances. The ruling raised the litigation risks for banks and other real estate lenders pursuing foreclosures.