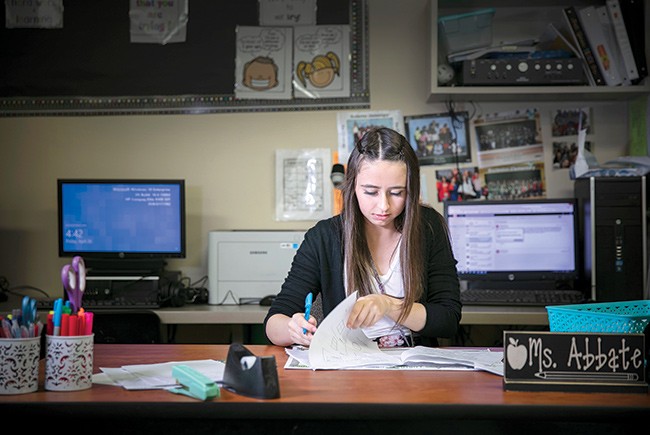 Alexa Abbate, who teaches at a school in Orlando, says her job is a lot more stressful than she ever imagined it would be. 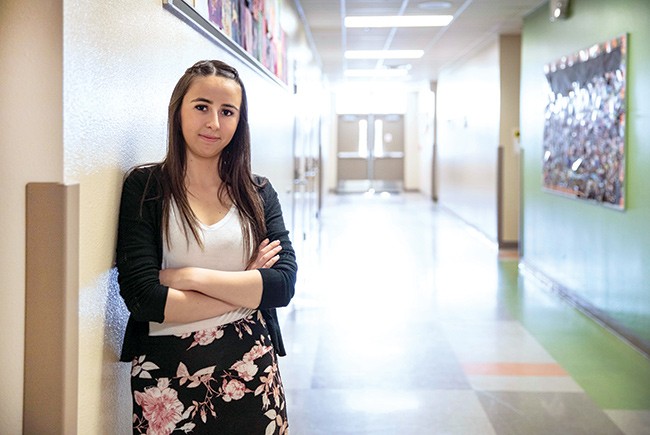 Abbate will start her third year of teaching next year. She'll be paid less but is hoping she won't have to put up with the same behavioral issues she had to deal with at Title 1 Eccleston.

One last chance: Teaching in Florida

Teaching is a dream come true for Alexa Abbate, but classroom challenges are testing her.

When they were both much younger, Alexa Abbate and her sister used to play make-believe games of school. Abbate loved it. She’d prepare ahead of time and make worksheets for the two of them to do.

Abbate’s mother was a vice president at a bank, and her father ran a carpentry business. Both of them, she says, tried to talk their eldest daughter out of teaching. She would never make much money, they warned. As she got older, in high school and then college, Abbate thought about a career in human resources instead. She enjoyed working with people, and the idea of helping new hires launch their careers appealed to the educator in her.

But then, while earning her associate’s at Florida SouthWestern State College, she shadowed a friend’s mother at her job as an elementary school teacher in Naples. That experience reawakened her interest in teaching. She graduated from the University of Central Florida in the spring of 2017 and started teaching second grade that fall at Eccleston Elementary in west Orlando.

Eccleston is not an easy assignment. All of its students are economically disadvantaged, and all but a handful are minorities. It was an F school in 2016, though it has since pulled itself up to a C.

But Abbate bonded with the principal, and there were other advantages, particularly for a new teacher starting at the bottom of the pay scale. First-year teachers in Orange County typically earn about $40,000 a year. But because Eccleston is a Title 1 school, it gets a supplement to cover an extra hour a day. There are also more after-school and summer tutoring opportunities. So Abbate was able to make more like $50,000 a year.

Abbate, who just finished her second year, wakes up every morning at 10 minutes to 7 and gets to the school by 7:30. Classes start at 8:30 and end at 3:30, but Abbate is usually at school until at least 4:30 every day. She has 18 kids in her class this year, a few less than last year.

To save time, Abbate says she and the four other second-grade teachers at Eccleston share the lesson-planning. Abbate plans math, her favorite subject. The school provides downloadable Power Point lessons, but they don’t allow for much flexibility, so Abbate says she tries to be a bit more creative. Earlier this year, she planned out a digital “math mystery,” creating a fictional scenario in which someone stole the swings from the playground and the students had to solve math questions in order to get clues. Abbate dressed up as a detective and gave her kids badges to wear.

Her job is more stressful than Abbate ever imagined. Six times a year, school administrators sit in on her class to evaluate her performance; their reviews determine whether she’ll get a bonus at the end of the year. Because Eccleston is a corrective school, district officials are frequently in class, too, critiquing her performance. Abbate says there is pressure to follow the scripted Power Point lessons, especially because her kids will begin taking the Florida Standards Assessments exams next year — tests that help decide school grades and funding.

Abbate says the biggest challenge is, by far, the behaviors she sees from students. Many of them come from difficult personal situations, and some have trouble controlling themselves in class. Students have thrown things at Abbate, cursed at her, erased things from her whiteboard and refused to do any work. One student lashing out can make it all but impossible for everyone else to learn, she says.

“That’s the really stressful thing. It’s hard because you can’t really do your job when they are yelling at you or refusing to do their work or trying to break things in your room,” Abbate says. “And the other 17 kids are all suffering.”

Abbate’s biggest complaint about the school is the lack of behavioral support. The district is reluctant to suspend kids — especially kids for whom school might be the only safe place in their lives — but Abbate says the result is that there are no consequences. She’d like to see the school do more to intervene with students, teach them coping strategies, provide them with mentors. That, of course, takes resources.

There was a point this past year when Abbate was ready to quit teaching. But her colleagues talked her into trying a different school first. She’s decided to leave Eccleston and take a job at Castleview Elementary — a new school in a fast-growing, more affluent part of the county.

Abbate says her biweekly pay will drop from about $1,500 to $1,100 without all the extras that come from teaching at a troubled school. But all of the students at Castleview are coming from other A-rated elementary schools. “I Googled their test grades and usually where there’s high test grades, there are better behaviors,” she says.

Her plan now is to give it a year. If she finds that she enjoys teaching again, Abbate says she will stick with it.

If not, it’ll be time to try that career in human resources.