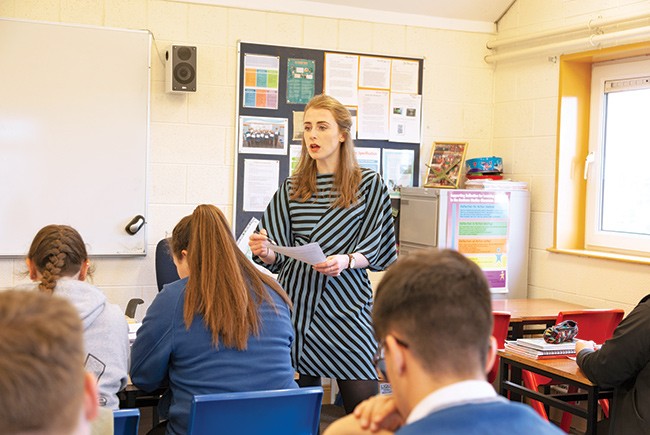 "I think Irish society can take teachers for granted. There's this idea that teachers have a cushy life. It's not like that at all," says Kathryn Freney. 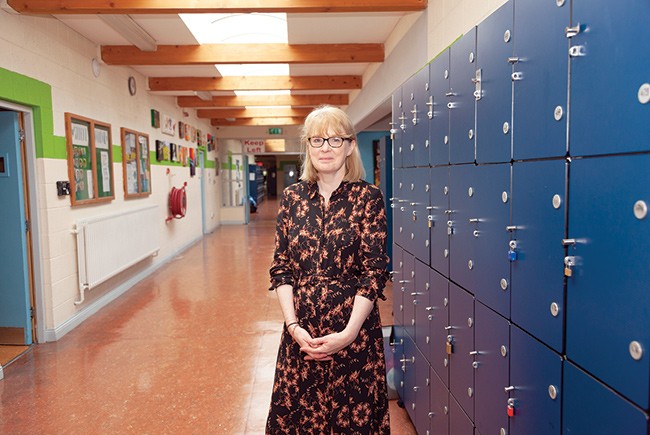 "Management is very good. It's a happy place to work," says Sheila Coyne.

Challenging but rewarding: Teaching in Ireland

While desirable, teaching in Ireland has gotten tougher, with starting salaries still at pre-2008 levels.

Unlike many new teachers in Ireland, Kathryn Freney has a full-time job in her chosen profession. She teaches Irish at Colaiste Cholmcille, a 650-student school for 12- to 18-year-olds in a small town in north Ireland. She earns the equivalent of about $41,045 before taxes, has a union pension and gets summers off with pay.

“I’m one of the lucky ones,” she says. “Today, a lot of teachers can’t find full-time work.”

Freney says the key to getting hired was her expertise in Gaeilge, the Irish language. Ireland’s secondary schools face a shortage of teachers in Irish, a mandatory subject, and an oversupply in other areas such as history and English, according to the Teaching Council, a professional regulatory body. “Many of my friends are hopping from job to job” as substitute or part-time teachers, she says. “Thankfully, I have full hours and a steady income.”

Teaching in Ireland traditionally has been seen as a desirable career, with enough pay to live on, job security and work-life balance. The academic credentials of new teachers in Ireland are among the highest in the world. But making a living at teaching has gotten tougher in recent years. Starting salaries are lower than before the global economic downturn of 2008-09, and new applicants face stricter qualification requirements.

A few years ago, Ireland extended its teacher education program from a one- year diploma to a two-year professional master’s degree. The program follows a three- or four-year undergraduate degree and costs up to $13,500, meaning becoming a teacher can take as much time and money as becoming a doctor — with no guarantee of landing a full-time job.

Freney grew up in Mayo County along Ireland’s west coast. Her father worked as a technician for a phone company, and her mother was a homemaker. Freney, the second oldest of four children, did well enough in school to earn a spot at University College Dublin. After getting her bachelor’s degree in history and Irish, she enrolled in the education master’s program at National University of Ireland in Galway.

“I don’t remember everything I was taught by my teachers. There were some subjects I absolutely hated, but I loved my teachers,” she says. “I think it was the role a teacher can have in a student’s life that made me want to go into teaching.”

She adds that teaching had always been a “well-respected job in our house, and it was within my means. I could get a loan and put aside two years to study to become a teacher.”

Freney lived at home with her family, took a full course load and worked as a student teacher in a local school. Upon completion of the master’s program, she moved to Donegal County in northwest Ireland to teach full time at Colaiste Cholmcille.

Freney now makes about $2,633 a month after taxes. “For me, that’s enough,” she says. She lives a 40-minute drive from the school, in an inexpensive apartment. She finds her workload challenging but rewarding. “Not many people can say they like their job,” she says. “I love my job. I really, really enjoy it.”

Colaiste Cholmcille draws students from a number of primary schools in and around Ballyshannon, a riverside town of nearly 3,000. A recent report by Ireland’s education department rates the school’s quality of teaching and learning as “good to very good” and describes the campus as well maintained, with “many displays of student work and celebrations of their achievements exhibited on school corridors.”

The typical student comes from a two-parent, Catholic family. Teachers report spending relatively little time on discipline, and they say they try to be positive and encourage communication when behavior issues arise.

“We have a small percentage of difficult students, but they’re very much in the minority,” says Sheila Coyne, who teaches English and religion at Colaiste Cholmcille. “Rather than coming down heavy on discipline, we try to get the students to look at their behavior — it’s not a personal thing — and consider the consequences.”

Coyne, a teacher for the past 33 years, chooses to work part time. She thinks she might retire in two years — or earlier “depending on what kind of day I’m having,” she says.

“Our students are the digital natives, and we’re the ones trying to keep up with them,” Coyne says. “You have to use different strategies to keep them engaged. Gone are the days of ‘chalk and talk.’ ”

The school system is financed almost exclusively by the central government (with local funds as supplements), which cover the building and maintenance of schools; teacher salaries; teacher education and professional development; and the majority of school transportation costs. Most teachers in Ireland are federal employees and part of a union. The national government prescribes curricula; local school management committees, which include parents, hire teachers and maintain school facilities. Ireland requires new teachers to have a master’s degree in education. The average high school teacher with 15 years of experience makes $60,053 a year before taxes. The average elementary school class has 25 students.

Ireland requires children to attend school from age 6 to 16, or until they complete three years of secondary education.

Primary schools generally are state-funded but privately owned by religious communities or other local organizations.

Secondary education consists of a three-year “junior cycle” followed by a two- or three-year “senior cycle.” During the last two years, students are tracked into one of three programs, each leading to a national exit exam called the Leaving Cert. In addition to a traditional broad-based program, there are programs focused on vocational education and applied learning.

Read more in our June issue.