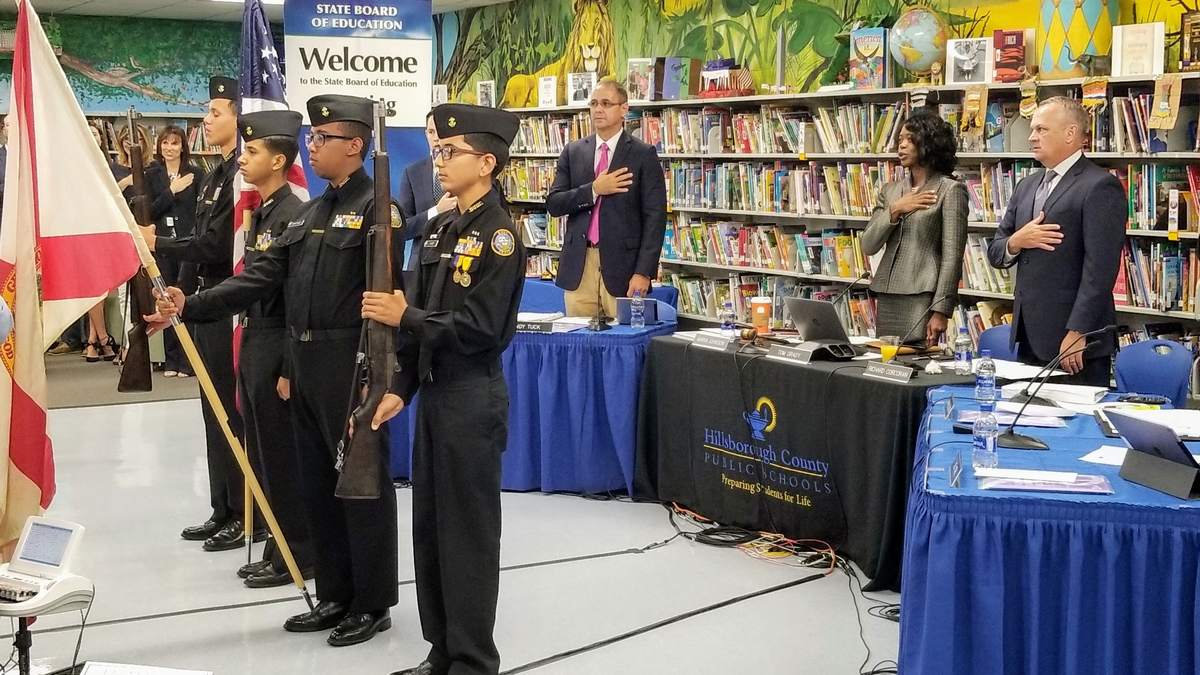 The Freedom High School color guard opened the Florida Board of Education meeting May 22, 2019, at Mort Elementary in Tampa. [Jeffrey S. Solochek | Times]
< >

“We will find ways to hold these districts accountable," Corcoran told the State Board of Education during its meeting at Mort Elementary School in Tampa.

That could mean never approving the districts’ turnaround plans required in state accountability law, he suggested, or asking lawmakers to grant the Department of Education emergency powers to step in when districts refuse to comply.

“What do you do when you have a district that has 21 schools in D or F and on the verge of constant turnaround? In turnaround, out of turnaround. You’re talking about generations of kids,” the former House speaker explained after the meeting. “At what point do you say, ‘Maybe we should put them in receivership, maybe we should have legislation that allows us to go over there and take over.’”

Board members, all Rick Scott appointees, immediately voiced their support for the idea.

The issue arose as Corcoran grew irritated with a presentation about the turnaround plans for Duval County’s lowest performing schools on annual state exams.

After hearing a report about the continued low results from K-12 chancellor Jacob Oliva, Olenick homed in on the fact that Duval district officials had canceled or rescheduled several meetings with state officials over the course of a year, even as few improvements emerged. He questioned the district’s commitment as it rebuffed state assistance and review.

Grady suggested the district had demonstrated it could not handle managing turnaround plans itself, and put forth that the board might consider revoking those approved plans in favor of some other approach.

Duval superintendent Diana Greene told the board that she was committed to working with the state, but that she also had to devise plans acceptable to her community. She laid out a vision for improvements that some on the board called "bold."

Grady was nonplussed, saying he wanted to see results, and not just receive promises of positivity and collaboration. He signaled a willingness to wait and see.

Corcoran was not so charitable. He blistered Greene for what he called a “travesty of justice” for children who deserve better.

The commissioner repeatedly asked the superintendent why she had not stepped forward to adopt a “Schools of Hope” charter operator, IDEA Academy, as an outside operator for the most struggling schools that Greene said still do not look likely to improve their state grades.

Corcoran championed the “Schools of Hope” program, which eases the path for state-approved charter school providers to open in high-poverty communities, while House speaker.

Duval should “go aggressively in another direction,” Corcoran said, adding, “Are you afraid of the competition?”

Greene, visibly annoyed, pushed back. She said her district had 40 charter schools already, and that the community did not prefer IDEA. She added that she had been in her current job for only 10 months, and had seen enough to know in her professional judgment that the schools can improve without taking the step that Corcoran advocated.

“I have seen what is going on in the school district,” she said. “It has the ability to turn it around.”

Board members and the commissioner noted that they did not have the authority to force the district to accept a charter. Some observers in the audience speculated that they seemed to be posturing for a move to seek that power.

Less than an hour later, Corcoran made his statement.

He said he believed that students deserve no less than a singular focus on their academic needs. How could Duval’s plan to close some schools and rebuild others in a $2 billion construction project save kids, he wondered.

“I want you to find a parent in this state and go up to them and say, ‘Is it all right if we put your child in school and fail them for three years in a row?’ They’ll go, ‘No.’ How about two years in a row? No. How about one year? No. They won’t accept it for one single year,” Corcoran said after the meeting. “But these kids. ... They’ve had 15 straight years at one school. It’s just completely and utterly unacceptable.”

If such authority were granted, it would not be completely without precedent.

This spring, the Legislature effectively ousted the board of trustees for Florida Virtual School and handed the role to the State Board of Education. Two years ago, the State Board mandated a turnaround plan for Jefferson County schools that led to a charter school takeover of the entire three-school district.