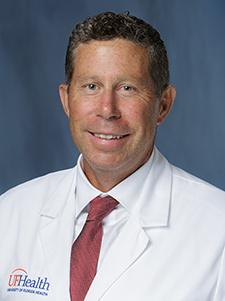 For nearly a year, Nelson — also a professor of medicine, assistant vice president for research and director of the UF Clinical and Translational Science Institute, or CTSI — has done an admirable job as the interim in this important role, Fuchs said, and has impressed faculty, staff and students alike with his ability to ensure the university’s research, teaching and patient care missions have continued to move forward on their upward trajectory.

“Dr. Nelson is a highly respected and remarkably talented physician, researcher, scholar and educator — all qualities that make him the right leader for UF Health at a key moment in its trajectory,” Fuchs said. “With him at the helm, I am confident that UF Health in Gainesville, Jacksonville and throughout the state will accelerate its rise as one of the most exceptional and influential academic health centers in the Southeast and beyond.”

In recent months, he has already begun to hold important and collaborative conversations with key leaders at the health system and the university aimed at strategically positioning the system for smart growth; enhancing operations; supporting faculty, staff and students; and fostering a diverse, inclusive and equitable community. He also has continued to explore ways to optimize the speed of the translation of research, bringing science to the bedside and to the community to improve patient care for individuals and populations.

At the same time, Nelson continued this past year to direct the UF CTSI, which he has led since 2010. The CTSI has served as a catalytic hub for translational science at UF, throughout the state and across the country. The CTSI has received two National Institutes of Health Clinical and Translational Science Awards totaling more than $42 million since 2009, and he helped drive the institute’s mission to speed the translation of scientific discoveries into better health by transforming the university’s ability to advance research across a wide range of disciplines, diseases and populations.

“I am honored to continue to serve this great university and its health system in this important position in support of our stellar faculty, staff and students who work so hard every day to advance our missions of high-impact research, outstanding education and top-quality patient care,” Nelson said. “I am looking forward to fostering an environment that helps people connect and collaborate, whether it’s around translational, interdisciplinary research, the training of the health care practitioners of tomorrow or the introduction of clinical innovations that will improve patients’ lives.”

In total, Nelson — who with his wife, UF Health anesthesiologist Jill Freedman, raised their two sons in Gainesville after they were born at UF Health Shands Hospital — has spent 26 years working at UF’s academic health center. An expert in liver disease, his research has generated more than $80 million in funding and he has authored more than 200 publications. He has held multiple leadership roles in his area of expertise, co-authoring the U.S. treatment guidelines for hepatitis C and representing the United States on the World Health Organization HCV guidelines committee. As a principal investigator on basic science, translational research and training grants, he co-leads an international hepatitis C research network and oversees multiple ongoing clinical trials.

In 2013, he was recognized for one of the Clinical Research Forum’s Top 10 Clinical Research Achievements related to his clinical trials work on hepatitis C; in 2014, he received the Association of American Medical Colleges’ Learning Health System Research Champion Award; and in 2018, he received the FDA’s Regulatory Science Excellence Honor Award. He has continuously been recognized as one of America’s top physicians/gastroenterologists and has been the recipient of multiple exemplary teaching awards, an outstanding alumnus award from his medical school, a UF Research Foundation Professorship Award and a UF Term Professorship Award.

Nelson received his undergraduate degree from Dartmouth College and his medical degree from SUNY Upstate University in Syracuse, New York. He completed a residency in internal medicine at the University of Massachusetts and completed fellowship training in gastroenterology and hepatology at UF.

“The university will greatly benefit from his insights and thoughtful leadership,” Fuchs said in an announcement to faculty, staff and students.