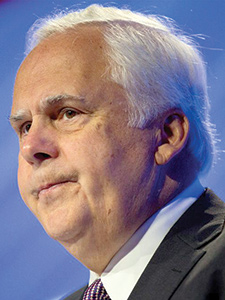 “In several years of operations in Florida and elsewhere, FedEx drivers have told us repeatedly that they find them to be more stable,” FedEx Chairman and CEO Fred Smith told the U.S. House of Representatives’ Committee on Transportation and Infrastructure in February 2017.

Opponents contend that longer trucks are inherently more dangerous and do more damage to road surfaces.

But the fight over twin 33s is really a transportation turf war — opponents include full-truckload shippers fighting the twin 33 legislation because they fear ceding market share to less-than-truckload shippers, especially since full truckload shippers don’t want to invest in new trailers that would only help them with a fraction of their business.

The most intense opposition, though, comes from railroads, which fear losing business to bigger trucks with more shipping capacity. Jacksonville-based CSX has warned investors of the threat posed by longer or heavier trucks. “Any future … legislation providing for less stringent size or weight restrictions on trucks could negatively impact the company’s competitive position,” CSX says in regulatory filings.

The battle, heavily organized, has been going on for more than half a decade now. FedEx, UPS and Amazon have formed a group dubbed Americans for Modern Transportation, while the railroads have set up the Coalition Against Bigger Trucks. Both sides have financed research to support their position and have recruited law-enforcement and highway-safety advocates as allies.

Last year, FedEx and UPS signed on as sponsors of a three-day States and Nation Policy Summit in Washington, D.C., that was organized by the American Legislative Exchange Council (ALEC). In turn, the conservative, Koch-backed lobbying group approved a resolution in favor of twin 33s. “ALEC urges Congress of the United States to modernize trucking equipment standards and allow twin 33-foot trailers on American highways to replace the past federal standard of 28-foot trailers,” the group announced.

Meanwhile, in February of this year — a few weeks after Florida eased its own restrictions and permitted longer trailers on local roads — railroads sent a letter to every member of Congress. “As the 116th Congress considers solutions for repairing and improving the nation’s transportation infrastructure, we urge you to oppose any legislation that would increase maximum truck size or weight limits on federal highways,” they wrote.

The railroads even warned against allowing states to set their own rules. “We also urge you,” they wrote, “to oppose legislative language that would allow bigger trucks in individual states, including any ‘pilot programs.’ ”

For all the talk of needed infrastructure spending, the deep partisan divide in Congress means few expect the issue will reach a definitive resolution anytime soon.