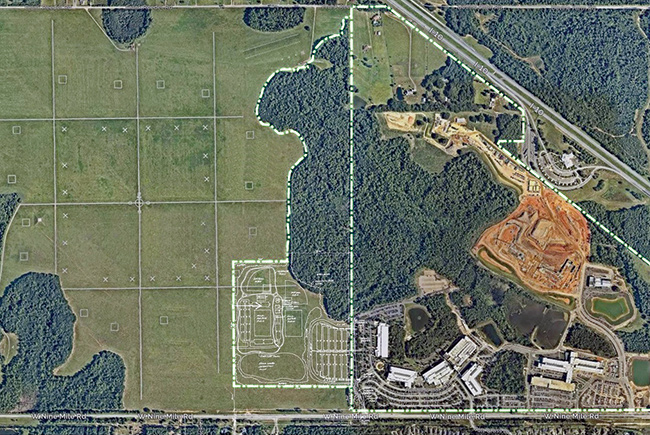 The land was formerly owned by the Department of Defense.

Formerly owned by the Department of Defense, the land was used for decades as a helicopter training field. Over the past five years, Escambia County has spent more than $17 million to buy the land, with the understanding that it will build a new, similar-sized helicopter training field to replace the previous one. Current appraisals value the 1-square-mile site at $28 million to $32 million.

Meanwhile, the site, also known as OLF 8, is attracting private interest. In January, Hemmer Consulting of Pensacola and 68 Ventures of Spanish Fort, Ala., offered Escambia County commissioners $18 million for 536 of the 636 acres. Navy Federal is offering $4.2 million for 100 acres.

Navy Federal spokesman Bill Pearson says the 100 acres are critical to the credit union’s master plan for its rapidly growing $1.2-billion campus. If the sale is approved, Navy Federal says it will add 300 jobs to its 7,000-employee workforce, Pearson says.

Escambia County Commissioner Jeff Bergosh, whose district includes the site, has said the 300 Navy Federal jobs would help the county reach its goal of creating 1,000 jobs at the OLF 8 site.

The Toyota Foundation has named the Pensacola- based Florida Institute for Human and Machine Cognition a finalist in the $4-million global Mobility Unlimited Challenge. The five finalists, chosen from 80 international entries, include teams from Japan, Italy, the United Kingdom and two from the U.S. The winner will be awarded $1 million in 2020 in Tokyo.

“We’ll be building a new device, and it will involve considerable hardware development,” says Neuhaus. “We’ll be leveraging software, tools and algorithms for balance that we’ve developed in our robotics program.”

IHMC is partnering with Myolyn, a medical technology company based in Gainesville.

Do you approve or disapprove of how Ron DeSantis is handling his job as Florida's governor?