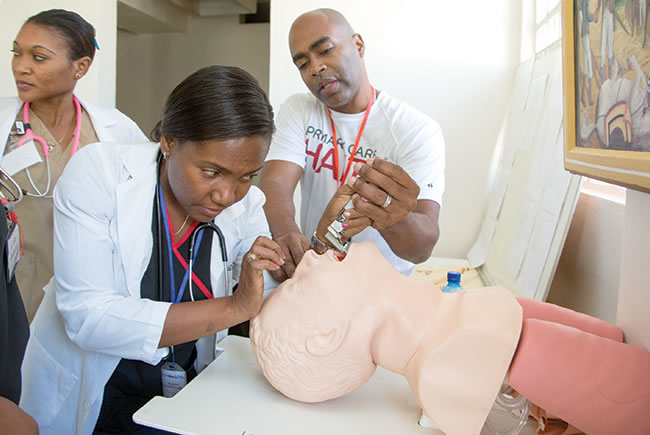 Broward family physician Jennifer Goldman and her husband, Haiti-born emergency medicine physician Kissinger Goldman, volunteered regularly to fly to Haiti to provide medical help to the island’s residents. In the process, they saw limitations to the revolving-door approach used by the non-profits that serve the country: Set up a clinic, fly in a host of well-intentioned people to see hundreds of patients, and then fly them out.

“Unfortunately, it hasn’t made an impact,” Jennifer Goldman says. “If it had worked, then Haiti would probably have the best health care system in the world with all the non-profit attention.”

Two years ago, the Goldmans — doctors with the Memorial Healthcare System in Broward — founded their own non-profit, Primary Care Haiti, with a different model. They focus on providing low-cost, innovative equipment suitable for Haiti’s conditions and then offer free training for locals in rural areas in how to use it and in how to pass along the training.

Their initial target was cervical cancer screening. Pap smears are a “logistical nightmare” in a country with only a few pathologists to read them, Jennifer Goldman says. The Goldmans found success with smartphone-based gear that allows the providers they train — doctors, midwives and others — to spot pre-cancerous cells and remove them immediately.

At the behest of locals, the non-profit now also trains Haitians in ultrasound, cardiac care, pediatrics and even hospital management. “Our model is we provide what is needed by the local health care organization,” says Kissinger Goldman. “The success we’ve had over the past couple years has been tremendous. You’re making real change by giving people tools they need to succeed.”

AVIATION Gulfstream Aerospace plans a 115,000-sq.-ft. maintenance, repair and overhaul facility to replace its smaller center at Palm Beach International Airport. The facility is scheduled to open in 2020.

TECHNOLOGY Computer users with less than 20/20 vision may have problems if they use goggles rather than a video screen. Plantation-based augmented reality company Magic Leap has signed a deal to have Austin-based Frames Direct provide $250 prescription lenses for its $2,000 goggles. FPL is seeking regulatory approval to offer a “solar subscription” to customers. Those who subscribe incur higher bills to underwrite the addition of more solar power generation, then receive discounted bills in later years.

PHILANTHROPY Locally based retailer City Furniture pledged to donate at least 5% of annual profit to Florida charities as it expands statewide. In November, it donated $1 million to launch the capital campaign for Covenant House of Florida, which helps the homeless and at-risk youth.

REAL ESTATE National Realty Investment Advisors and U.S. Construction began sales of 19-unit Ocean Delray, the first oceanfront residential development in Delray Beach in more than 30 years. Units start at nearly $5 million. The smallest unit is 3,300 square feet. Completion is scheduled for 2020. The building replaces the old Wright by the Sea Hotel. Boynton Beach tore down its city hall to make way for a $250-million town hall square with a new municipal building, library, hotel, performance space and residential. Port St. Lucie remains stuck with the former office-and-lab home of failed bioresearch recruit VGTI after a would-be buyer said there was no market for the space locally. VGTI’s demise in 2015 left the city with the building and the $64-million debt it took on to build it. BRP Senior Housing Management acquired a 15-acre Delray Beach site, at Jog and Flavor Pict roads, for its planned 279-unit senior living rental resort project. Construction begins in the summer, with an opening slated for 2021.

Colliers International South Florida expanded its Palm Beach footprint by acquiring West Palm Beach-based Michael Falk & Co. under brokers Michael Falk and Scott Weprin. Investors Warranty of America’s headquarters site in Delray Beach — a 43-acre property that Office Depot vacated a decade ago to move to Boca Raton — was sold for $33 million to three developers who plan a residential, office and retail development. Centerpointe Delray Holdings, a partnership of Miami-based 13th Floor Investments, Key International and Boca-based CDS International Holdings wants to build more than 600 apartments and townhouses. CDS, which separately owned the Arbors office building at the site, will build retail and office space. The developers plan a 1.8-acre park connecting to the 25-acre Delray Natural Oaks Preserve. The city hopes the project will transform the Congress Avenue area around the site.

The company recently raised $1.65 million, its second fund-raising round, and has raised a total of $3.15 million. As of late December, Tippy terminals were in 60 salons. Salons pay a monthly subscription fee in return for software and support and the Tippy kiosk for customer use.

In tests, tips increased an average of 30%, according to the company. President and CEO David Tashjian says there’s been a “tremendous response from the industry.”

Fast-ferry operator Balearia Caribbean replaced its ferry that runs four times a week between Broward seaport Port Everglades and Freeport on Grand Bahama with a faster, 35- knot, 600-passenger boat it says will be able to make the run in 2½ hours.