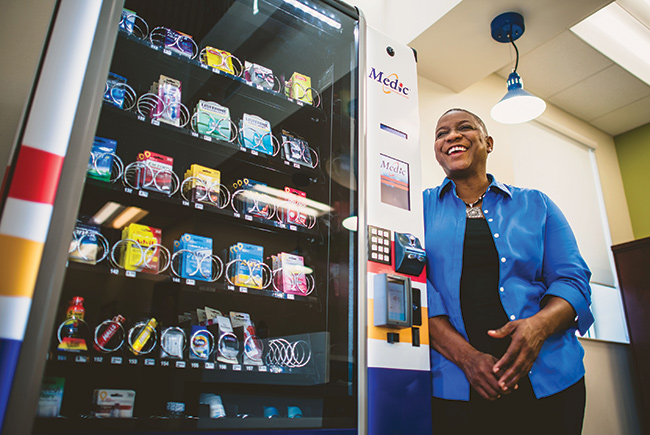 Garlene Atcherson launched Medic, which sells over-the-counter drugs in 2016. "Sometimes you just need to take medicine and get back to work," she says. 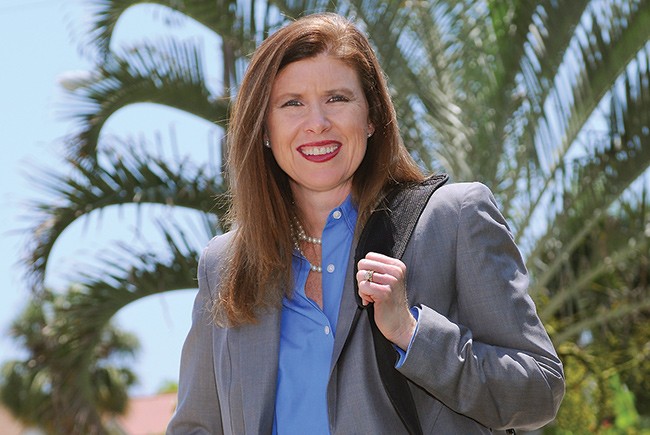 Bailey, mother of four, has authored numerous books on marketing to moms, including her latest, "Millenial Moms: 202 Facts Marketers Need to Know to Build Brands and Drive Sales." 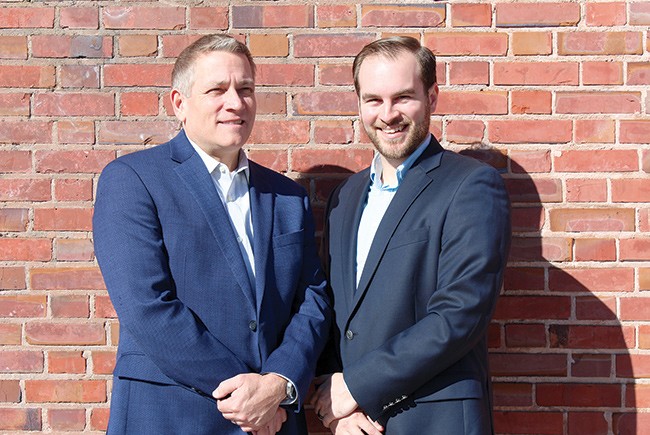 Tim Shoop, left, and Brian Wilkey of Digital Boardwalk expect to have $6 million in revenue by 2021.
< >

On her morning drive to her pharmacy job, Garlene Atcherson heard an advertisement for a vending machine. The ad triggered an idea: Why not sell over-the-counter medicines in vending machines? She ran the idea by two friends — pharmacists Michelle Birt and Joel Rivera. The three talked about the concept for months and then, in early 2016, launched a business. Their Jacksonville startup, known as Medic, places vending machines that sell pharmaceutical products and personal care items in office buildings, gyms and other venues. “Sometimes you need to go home when you’re sick, but sometimes you just need to take medicine and get back to work,” Atcherson says.

In the last two years, Medic has landed deals to put its vending machines at Florida Blue and YMCA locations around Jacksonville, among other locations. The machines feature touch screens that detail drug facts and product ingredients but also allow for an additional revenue stream — on-screen advertising.

Medic now has 13 large vending machines in Jacksonville. As the company ramped up its operations, it realized it could also install smaller machines, Atcherson says, and plans to launch a “wall unit” version by the spring.

“We own all the machines, so it doesn’t cost a business anything but wifiand electricity,” Birt says. The company restocks the machines but plans to hire a servicing company once it expands outside of Jacksonville. Medic’s goal for 2019 is to have 30 machines in Jacksonville by year end, attract advertising revenue and turn a profit.

Medic, which operates out of offices at the Beaver Street Enterprise Center, a business incubator in northwest Jacksonville, has enjoyed the center’s below-market leasing rates and conference space as it grew. “It has been inspiring to watch Medic’s business grow, and I’m confident of their success,” says Theresa Johnson, Beaver Street Enterprise Center director. “They placed their very first vending machine in our lobby, and it was a hit.”

Maria Bailey was pondering her next career move in 1999 when she noticed that few companies marketed effectively to her demographic — mothers. Seeing opportunity, she not only wrote a book called “Marketing to Moms,” but also began to offer consulting services to companies on how to target moms and their purchasing power. Today, her marketing and media business has 11 employees.

One of BSM’s recent clients, HP (Hewlett- Packard), hired the firm to create focus groups with mothers and tweens. Participants in the focus group provided feedback on a new product and then served as social influencers to get people to buy HP’s new product. “HP saved money on its innovation expense and gained the marketing benefit from using these influencers,” Bailey says.

Companies such as Disney, Chick-fil-A, Beaches Resorts and Build-A-Bear have turned to BSM for its research on mom trends, national network of mothers, branding expertise, marketing-plan execution and knowledge of how to use social media to connect brands with mothers. But mom business owners say they have benefited from BSM, too. “They have helped me connect my personal brand with top-notch companies,” says mom blogger/video host Cindy Simmons.

Bailey says her initial goal was $1 million in sales, but the company actually took in twice that amount. “We now have the infrastructure of a larger business, including a 401(k).”

In November, after many years of helping brands launch products, Bailey started a spinoff called Popped Passion (poppedpassion.com). The company’s popcorn cakes are made of candy and popcorn and customized with team colors, company logos or holiday designs. “It grew out of my love of popcorn,” Bailey says. The company launched in time for college and professional football playoffs. After appearing on a news segment prior to the SEC college football championship game, Popped Passion received more than 200 orders. In addition, BSM’s network of mothers placed hundreds of holiday orders.

What started as a hobby — making temperature controllers for grills and smokers for friends — has turned into a business for two Orlando brothers. Roger and Michael Collins are marketing their Flame Boss device as a “cruise control for grills and smokers” to specialty retailers who sell it as an accessory. “People that sell smokers know how to sell our product,” Roger says.

The device clips onto grills or smokers and adjusts the heat with a blower that switches on and off based on readings from a thermometer inserted into the meat. The Collinses say it eliminates the need to babysit an outdoor cooker. WiFi capability gives users the ability to control the cooking temperature remotely using an app.

The brothers launched their company five years ago in a business incubator at University of Central Florida, benefiting from networking with other entrepreneurs and gaining access to potential vendors. “We spent time with them guiding them through where they were going, but they built the company,” says Rick Parks, site manager of the UCF incubator in Apopka. “They have completely dominated their market.”

In 2018, the company landed the Big Green Egg as a co-branded business partner and signed Home Depot to sell Flame Boss devices online. The company also added a simpler, $219 option along with its original $349 version. “We believe that will make a big difference,” says Michael, who handles company finances.

Late last year, the Collinses and their 20 employees moved out of the incubator into their own 15,000-sq.-ft. facility, where they assemble, package and sell the Flame Boss.

The company had revenue of more than $3.2 million in 2018 and is on track to reach $5 million this year, Michael says. That growth landed Flame Boss on the 2018 GrowFlorida list of companies to watch.