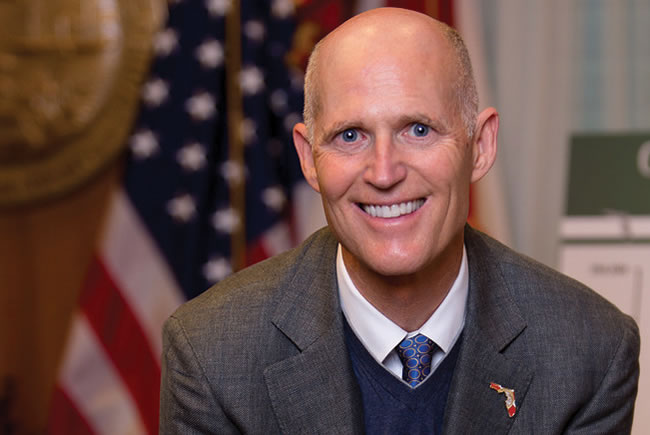 Rick Scott never once earned a majority of the vote from Floridians during his campaigns for governor. He survived each of his races by the slimmest of margins — 1.2 percentage points in 2010 and 1 percentage point in 2014. In the governor’s chair, Scott, the former HCA chief executive who had never before served in public office, didn’t take an expansive approach to the job, instead concentrating narrowly on a handful of core priorities and then focusing on them with the sort of discipline that few, if any, other Florida politicians have ever displayed. Scott, who has parlayed his governorship into a seat in the U.S. Senate, leaves behind a far stronger legacy than many expected.

Here’s where Scott had the biggest impacts on Florida:

From the very beginning, the selfstyled “jobs governor,” who was elected when Florida’s housing-dependent economy was in ruins, made privatesector job creation and economic growth the chief focus of his administration. While there is plenty of debate about how much influence governors have over the economy, there is no arguing that Florida rebounded during Scott’s tenure. The state’s unemployment rate today, for instance, is 3.4%, down from 10.5% when he took office. Scott pulled every lever at his disposal, from tax cuts (many targeted specifically for businesses, such as a bigger corporate income tax exemption, eliminating the sales tax on manufacturing machinery and reducing the sales tax on commercial lease payments), to speeding up licensing and permitting processes (the Scott administration says it cut more than 5,200 regulations) to pumping more money into economic- development incentives and industry subsidies (such as tourism advertising). And he was a relentless salesman for the state, leading trade missions and recruiting trips around the country and the world, personally calling corporate executives to sing Florida’s praises and attending ribbon-cutting and businessexpansion announcements statewide. He even showed up for the opening of Wawa convenience stores.

Scott made his fortune managing health care businesses and, in many respects, he took a CEO’s approach to governing Florida when it came to the state’s balance sheet. While he tried to drive growth through private-sector capital investment and job creation, he also devoted a great deal of attention to curbing Florida’s potential expenses and liabilities. During his administration, for instance, Florida paid down more than $10 billion in debt and reduced its total debt load by 25%. The state repaid loans to the federal government it took out during the recession to cover unemployment claims. The Florida Hurricane Catastrophe Fund, which provides subsidized reinsurance to insurers, improved its financial position by $10 billion by accumulating cash reserves and reducing its own exposure. And state-backed Citizens Property Insurance Corp. shed nearly 1 million policies — roughly two-thirds of its total — and reduced its estimated exposure to a 1-in-100-year storm from more than $21 billion to less than $6 billion.

Markets have noticed. In June, Moody’s upgraded Florida’s credit rating. Its report read like Scott himself would have written it, with the company citing “a sustained trend of improvement in Florida’s economy and finances, low state debt and pension ratios and reduced near-term liability risks via the state-run insurance campaigns.”

In the short term, that path meant not using historically low interest rates of the last few years to borrow more and make infrastructure investments. Meanwhile, as Citizens reduced its rolls — to smaller, untested private insurers — some homeowners who are paying more for their insurance were left feeling uneasy. But Scott’s fiscal discipline has left a lot more freedom to the state’s future leaders. “Ron DeSantis enters the governor’s mansion with a lot of options he might not otherwise have had if the Legislature and the governor had gone out and put everything on the credit card,” says one lawmaker who has worked closely with Scott.

Although Scott only got to make one Supreme Court appointment during his eight years, he significantly remade the judicial composition of the state’s courts, aggressively vetting potential appointees and evaluating them through a narrow philosophical prism. “He said, ‘I want people who will follow the rules, respect the rule of law and serve with humility,’ ” says a former attorney in the governor’s office. Put another way, the governor sought out judges who are far less likely to deem laws unconstitutional or restrain executive authority. Scott also extended the vetting and litmus testing to the state’s Judicial Nominating Commissions — the nine-member panels made up of five direct gubernatorial appointees and four appointees the governor makes from nominees submitted by the Florida Bar, who winnow the overall pool of judicial applicants into a small group of finalists from which the governor must choose. In fact, Scott became the first Florida governor to begin rejecting entire groups of JNC nominees from the Bar, forcing the organization to come up with more names until the governor found enough to his liking. “We spent as much time vetting JNCs as we did judges,” the former governor’s office attorney says.

Altogether, Scott appointed hundreds of judges around the state — including more than half of the judges on the state’s five District Courts of Appeal, which together decide far more cases than the Supreme Court. Scott only got one Supreme Court pick (Justice Alan Lawson), but he got to pick nine of the 13 judges on the state’s second-most important court: The 1st District Court of Appeal, which includes Tallahassee and hears many cases involving regulatory agencies. Notably, not one of the more than 30 appellate judges Scott appointed is black.