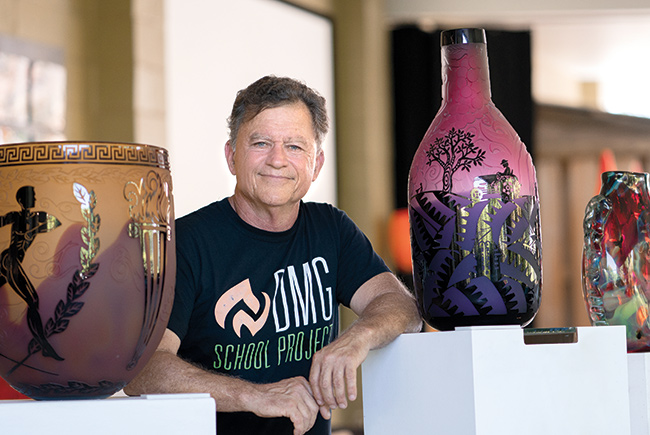 Duncan McClellan is a ‘Florida Icon'

Business was ingrained in me at an early age. When I was a kid, I’d save my money and when we’d go on a family trip to New York, I’d buy fireworks, take them home to Florida — where you couldn’t get fireworks then — and sell them for triple the price.

I grew up in Orlando, pre-Disney World. I’m guessing I was about 6 and my dad, who worked in PR and advertising, was hired to keep it quiet that Disney was buying up land. It was the opposite of what he usually did, which was to publicize, but they had to keep it quiet or they would never have amassed the land they needed to build what they wanted to build. So, one Sunday, Walt Disney comes to our house for dinner. I have seven brothers and sisters, and we were sworn to secrecy. Can you imagine, Sunday dinner, and then you run to the TV and you see the guy who just ate dinner in your house — and you can’t tell anybody!

It wasn’t until I was 30 that I had my first chance to blow glass. I had worked in clay. I worked in wood. I worked in leather, and I even had a candle business at one point. But when I had my first opportunity to blow glass, I found it very addicting. Every kid is a pyromaniac, and when you see this molten, honey-like glass, and the fire and smoke, all of it, it’s just intoxicating.

God bless her, my mom was a very interesting person, but you could go in the refrigerator and there could be a science experiment or there might be papier-mâché in the kitchen blender because she was always doing some kind of art thing. My mom was a terrible cook, so I started working in restaurants when I was about 12.

Florida has such a mix of people, which is what makes Florida interesting.

I used to have a Rudolph nose because I’m short, and I’m leaning in close, shaping these big, hot vessels, and I’m this far from a charred nose.

This was the late 1950s, and we were living in New York. The whole family was depressed, and so dad and mom took all of us kids and themselves to the doctor, and the doctor said we needed more light — move to Arizona or move to Florida. And dad went ‘OK,’ and he sold his advertising agency in two weeks, and we moved to Florida.

I know the power of art. Art can change neighborhoods for the better.

Mentoring is really important to me. When I first started, I didn’t have a place to blow glass. But now I can provide space for other artists to work. That’s my mission.

I happen to like red a lot, so I blow a lot of red vessels. If you want to sell in Florida, it has to be brighter colors, because it’s the way people perceive light. They don’t want gray and brown in houses down here. They want teal. They want yellow. They want pink.

Last week, I decided that we needed to get bees to pollinate our plants. I’ve already bought the hives, and I’m painting them all. I’ve always had an interest in farming. I love growing things.

We used to blow glass all year round, and we’d basically throw up between pieces because of the Florida heat. You’d have to pour a hose over your head, cold water, because your head was splitting. At the end of the day, my black jeans would literally stand up by themselves when they dried because of the salt content. They’d go from black to kind of white.

I started my own gallery because I got cheated by two galleries in one week.

Advertising is one of the highest forms of art. What other art form do you know that when you look at it, you take out your wallet and trade your hard-earned dollars to buy the thing that’s being advertised? That’s powerful.

I grew up on Lake Brantley (near Orlando). We were the only house on the lake, so I grew up going to swamps and collecting snakes and that kind of thing. Can you imagine growing up where you had a whole lake to yourself? It was great.

We’re all a combination of the things that interested us since we were very small.

I don’t think the government is protecting our environment now. The evidence is the algae and the red tide.

I like projects. In fact, my wife is very scared because I’m running out of projects.

We had a group of artists and scientists here the other night and one of them said: ‘The way to double your success is triple your failures.’ I think that’s a brilliant statement. I hadn’t heard it before, but it makes perfect sense.

Read more in the December issue

Earth Day is April 22, so don't miss out on these events happening around the area.