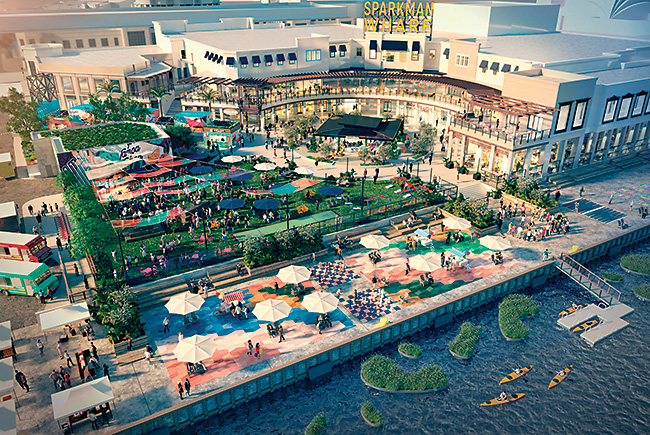 Sparkman Wharf will include restaurants and offices and a park-like lawn for recreation. 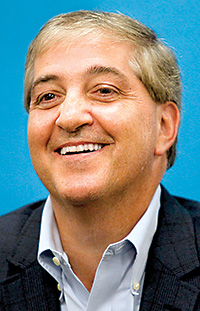 Of all the city builders remaking skylines around Florida, none is poised to have a more dramatic impact than Jeff Vinik with his $3-billion Water Street Tampa project.

The Tampa Bay Lightning owner and former hedge fund manager began by stitching together 17 blocks of property around the Amalie Arena on the southern edge of downtown Tampa. He brought on Cascade Investment, the personal wealth fund of Microsoft founder Bill Gates, as a co-investor. And then he assembled a team to plan and build it all.

What makes Vinik unique is that he plans to continue owning it all even after it is built. Instead of selling parcels off, one by one to separate developers, the land in the 50-acre project will remain controlled long term by Strategic Property Partners, the development firm founded by Vinik and Gates’ Cascade Investment.

“It’s changed our way of thinking,” says James Nozar, SPP’s CEO, whom Vinik recruited from JBG Smith in Washington, D.C. “We’re focusing on the long-term viability, sustainability and vibrancy of the neighborhood.”

That long-term focus, Nozar says, has affected decisions big and small at Water Street Tampa. For instance, the company will try to award prime, ground-floor corner leases for restaurants or cafes or other retail uses that may pay less in rent than banks but drive more foot traffic and help “activate” the overall development.

Water Street’s plans also include buildings that Nozar says are “a little more challenging and would not be financeable in a traditional market,” but he won’t say which ones. “We’re looking at those buildings as more of an amenity to the greater whole, an investment in the greater whole,” he says.

SPP says it has broken ground on four of the 11 buildings that comprise Water Street’s first phase. That includes a 519- room JW Marriott hotel; a two-tower residential building with 420 units built atop a full-service grocery store; Sparkman Wharf, a collection of “culinary destinations” and creative office space in Tampa’s former Channelside Bay Plaza entertainment complex; and a central, chilled-water cooling plant that will provide air conditioning to dozens of buildings and free up tower rooftops for terraces, restaurants, parks and solar panels.

SPP is also nearly finished with a sweeping renovation of the 727-room Marriott Waterside hotel. And while technically separate from the project, the University of South Florida is midway through building a medical school that is tied into Water Street Tampa; it will open next year.

The remaining seven buildings in the first phase — which include a five-star Edition hotel by Marriott and the first two “trophy” office towers to be built in downtown Tampa in more than 25 years — are expected to begin construction between December and March, Nozar says.

Altogether, including the Marriott Waterside renovations, Water Street Tampa’s first phase includes roughly 4 million square feet of new development, divided roughly in thirds between hotel, office and residential space. That’s about half of the overall project. SPP expects to do design work in 2019 and 2020 for the project’s second phase, with buildings constructed according to demand.

“We see it being much more fluid after phase one,” Nozar says. “The goal here is to create a lot of critical mass right off the bat.

“This is a massive, complicated project — something of a scale that few of us have ever seen,” he adds. “So we’re all learning along the way — the city is, our team is, the owners are, our neighbors are.”

It’s been a rough year for food and beverage vendors who normally make money at big events year-round. With COVID-19, many of those events have been canceled. It’s why the Firestone Grand Prix was an exciting and welcoming time for businesses that haven’t been able to serve their normal customer base.