Florida enjoys a strategic geographic location. And that position in the world, combined with state-of-the art, multimodal infrastructure, a multilingual workforce and a heavy concentration of corporate and financial resources, facilitates a ready flow of people, goods and services over oceans and across international borders to and from the Sunshine State.

International Trade
In 2017, goods valued at $147.7 billion entered or exited the United States through Florida’s two U.S. Customs Districts. Widely recognized as a global hub for the Western Hemisphere, Florida accounts for 31% of U.S. trade with Latin America and the Caribbean.

Florida is home to 60,000 exporting companies — second only to California — and the nation’s second largest Foreign Trade Zone network with 21 facilities. One of every five U.S. companies that exports is located in Florida.

Florida ranks 8th in the nation in state-origin exports (i.e., commodities actually produced, or with significant value-added, in the state). In 2017, those exports totaled $55.1 billion. Brazil, Canada and Mexico were the top three recipient countries with civilian aircraft, engines and parts leading the list.

Foreign Direct Investment
Thanks to its booming economy (4th largest in the U.S. and 17th largest in the world if Florida were a nation), stable business environment and multinational workforce, Florida is a leader in attracting foreign direct investment, ranking 4th among all U.S. states in employment by majority foreign-owned firms. Miami has become a leading U.S. center for international banking with both foreign and domestic financial institutions eager to establish a presence here. To facilitate FDI, Florida’s EB-5 Regional Centers offer foreigners the opportunity to obtain permanent U.S. residency while investing in Florida through the EB-5 Investor Visa program.

Florida’s population is both multiethnic and multilingual. A full 20% of the state’s population is foreign-born, and 28% of households speak a language other than English at home. 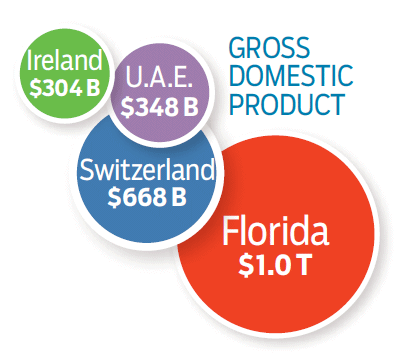