A number of competitive seats statewide could set the tone nationally.

A number of competitive seats statewide could set the tone nationally. 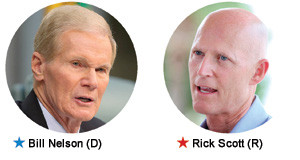 The race at the top of the ticket in Florida this year is also one of the most important elections in the country. U.S. Sen. Bill Nelson, the last remaining Democrat holding statewide office in Florida, faces the toughest challenge of his political career from Republican Gov. Rick Scott. The race highlights the challenge that Democrats face nationally; they need to pick up two seats to win a majority in the U.S. Senate, but they also need to defend incumbent seats like Nelson’s in Florida, which went for Trump in 2016.

Nelson is an institution in Florida, where he has held elected office almost continually since 1972, including as a state legislator, U.S. House member, state treasurer and insurance commissioner and, for the past 18 years, U.S. senator. He’s built a reputation as a non-controversial moderate who often seems to inspire more antipathy among liberal activists than conservative ones.

Scott has spent a fortune — much of it his own — building his brand in Florida, and he’s every bit as well known to voters as Nelson is. Scott has also been preparing for this race for several years, taking steps to soften the hard-right image he initially campaigned on. He’s embraced more centrist policies such as raises for public school teachers, in-state university tuition for the children of undocumented immigrants and, after the Parkland school shootings, raising the legal age to purchase firearms to 21.

If Scott succeeds in ousting Nelson, the odds are very good that the Republican Party will retain control of the U.S. Senate. 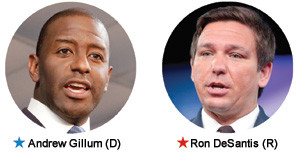 There’s no sharper contrast on the ballot this year than the race for governor, where the Republican, U.S. Rep. Ron De- Santis, is a hard-line conservative and Donald Trump devotee, and the Democrat, Tallahassee Mayor Andrew Gillum, is an aggressive liberal and a favorite of the Bernie Sanders crowd. Trump’s endorsement singlehandedly propelled DeSantis to victory in the GOP primary over Agriculture Commissioner Adam Putnam, while Gillum, unlike many moderate Democrats who tiptoe around the subject, advocates for impeaching the president. But the election will have profound policy implications for Florida. DeSantis, a member of the House freedom caucus, can be expected to govern even more conservatively than outgoing Gov. Rick Scott, with promises to continue deregulating education and health care and imposing stricter immigration controls like E-Verify. Gillum, meanwhile, supports Medicare for all, wants to raise corporate income taxes and lift starting teacher salaries to $50,000 a year. With a state Senate that is becoming more evenly split, a hard-charging partisan governor will have a real opportunity to tilt the direction of the state. And there are some big decisions looming for the next governor that are beyond the Legislature’s control, including potentially appointing three new Florida Supreme Court justices and deciding whether to sign or veto new congressional district maps that will have to be drawn following the 2020 Census. 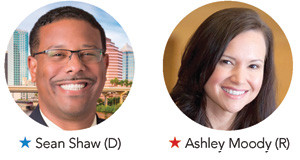 After the governor, the attorney general is the most important state-level office in Florida, with broad powers to protect consumers and regulate industry and to throw the weight of Florida into important legal battles affecting everything from health care to LGBTQ rights. Republican Ashley Moody, a former circuit judge and federal prosecutor from Tampa, emphasizes criminal justice priorities, with pledges to support police, enforce immigration laws and target gangs. Democrat Sean Shaw, a Tampa attorney who represents policyholders against insurance companies and a state representative, pledges to strengthen the office’s role as a consumer watchdog in investigating and litigating complaints against businesses accused of unscrupulous practices. 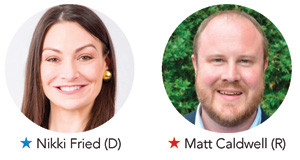 Both candidates, Republican Matt Caldwell and Democrat Nikki Fried, break the traditional, 10-gallon-hat-toting mold of a candidate for an office whose responsibilities extend far beyond farming concerns to everything from issuing concealed weapon permits to regulating auto mechanics, travel agents and telemarketers. Caldwell, a real estate appraiser from Lehigh Acres, has served in the state House since 2010, where he has played a leading role in major water-policy debates in recent years. Fried, a Fort Lauderdale attorney and lobbyist, says she would use the office’s powers to expand access to medical marijuana and advocate for farming of industrial hemp. Caldwell, who says government intrusion is the No. 1 obstacle to small-business success, would pull back on the office’s regulatory work. Fried says she would make the office a more active enforcer of consumer protections. 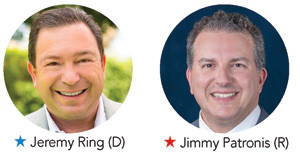 The sleepiest of Florida’s statewide races pits quasi-incumbent Republican Jimmy Patronis, who was appointed to the post in 2017 by Gov. Rick Scott and now faces his first election, against Democrat Jeremy Ring. Patronis, a restaurateur from Panama City, spent eight years as a rank-and-file representative in the state House but has since risen to prominence on the strength of his position as an innercircle ally of Scott, who appointed him to the Public Service Commission and the Constitution Revision Commission before handing him a Cabinet seat. In his brief tenure as CFO, an office whose duties also include serving as Florida’s fire marshal, Patronis has advocated for expanded workers’ comp benefits for first responders and streamlining regulations for insurance claims adjusters. Ring, a former Yahoo executive, is a moderate Democrat who has generally been popular with the state’s Republican-leaning business community. A former state senator, Ring is best known for championing state funding and policies that support startups and entrepreneurs and that encourage commercialization of university research.