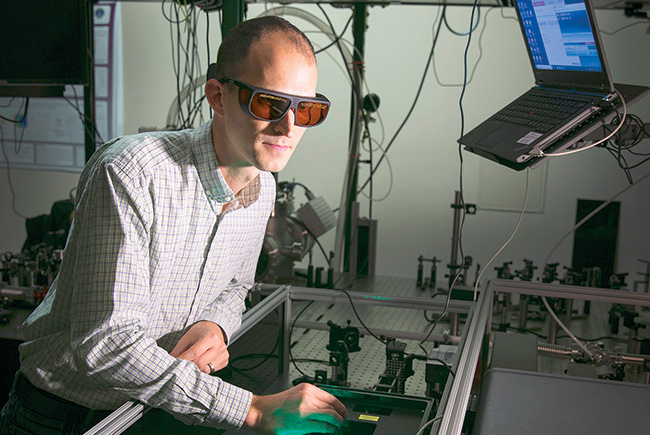 Michael Chini will study the potential for using short, intense laser bursts to form or break atomic bonds within a molecule.

If young scientists were ranked like young quarterbacks, Michael Chini would be a top prospect.

Chini, 33, earned a bachelor’s degree in physics from Canada’s McGill University in 2007 and then a Ph.D. in physics from the University of Central Florida five years later. Now he’s an assistant professor in UCF’s physics department who has started down the tenure track.

Two years ago, the U.S. Air Force awarded Chini a research grant worth more than $450,000 through its Young Investigator Program, which is designed to support early career scientists and engineers who show promise. This summer, he was one of 54 university researchers around the nation awarded U.S. Department of Energy grants through the agency’s Office of Science Early Career Research Program.

With the grant — $150,000 a year for the next five years — Chini will study the potential for using short, intense laser bursts to form or break atomic bonds within a molecule. The goal is to develop enough control over these ultra-fast reactions to be able to capture and harness that energy for other uses.

This is the ninth year for the Department of Energy’s Early Career Research Program, which is designed to support researchers at a time when they are doing their most formative research. To be eligible, researchers must be an untenured, tenure-track assistant or associate professor at a U.S. academic institution or a full-time employee at a DOE national laboratory and have earned a Ph.D. within the past 10 years. The research topics must fall into one of six categories: Advanced scientific computing research; biological and environmental research; basic energy sciences; fusion energy sciences; high energy physics; or nuclear physics.

Pinellas County teacher shares what it's like teaching while history is being made.

At the beginning of the year, Kaitlin was nervous. With a Masters in Education, she was prepared to teach the kids, but dealing with a pandemic was something new for everyone. She went into to this experience wanting to do everything she could to keep her students safe and now she feels like she's found her groove.