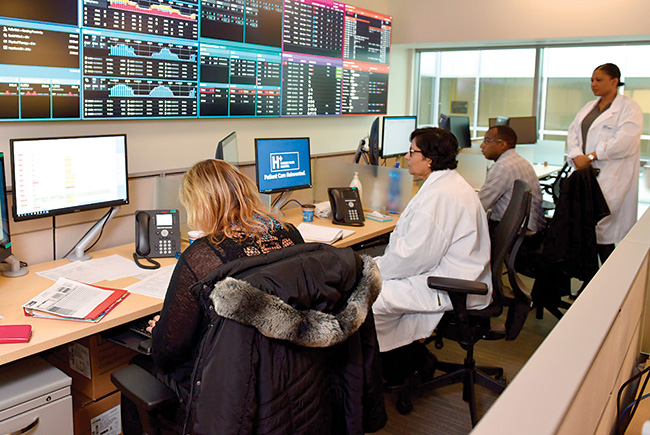 A center similar to one already being used at Humber River Hospital in Toronto will reduce patient wait times and speed up the discharge process.

Tampa General Hospital is partnering with GE Healthcare to create a 9,000-sq.- ft. patient-care coordination center that will use predictive analytics to improve and streamline the hospital’s patient-care process. For example, the system will examine data in order to reduce wait times for patients, transport patients around the hospital more efficiently and speed up the hospital-discharge process.

The center, expected to be operational by next year, will also help manage risk and balance the staff’s workload. Similar systems are in place at Johns Hopkins Hospital in Baltimore and Humber River Hospital in Toronto.

“We want to leverage this system to improve efficiency and shorten the time patients are in the hospital by better managing their care,” says John Couris, president and CEO of Tampa General. “This technology will help to reach our goal of providing coordinated patient care after they leave the hospital.”

Business Briefs and People in the News for Southwest Florida

Entertainment venue Ruth Eckerd Hall is undergoing a $21-million renovation. The work will include expanding the lobby, a new dining area and other improvements.

Tech Data has a new CEO. Rich Hume, a former IBM executive, replaced Robert Dutkowsky, who had been CEO since 2006 and will stay on as executive chairman. Dave Goodwin, St. Petersburg’s director of planning and economic development, has retired. His responsibilities will be taken on by Alan DeLisle, the city’s development administrator, and Liz Abernethy, director of planning and construction services. The University of South Florida has a new athletic director, Michael Kelly, a former COO of the College Football Playoff. He replaces Mark Harlan, who left USF to be the athletic director at the University of Utah.

Stepping Up Its Presence

Mosaic, the Fortune 500 phosphate mining company with a huge presence in Florida, is moving its headquarters from Plymouth, Minn., where it employs 150, to Hillsborough County. The company, one of the world’s largest producers of fertilizer, employs 3,000 people in Florida and controls about 290,000 acres in Hillsborough, Polk, Hardee and DeSoto counties. Mosaic also developed the Streamsong Resort in Bowling Green, which features three golf courses built on former phosphate mines.

The Seminole Hard Rock Hotel and Casino is undergoing a $700-million expansion. The work includes a 15-story hotel and an additional 200,000 square feet of gaming space.