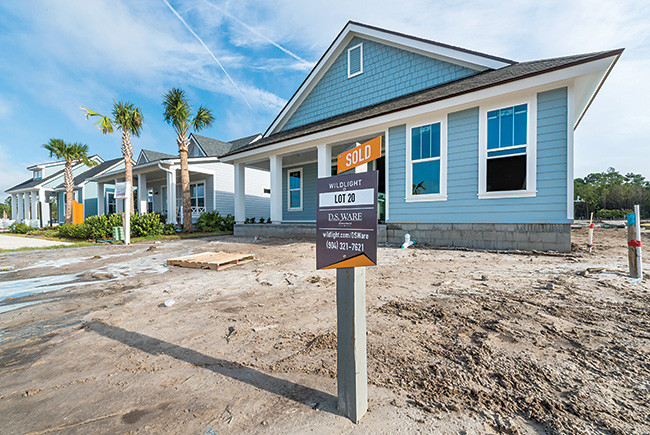 Rayonier has closed on about $7.5 million worth of sales in Wildlight through the end of March. Phase one will include about 600 single-family homes, 280 apartments and 500,000 square feet of commercial space. 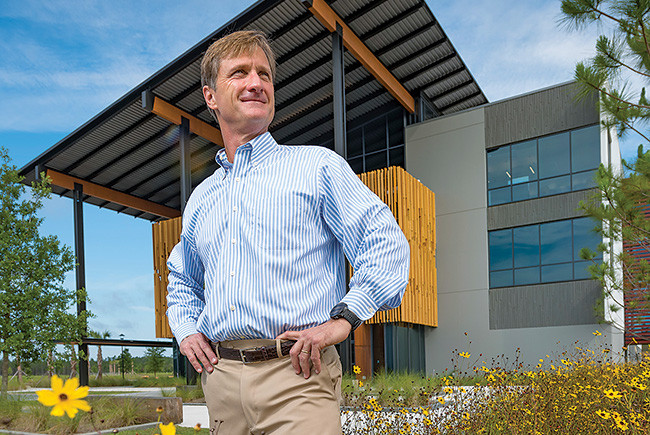 Chris Corr’s experience at Disney and St. Joe “made him really well-qualified for the position. He is creative and talented and brought a different mindset to the company.” — Former Gov. Jeb Bush 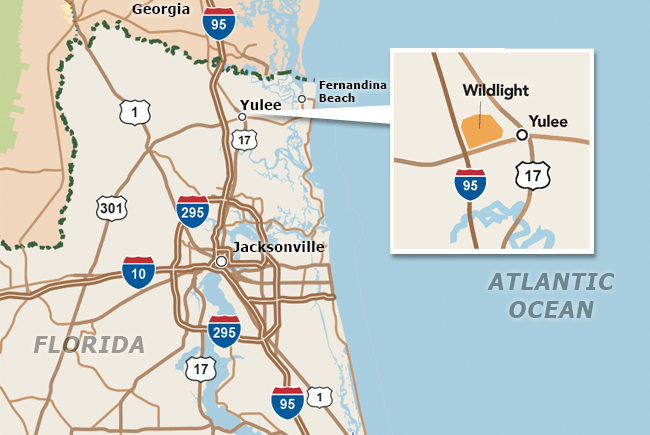 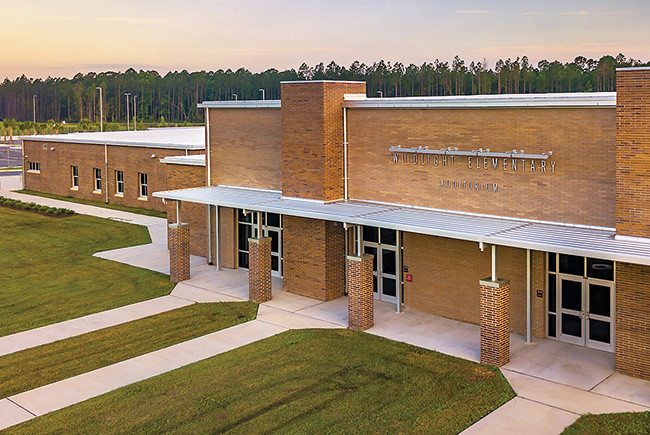 The first thing built in Wildlight was an elementary school, located on land that Rayonier donated at the center of the development. UF Health plans to build a health care campus at Wildlight, and Florida Public Utilities is planning a facility there. 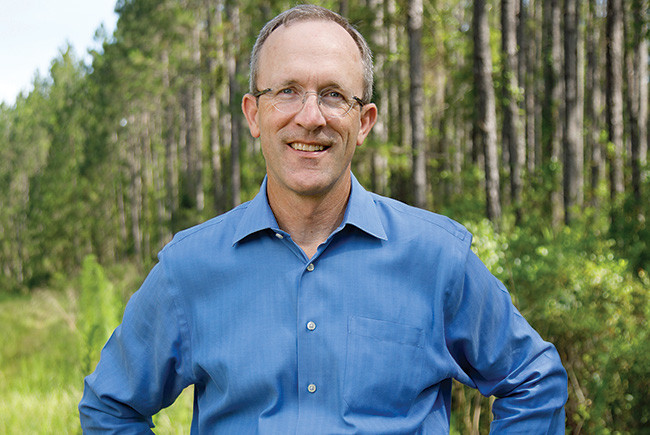 Rayonier President and CEO Dave Nunes, who joined the company in mid-2014, told an investors group that the company is moving to “catalyze” its property in Northeast Florida. 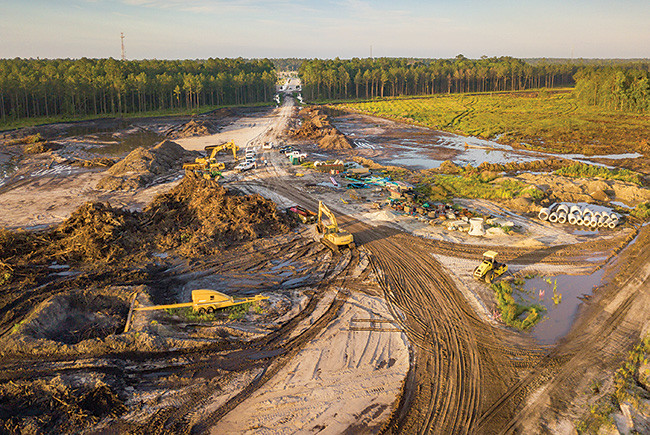 Rayonier ultimately plans to spend between $50 million and $60 million on Wildlight — its biggest development effort.

Harvesting rooftops: Rayonier is in the development business

The timber and real estate company envisions its 261-acre Wildlight project as the beginning of something bigger — it owns another 25,000 acres within fi ve miles of the project.

In early 2013, Chris Corr was looking for a job. Corr, 54, comes from a long line of developers. His grandfather moved his family to Florida almost 70 years ago from Michigan and began developing the community of Apollo Beach on nearly 6,000 acres on Tampa Bay. His father finished building it; one of the community’s schools, Thomas P. Corr Elementary, is named after him.

In 1992, Walt Disney Co. hired Chris Corr to help plan and develop Celebration, Disney’s master-planned community in Osceola County. Six years later, he went to St. Joe Co., where, as chief strategy officer, he oversaw the development of some of the company’s timber holdings in Northwest Florida, including the creation of Northwest Beaches International Airport.

In between, he served a term as a Republican member of the Florida House of Representatives and landed a series of political appointments, including seats on the 1997-98 Constitution Revision Commission and the University of Florida’s board of trustees.

The housing collapse of 2008 forced St. Joe to eliminate Corr’s position. He landed at AECOM, the global consulting giant, but had been itching to get back into the real estate game. As 2012 turned into 2013, he got his chance: A company — Corr won’t say which one — with land to develop offered him a job.

Among those he called to ask for advice was former Gov. Jeb Bush. After listening to Corr describe the opportunity, Bush threw Corr a curveball. “What about Rayonier?” asked Bush, then serving on the company’s board of directors. “You should pay attention to them.”

Based 10 miles from the Georgia border in the northeast corner of the state, Rayonier is one of the largest land owners in the United States — and one of the largest private landowners in Florida. The company owns or leases more than 1.8 million acres of timberland across the Southeast, including 350,000 acres in Florida. About 200,000 acres of the firm’s holdings lie along the fast-growing I-95 corridor between Daytona Beach and Savannah, Ga.

With real estate markets beginning to flicker back to life, Rayonier management had decided that the company could make more money harvesting rooftops rather than timber.

Rayonier, like most large timber companies, has always done some development in areas where urban growth sprawled toward its forests. Historically, the company has sold off between 1% and 1.5% of its holdings a year, using some of the proceeds to replenish its timber stock with cheaper land elsewhere and pocketing the rest as a premium. But the overall approach was fairly unsophisticated — the company mostly Rayonier spent $13 million to build a striking 55,000-sq.-ft. corporate headquarters in Wildlight, moving 150 employees. just sold off big tracts of raw land.

“Generally, when you have a large chunk of land, no one wants to pay you a premium for it,” says Rayonier President and CEO Dave Nunes, who joined the company in mid-2014.

To unlock more value from its land, Rayonier knew it had to begin investing more to prep it for development. To identify exactly where it should focus, Corr and a small team of Rayonier employees and consultants began studying Rayonier’s coastal land, evaluating sites for things like market readiness and land attributes.

Rayonier eventually identified a handful of sites. One was near Savannah, where the company had some 20,000 acres of roughly contiguous land around I-95 and a nearby industrial park already in the works.

Another was in Nassau County, where Rayonier is the county’s largest private landowner, with more than 100,000 acres.

Nassau had several advantages. The state was planning to expand the interchange at I-95 and AIA and widen AIA. The company already had done a preliminary sector plan that covered roughly 25,000 acres in the area.

And while most of Jacksonville’s growth has historically been to the south and into affluent St. Johns County, growth was beginning to turn north; Nassau County’s share of the total building permits issued each year for the Jacksonville metropolitan area has roughly doubled since 2012.

“A couple of years from now, or five years or 10 years, that growth has to go north,” Nunes says. “And it has to go through us.”