Florida has a pattern of cutting spending on public health

In the fall of 2016, as public health officials raced to contain the spread of the mosquito-borne Zika virus in South Florida, Gov. Rick Scott announced that he had authorized $25 million in emergency funding for vaccine development and advanced testing methods.

The virus, which can cause birth defects in unborn children, had become a major news story around the state. And Scott, who was already quietly planning a 2018 run for U.S. Senate, was eager to contrast the action of his administration against the inaction of Congress.

“I have traveled multiple times to Washington this year to meet with congressional leaders to tell them how urgent this need is. Yet, despite endless claims of support from those within both parties, nothing has been done,” Scott said at the time. “Every minute that passes that Congress doesn’t approve funding means more time is lost from researching this virus. For the sake of our state’s future children, this is time we cannot afford to waste.” 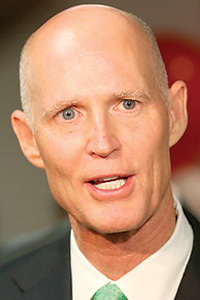 The Scott administration ultimately awarded 34 grants in all, divided among universities and private research entities around the state. But this spring, just one year after issuing the grants, Scott and the Legislature eliminated them.

Much of the research that Scott trumpeted in the fall of 2016 was simply never completed. At Florida State University, for instance, a team that had just made a breakthrough discovery — dealing with which parts of a cell that Zika activates — suddenly lost the money to test how the findings impact transmission of the virus. Some researchers at the University of Florida — whose projects ranged from developing rapid-detection technologies to identifying possible anti-viral therapies from existing drugs — wound up with only about nine months of what they had been told would be three years of funding.

Public health advocates say the elimination of the Zika research grants is part of a broader pattern in Florida, where Scott and the Florida Legislature have made deep cuts to public health programs around the state, save only for rare — and brief — spikes whenever some issue like Zika suddenly grabs the public’s attention.

“The problem with public health is that if public health succeeds and no diseases occur, then the standard reaction is, ‘Oh well, we don’t need it anymore,’ ” says Glenn Morris, director of the Emerging Pathogens Institute at the University of Florida. “And so there has been a tendency to, if we’re not seeing an outbreak of something, ‘Oh we’ll cut that funding.’ ”

The cuts have been especially severe at the county health department level, which advocates say used to be the front lines for everything from disease detection to indigent care. 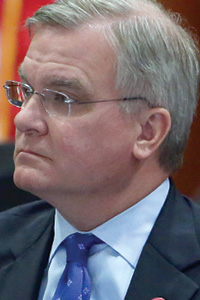 A separate study, by Chintan Bhatt, a researcher in Florida International University’s Robert Stempel College of Public Health and Social Work, found that the state cut its total spending on public health 35% between 2009 and 2015, when measured on a per capita basis.

State officials say some of the spending cuts are the result of simply eliminating positions that had long been vacant at county health departments around the state. But much of the shift has also been driven by the philosophical view of Scott, former CEO of for-profit hospital operator HCA and founder of the CareSpot (formerly Solantic) chain of walk-in urgent-care clinics, who has pushed to shift many formerly public services to the private sector.

The state, for instance, has stopped providing primary care services in many counties, deferring instead to privately run organizations.

While county health departments “have served as providers of primary care in the past, changing dynamics in health care have led to the opportunity to transition these services to other partners,” John Armstrong, Scott’s former secretary of the department of health, told state legislators during a 2016 budget debate, according to the Politico Florida website.

But public health advocates say the state cuts have had an impact. For instance, Bhatt, the FIU researcher who is also a board member at the Florida Public Health Association, suggests the cuts might have contributed to a rise in HIV infections in Florida, which has a higher infection rate than the U.S. as a whole. Bhatt says county health departments don’t have enough resources to carry out effective HIV prevention programs.

“Differences in HIV rates will not be changed unless an adequate level of funding is provided to support public health departments, statewide public health support services and disease prevention efforts,” Bhatt says.

What’s more, by cutting primary care services, the state also loses a window into the health of the public — and the ability to spot emerging trends and to get out front of potential breakouts, says Morris.

“It’s really shortsighted because the whole point of public health is, how do you prevent disease? You get to the highrisk populations. You get to the indigent populations,” Morris says. “You need to be able to monitor that. You need that basic provision of basic services to monitor what’s going on and to make sure that key programs continue, regardless of the vagaries of Medicaid and all that other stuff. This has clearly had a major impact.”