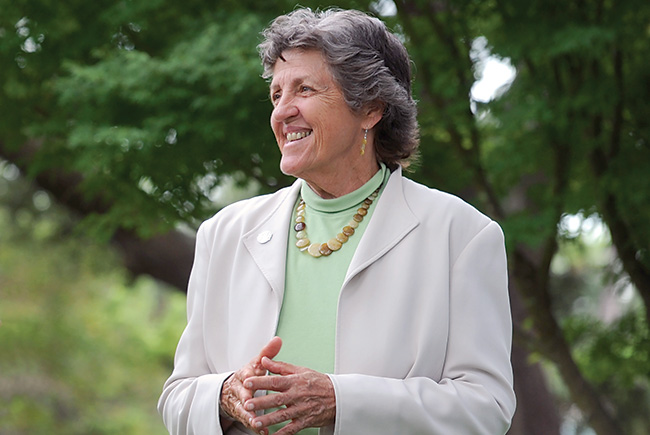 "We are a product of our past. The fact that we are an old historic city is part of the pride of Pensacola and Northwest Florida." ~ Judith A. Bense

I spend far too much money at Starbucks, but I can’t help it. I need my lattes.

We discovered Don Tristan de Luna’s shipwrecks from 1559 in eight to 10 feet of water in Pensacola Bay. People are fascinated by it, and they’re really curious. That’s what archaeology can give to the public.

Hard work — and being a finisher. That’s what I learned growing up on a dairy farm.

I had to put my archaeology aside. I couldn’t touch it. It was difficult. But I will tell you that being a university president is so distracting, the schedule is such a killer, that you don’t have time to think. I tried going to an archaeology meeting early in my presidency and it didn’t work. It made me miss it more. I just had to put up a wall.

My brother Allan is a former Speaker of the Florida House. Our mother was driven, just a real harddriving woman. And our father was a real nice guy. Everybody liked him. And so we have a combination. If you’re going to do something, go for it in spades and don’t give up. We got that from our mother. And yet we have a nice side, a friendly side, which gets people to like us and we like them. Maybe, that’s why we’ve both been so successful.

After I got into middle school, I began to get interested in archaeology through National Geographic, seeing pictures of mummies.

We did a lot of things at UWF. We built modern, fancy dorms. We built other buildings. We grew enrollment by 30%. The last thing I did was start football. And my God, football is just wonderful! It’s Division II, so I’m not rattling any other state university programs yet. We went to the national championship game last year. Football brings spirit, pride, cohesion, community relations. We play in a stadium downtown. It’s just a fantastic stadium right on Pensacola Bay. It has been magic. There’s something special about football in our culture and, as an anthropologist, I know it.

I made a very serious attempt to bring archaeology to the public, to have the public share in the discoveries and the techniques and the finds that we so much enjoy as professionals. I’ve also worked to bring Northwest Florida into the mainstream of Florida archaeology. Our sites are just as old.

Outside of work, I’ve really been enjoying for the last 15 to 20 years restoring our family farm back in Panama City with my brother Allan. We bought another farm in Chipley, and we have turned them into productive hay farms. We sell every blade of grass that we can produce. I like turning our farms into something that’s productive, not just something that’s pretty.

Pensacola is a very historic town. They were doing urban renewal in the early 1980s and improving utilities in the historic downtown area, and there were those who began to appeal to me as a professional archaeologist to help them because once you destroy an archaeological site and archaeological materials, you can’t put Humpty Dumpty back together again. Everybody knew we were a Colonial city, but they didn’t think there was anything left. But when I began to look, my gosh, there was stuff all over downtown, just a foot deep.

We don’t want to be Orlando, Miami or Tampa. We want to be what we are. What we kind of fear is the overdevelopment that has happened in the peninsula of Florida.

I thought I was doing just fine at UWF in 2006, setting up the Florida Public Archaeology Network, and maybe retiring in four or five years. But we had a president who left, and it left a vacuum. The reason they wanted me for the job, I think, was because they knew they could trust me. I wasn’t in it for the money. I wasn’t in it for the status. Opportunity only knocks once. A lot of things the university needed to do, I could do. One is visibility. I understood that we were the best-kept secret in higher education in Florida and we needed to grow and modernize. I said I’d do it for nine months. That turned into nine years.

Earth Day is April 22, so don't miss out on these events happening around the area.