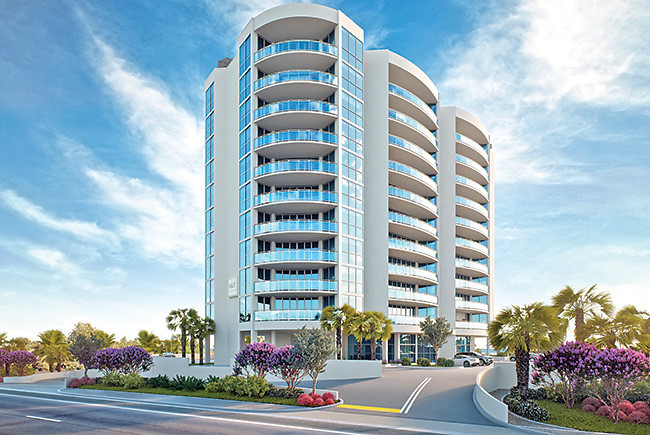 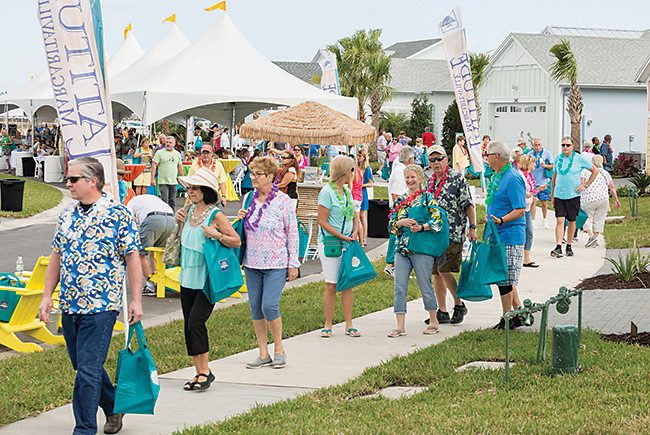 Latitude Margaritaville Daytona Beach, a new concept that is redefining active adult living, is selling homes in its first phase of 378 home sites. 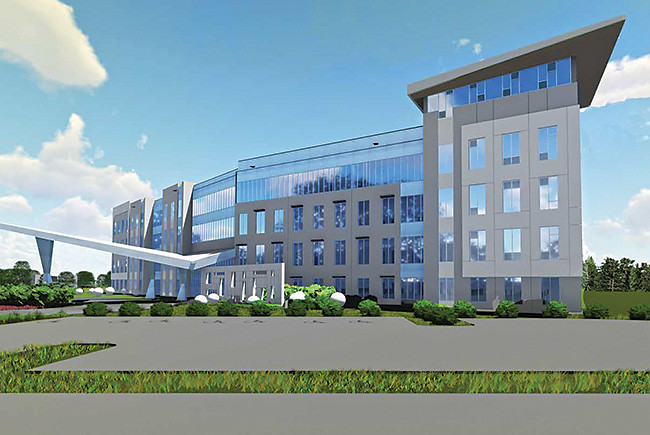 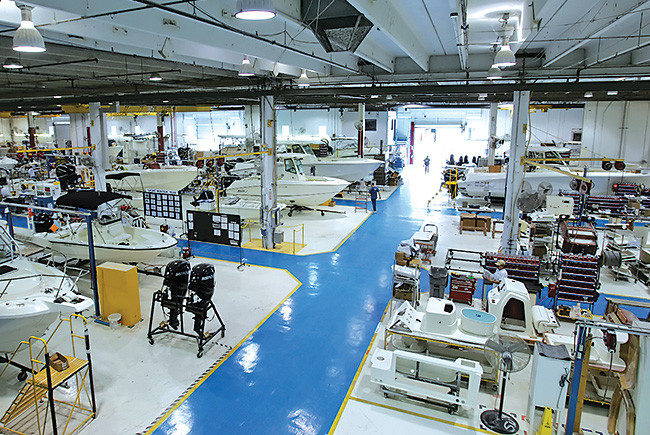 Boston Whaler continues to be a large part of southeast Volusia’s manufacturing sector, employing more than 900 salaried and hourly employees. 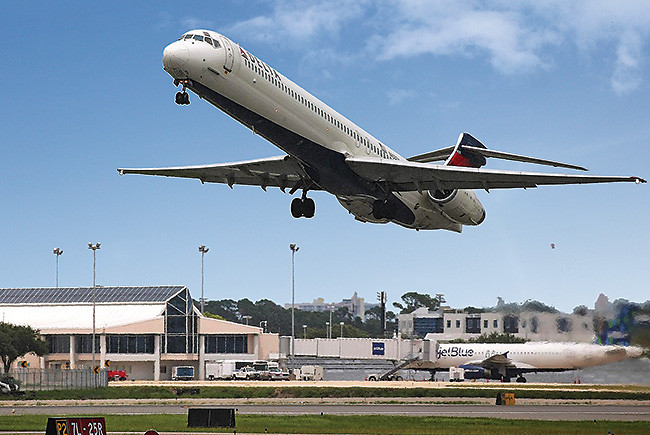 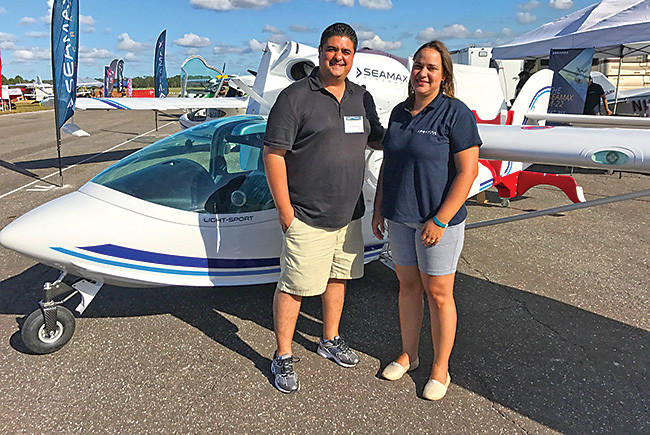 SeaMax Aviation executives were among the numerous exhibitors that took part in the annual DeLand Sport Aviation Showcase.
< >

Volusia County’s economic drivers are firing on all cylinders. Its traditional hospitality and tourism sector draws people into town for more than just a beach day. Home builders are creating communities where people are excited to buy new homes. Commercial construction thrives, and manufacturing has taken off with the help of an educated workforce. Meanwhile, enhanced transportation projects improve access to markets.

At the end of the Great Recession, Mori Hosseini, chairman and CEO of ICI Homes, a Volusia-based national home builder, watched as home building markets returned one by one across the state — everywhere but Volusia County. Even he held off from investing in his home turf.

Then in 2013, the owners of Daytona International Speedway decided to invest $400 million to rebuild the Speedway and another $120 - $150 million on an entertainment district across the street.

At the same time, Embry-Riddle Aeronautical University’s construction projects, which total some $315 million over the past five years, were also goosing the economy.

Those key decisions sparked an investment chain in Volusia County, kick-starting home building and commercial construction, says Hosseini. “For the first time in a long time we saw activity on the beach, with the construction and recent opening of the Hard Rock Hotel Daytona.”

The spark continues to grow.

After logging the strongest first quarter for new home starts since 2006, Volusia County homebuilders followed up with a fruitful April 2018 with 241 permits issued, the second most in a single month since June 2007.

“Construction is the gift that keeps on giving,” says Sandy Bishop, executive director of the Volusia Building Industry Association. “Every new home generates three full-time jobs, and every new home takes a vacant piece of dirt and turns it into a little economic machine.”

ICI Homes recently opened Mosaic in Daytona Beach, a 1,200-home “full life” community, selling 27 homes in the first 30 days. The company offers homebuyers a variety of choices in six communities in the area and plans to begin construction of model homes at Woodhaven, a 1,300-home community in Port Orange.

Dozens of builders and developers have large projects underway.

“One reason for a good part of this new success is we have very good government leaders in both the county and the cities.”

New buildings are also going up. Brown & Brown, the sixth largest insurance brokerage in the world, is building a 10-story, $30-million corporate headquarters in downtown Daytona Beach that will revitalize 10-plus acres of prime real estate, provide $35 million in new construction and land value, and generate approximately $8.7 million in construction related wages.

Consolidated-Tomoka Land Co. (CTO), a substantial land owner in Volusia County, has been hyperactive in the last few years. After building the LPGA project in 1993, it moved on to diversify beyond homes and golf courses. It sold land to Trader Joe’s for a distribution center in 2014. In 2015 CTO sold nearly 40 acres for the Tanger Outlet Centers for development of a 350,000-sq.-ft. outlet shopping center that opened in November 2016. And in 2017, CTO sold 1,586 acres to Minto Communities to develop Latitude Margaritaville.

With access to I-95 and a manufacturing-friendly environment, Volusia County has always been a good location for manufacturers ­— 450 and growing, according to Jayne Fifer, president/CEO, Volusia Manufacturers Association. Recently, many have expanded or announced plans to expand.

Daytona Beach International Airport is clocking increases in traffic as passengers discover the ease of flying into and out of the smaller airport that boasts service by three big carriers. American Airlines, Delta Air Lines and JetBlue Airways offer service to more than 90 destinations and daily nonstop service to New York City, Atlanta and Charlotte.

For the 12 months ending April 30, 2018, passenger traffic at DAB increased 4% with 730,341 total passengers traveling through the facility.

The steadily increasing traffic at DAB comes at a time when other airports in its class are experiencing flat or decreased traffic. Local and regional user-loyalty and preference over Orlando and Jacksonville airports play their part in the increase.

Airport renovation plans are in development; construction is expected to start by 2019. The terminal building is expected to get a makeover with a fresh look by the end of 2020.

SeaMax Aviation executives were among the numerous exhibitors that took part in the annual DeLand Sport Aviation Showcase that features the rapidly growing niche of sport aviation. At DeLand Municipal, Sport Aviation Village is the world center for parachute design and manufacturing for civilians and the military. More than two dozen companies employ 600 workers at the airport.
Pictured are Shalom Confessor de Aguiar do Amaral, director of International Business Development/USA, and his wife, Bruna Gratz do Amaral, SeaMax Aviation’s senior administrative and operations manager.

When David Slick of Command Medical Products moved his company from Ohio to Volusia County in 1986, he was a little worried the freight costs to deliver the medical devices his 130 employees manufacture in Ormond Beach would be non-competitive.

“In reality, it amounted to pennies,” says Slick, adding he never second guessed the decision again.

“We also have a major factory in Central America, and we can get products from here to there in a little less than a week. It’s very easy and cost effective.”

Transportation improvements to keep residents and businesses moving are ongoing across the region.

The Florida Department of Transportation spent $460 million for infrastructure in Volusia County from 2013 to 2017. In their upcoming 2018-2023 work cycle, FDOT plans to spend another $206 million. Ongoing projects such as the I-95 interchange improvement, which is widening the highway from four to six lanes, continue to move forward. That project is expected to be completed in 2019.

The Tom Staed Veterans Memorial Bridge across the Halifax River will be the first bridge in Florida with a concrete archway design. The $38-million project, replacing a drawbridge, will provide fishing piers and 28 scenic overlooks that depict past military conflicts to honor local veterans. The bridge is expected to be completed by 2019.

Volusia County Exports: $323 Million
The value of exports from the Deltona-Daytona Beach-Ormond Beach MSA has grown more than 20% from pre-recession levels.