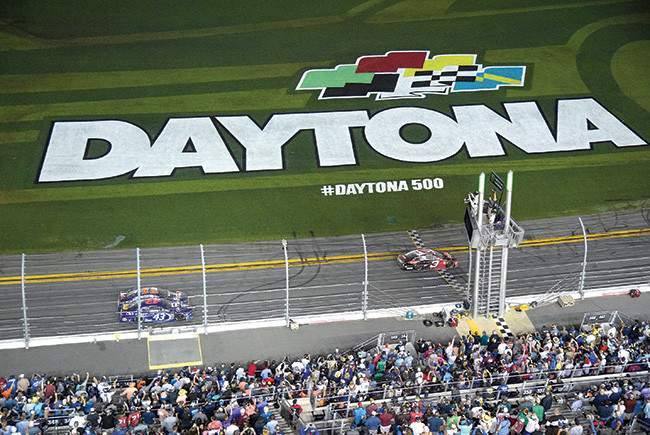 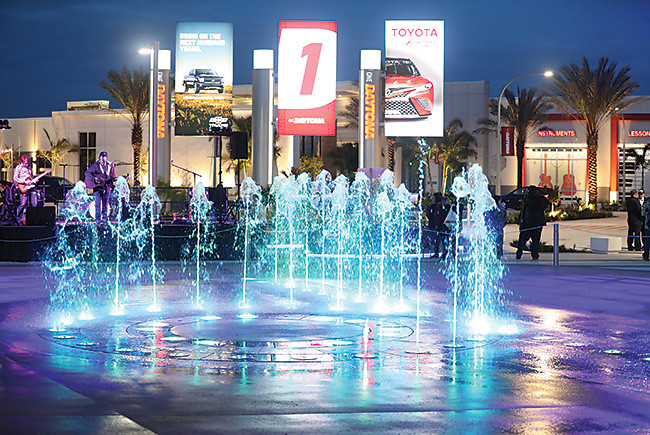 One Daytona includes 16,000 available square feet of Class-A office space for lease, and 276 multi-family residences are planned this year as well.
< >

The thrilling sound of engines revving to the red line and the 200-mph whoosh of super-charged race cars hasn’t changed at the iconic Daytona International Speedway. But the stadium itself has morphed like a Transformer character into an upscale venue on steroids after a $400-million re-imagining from July 2013 to January 2016.

The new stadium is bigger — nearly a mile long — so long that the design had to account for the seven-inch curvature of the earth over the distance. The interior space is large enough to allow social spaces in the front stretch area called “neighborhoods” each the size of a football field with sight-line design and dozens of video screens to catch the action.

Comfort for fans was a targeted improvement. More track-side suites were added, and seating in the stadium got more comfortable when some 101,500 stadium seats were outfitted with back and arm rests and super-sized cup holders.

The rebuild also added considerable bump-ups in convenience, doubling the number of restrooms and tripling the number of concessions and merchandise points of sale. And with 1,400 TV screens showing the track action, you don’t miss a thing while picking up a snack.

The Speedway transformation, dubbed Daytona Rising, was an economic driver of its own, creating 6,300 jobs during construction and paying wages totaling more than $300 million. Governments were enriched as well with $85 million in new tax revenue during construction.

Total economic benefits continue after construction with a $1.6 billion total economic benefit to the state each year, including $645 million directly to the labor force. And those benefits are coming in all year long — not just for the big name races — with the Speedway hosting up to 300 events annually.

With Daytona International Speedway becoming a year-round attraction, it became clear fans needed a nearby place to stay and play. So, the owners, led by International Speedway Corporation CEO Lesa France Kennedy, built a companion complex across from International Speedway Boulevard, linked by a sky bridge, and developed One Daytona. At the 70-plus acre entertainment center, race fans can eat, shop, play, see a movie, work and stay the night at Fairfield Inn & Suites by Marriott or The Daytona, an Autograph Collection Hotel.

One Daytona includes 16,000 available square feet of Class-A office space for lease, and 276 multi-family residences are planned this year as well.

The Volusia Mall, just across the way from the Speedway, is also getting some redevelopment action. CBL Properties is redeveloping the Sears Auto Center at the mall to include three new dining and entertainment options: Metro Diner, Bonefish Grill and the first location in Florida for The Casual Pint Beer Market. Extra space is available for retail or service as part of the redevelopment.