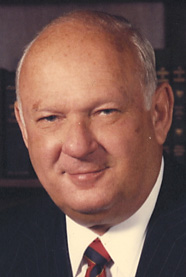 MIAMI – Robert H. Traurig, considered to be the “Father of Miami Land Use Law” and the “Dean of Zoning”, passed on July 17 at the age of 93. A devoted husband, father, grandfather, and great grandfather, Traurig was also one of the three founders of global law firm Greenberg Traurig, LLP, which they started just over 50 years ago and today has more than 2,000 attorneys in 38 offices worldwide.

Traurig was born in 1925, in Waterbury, Connecticut. A few years later in 1939, the Great Depression permanently relocated the Traurig family to Miami. Traurig attended Miami Senior High School and upon graduation enlisted in the Navy, serving as a Navy Communications Operator from 1943-1946. After the war, Traurig returned to the city to attend The University of Miami, graduating with a Bachelor’s Degree in Business Administration. Inspired by his uncle’s law firm, Traurig went on to study law at The University of Miami School of Law. It would be two years after earning his law degree that Traurig would start to practice. First, he returned to the Navy from 1951 to 1952 to serve in the Korean War.

After a brief stint at a local Miami law firm, Traurig began his own practice in 1954. For 13 years, his practice focused primarily on real estate, representing small builders and mortgage companies, along with other corporate and business matters.

In 1967, Traurig partnered with Mel Greenberg and Larry Hoffman to establish Greenberg Traurig Hoffman. Originally lunch buddies, the three recognized a niche they could capitalize on, as each had an expertise in a different area of practice: tax, real estate, and corporate. As a team, they brought a “New York City-style approach” of practicing law to a city on the brink of expansion. Traurig, Greenberg, and Hoffman were committed to working hard and achieving results for clients, and staying active in their local community - creating a firm culture that is still its core today.

“This is a tremendous loss for the community, the legal profession, and for me, personally,” said Larry J. Hoffman, Founder and currently Founding Chairman of Greenberg Traurig. “Bob was unique and a huge influence on all of us at the law firm - lawyers and staff. His accomplishments and contributions to our firm, the legal profession and our community will remain as standards always. Mere words cannot do justice to his role in all our lives and the personal loss we all feel. Through his example of the love of law, family, and giving back to the community, he taught us all how to lead a fulfilling and successful life. It has been my privilege to have Bob as a law partner and friend for over 50 years.”

Miami was a small town when the firm first started, however as the city grew exponentially, Greenberg Traurig was the beneficiary of the booming population, real estate activity, corporate activity, and community growth. But even more important to Traurig was making a difference in his community.

“As a young lawyer, I had an office near Bob’s. Once when he was requesting donations for a charity, he passed by to pick up my donation and I handed him a check and said trying to impress him, ‘I wrote this check until it hurt.’ He looked at me saddened, tore up the check, and said, ‘Cesar, I only want you to write a check if it makes you feel good,” said Cesar L. Alvarez, Senior Chairman. “After thinking about it long and hard, I wrote a bigger check that I gave to Bob the next day. From this simple interaction, I learned a very special lesson about giving that carries with me today and opened the door to my community involvement. This example, like many others, are lessons that will forever be a part of Bob’s legacy and demonstrate his passion for the community and its citizens.”

As a Greenberg Traurig shareholder and founder, Traurig continued to be instrumental in nearly every key land-use case in Miami. He was influential regarding the development of downtown Miami and suburban regions, as well as the westward development to the Everglades. His practice evolved to incorporate a vast number of developers and builders in real estate property and land use matters. He was also active in matters surrounding administrative law of governmental relations.

Traurig, who was the recipient of the Miami-Dade Beacon Council’s 2017 Jay Malina Award for contributions to Miami’s business community, firmly believed in working diligently not only to make the right move for a client, but to produce a product the community needs in terms of professional results and social aspects of growth within the community. Leading by example as a passionate member of the Miami community, Traurig has been a prominent member of many organizations, over the years he served as President or Chairman for many. He has also engaged in significant pro-bono representation of churches, schools, cultural institutions, and social service organizations.

“As a forefather of the firm, Bob took many of us under his wing and taught us how to be successful lawyers,” said Matthew B. Gorson, Senior Chairman. “Not only did he work harder than anybody else did, he had many causes and he would see you and ask you to help. He was our role model, and will continue to be.”

Serving as Co-Chairman with Jim Batten of the Columbus Discovery Commemorative Fund, Traurig’s substantial fundraising campaign benefited the Historical Association of Southern Florida, the Museum of Science, and the Greater Miami Opera. Traurig’s fundraising activities also included the campaign of the Performing Arts Center Foundation of Greater Miami to build the new Performing Arts Center. Further supporting the local arts, Traurig was President of the Greater Miami Opera and later became one of its Chairmen Emeriti. In its formative years, Traurig also served on the board of the New World Symphony.

For many years, Traurig was the Vice-Chairman of the Greater Miami Chamber of Commerce (GMCC), later becoming its Chairman. In 1997, he received GMCC’s Sand in My Shoes Award, presented to a community volunteer who had demonstrated an extraordinary commitment to making Miami the best possible place in which to live and work. Traurig is past Chairman of MCCJ (formerly National Conference of Christians and Jews), and was a recipient of MCCJ’s Silver Medallion humanitarian award. He was also honored by the Ronald McDonald House as one of "Twelve Good Men" for his outstanding community and civic service in 2001.

Traurig was especially proud of his participation in the resolution of issues that caused the boycott of South Florida tourism facilities and activities, and served on the Executive Committee of “Partners for Progress.”

“I am fortunate to have been part of Bob’s influence and tenure at Greenberg Traurig. I am very much a product of his vision, influence, and hard work,” said Brian L. Duffy, Chief Executive Officer. “He is already deeply and widely missed; however, his dream of a better world and legal profession will live for generations of lawyers to come.”

Throughout his career, Traurig was regularly recognized by industry publications, including Super Lawyers, The Legal 500 United States, The Best Lawyers in America, and Chambers & Partners USA Guide. In 2015, the Daily Business Review honored Traurig with its Lifetime Achievement Award. In 2001, Traurig was recognized as one of the “100 Most Powerful People in Miami,” by Miami Business Magazine. For several years, The South Florida Legal Guide listed him as one of “South Florida’s Top Lawyers”. Traurig was also acknowledged as one of “Florida’s Influential” in 2004 by Florida Trend Magazine.

“Bob was the man who many of us have long considered the original ‘soul’ and ‘heart’ of Greenberg Traurig,” said Richard A. Rosenbaum, Executive Chairman. “Many of the values we preach, he lived, and thereby taught us. We would simply not be here, or who we are, without him.”

Traurig lived by a commitment to working hard, working honorably, and working in the best interests of others, not just himself. His legacy will not only continue to inspire Greenberg Traurig, but all of South Florida as a hardworking, community-oriented man with impeccable character.