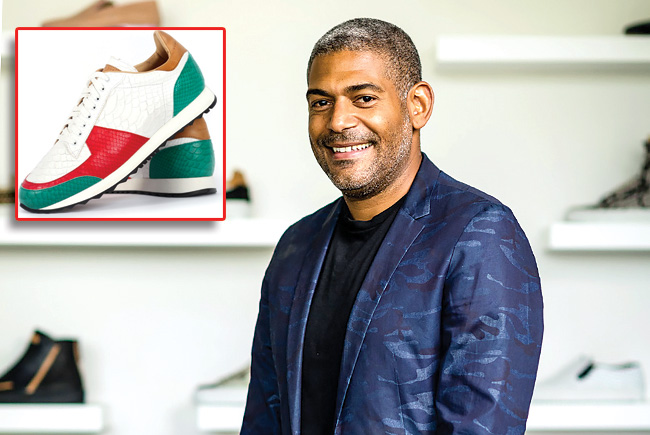 Fabrice Tardeau sells his shoes online and at an appointment-only showroom.

Hand-stitched, leather sneakers made in Italy that cost $298 to $798 a pair are not for everyone, but the creations Miami designer Fabrice Tardieu calls “laid-back luxury” are popular among celebrities, including actor Will Smith, basketball player Dwyane Wade, rapper-entrepreneur Sean Combs and actress Gabrielle Union.

Tardieu launched his eponymous brand in 2014, striking out on his own after working for years with the Giorgio Armani brand in Europe and developing the upscale Bogosse shirt line from Miami with his brother. The Haiti-born, Pariseducated entrepreneur invested all he had in his brand, selling his sports cars and taking public transportation until he could develop his first limited-edition shoes, have them made in Italy and start selling.

Today, Tardieu sells thousands of pairs a year, mainly online and from his by-appointment-only showroom in Miami’s Little River district near Little Haiti. He employs six people in Miami and Italy, not counting the artisans who produce the shoes. His top seller currently: Leather runners with custom rubber soles that retail for $450, often in black or navy blue. He changes designs frequently. Shoes come in plenty of colors, including cobalt blue, red and gold, which Tardieu says reflect the light and playfulness of Miami. — Doreen Hemlock

DORAL — With help from a new bottling process, microbrewery Biscayne Bay Brewing will expand outside the tri-county South Florida region with distribution in Publix from Key West to Indian River County.

ISLAMORADA — Cheeca Lodge Resort and Spa reopened after sustaining about $25 million worth of damage last September during Hurricane Irma.

HIALEAH — Montgomery, Ala.- based Kelly Aerospace Energy Systems acquired AeroKool Aviation, which specializes in repair and overhaul of aircraft valves, pumps and environmental control units, for an undisclosed price.